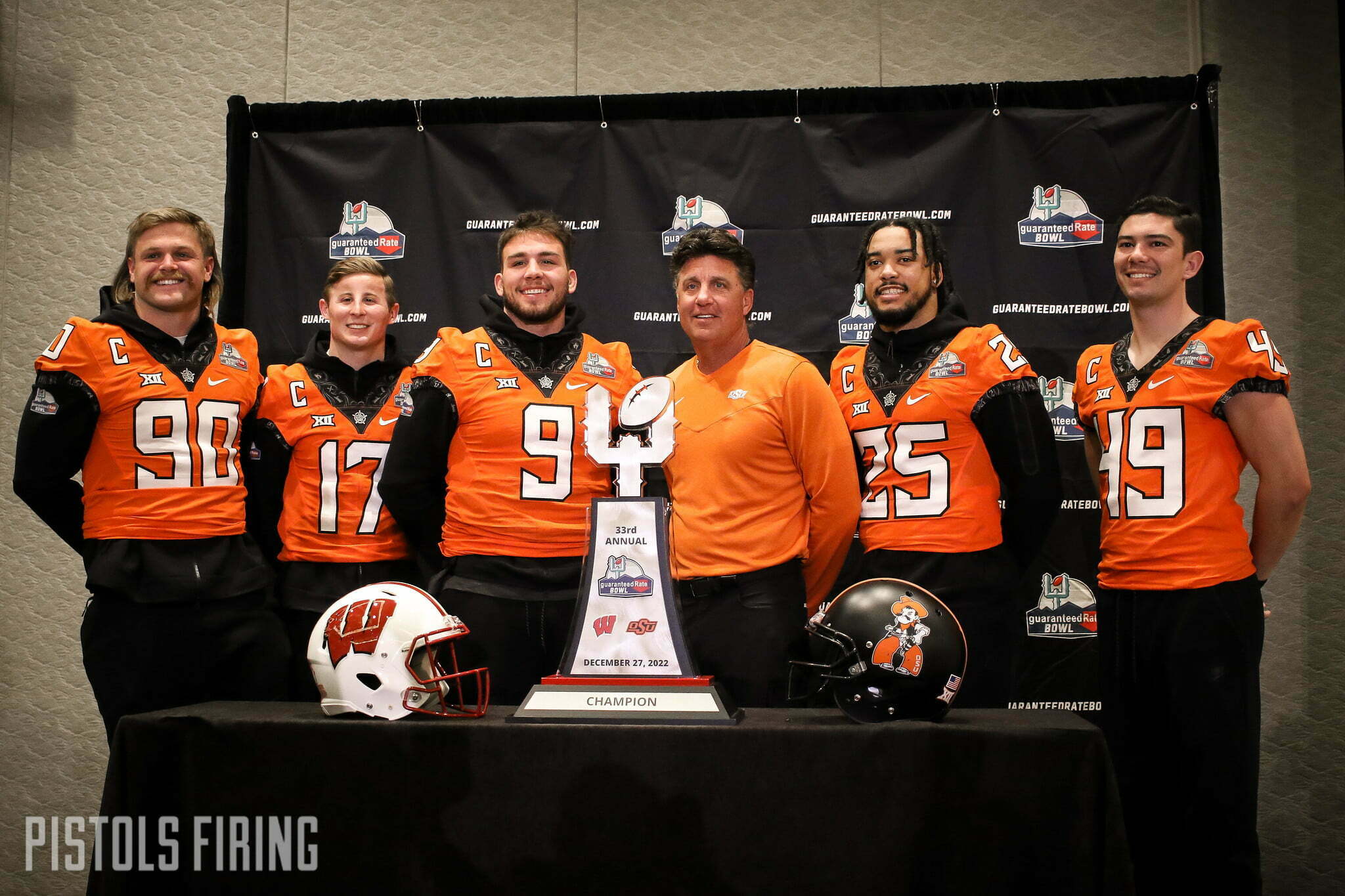 The transfers flocked out droves from OSU in recent weeks (just like most other programs), so on Tuesday night in the 2022 season finale, there will be no Spencer Sanders, no Dominic Richardson, no Mason Cobb. But as Leonardo DiCaprio (starring as the infamous Jordan Belfort!) once said: the show goes on.

And so it will on Tuesday night as the Cowboys take on Wisconsin in the 2022 Guaranteed Rate Bowl at 9:15 p.m. from lovely Phoenix, America.

Here is how our team sees the game unfolding with our final picks post of the season.

Oklahoma State has not played desirable football as of late (to be kind), but there is just something about Gundy in bowl games that I’m not ready to count out yet. Maybe it’s the Christmas spirit (or maybe it’s how good the Arizona weather feels), but give me the Pokes in a tight one where OSU opens up the bag of tricks and sends 2022 off on a fun note — not too dissimilar from 2014.

Both OSU and Wisconsin are dealing with a lot of turnover right now so while the Vegas handicappers have this as a Wisconsin lean (Wisconsin is favored by 3.5 points), I think this is a much more even split than people might be betting on.

Wisconsin is also going to be breaking in a new QB just like OSU but Wisconsin has the questionable variable of how it will play under new head coach Luke Fickell. One would assume that the team would come out firing for their new head coach, but guess what? One would’ve assumed that when Notre Dame did the same a year ago against OSU . . . and one would have been dead wrong.

The big question as ever will come down to quarterback play and how the offensive line fares. If OSU can scoot Ollie Gordon to 100 yards rushing and have a turnover free day from Garret Rangel at QB, it’s a dub. If Gordon can’t get going and Rangel gives Wisconsin short fields, it could get dicey. Hard to know exactly what to expect from a true freshman in this spot.

But OSU is notoriously prepared for bowl games under Gundy and the recent transfer epidemic will I think be added motivation for he and his staff and the players that stuck around to prove that things are fine and still on the ascent in Stillwater. Close game that comes down to the wire and OSU steals it late.

Bowl games are hard to predict. You’ve got oddball matchups with differing styles of play, and then there are the questions of who is playing and how motivated are they. Both of the first two variables are cranked up to 11 this season with the craziness of the portal and the stark contrasts in styles between an OSU team that wants to play fast and air it out and a Wisconsin offense that rushes the ball one and a half times per every pass attempt.

The Cowboys haven’t scored more than 20 points since the Texas win on Oct. 22 and the Badgers haven’t scored more than 23 since the same date, and both teams lost their starting quarterback to the portal since they last played. So I have a hard time predicting a shootout. But if the Cowboys can check some of the boxes that the guys laid out above, I think they’ll end this season on a higher note.