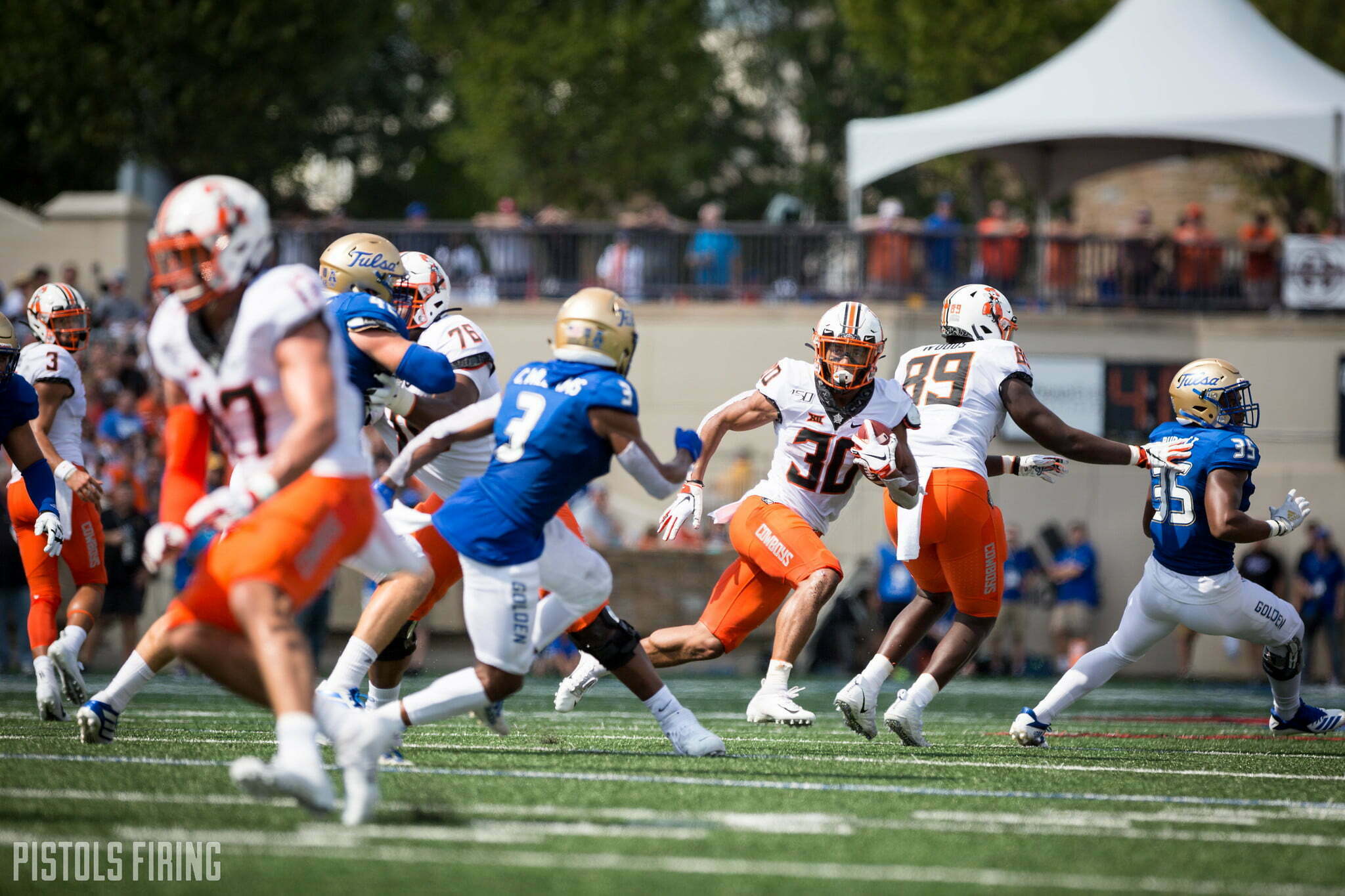 The PFB staff got together for a bye week addition of the PFB Roundtable to take stock in the first half of the football season and then to peek forward toward hoops.

Kyle Cox: Give me your biggest disappointment in and your biggest source of encouragement from OSU’s football team through six games.

Cox:  Starting with the negative, I’ll be broad and say the passing game. Spencer Sanders hasn’t taken off on the meteoric rise that most of us, probably a little unfairly, expected. And the offensive line is probably in the same boat. Injuries have been a big part of that but, on the whole, the passing game hasn’t been as good as advertised, even before Sanders’ TO-filled last two games.

Boone: Biggest disappointment I think is the letdown at Tech. Team was flat, got outhustled and didn’t look up for the challenge. That’s a missed opportunity. Biggest source of encouragement is Chuba. Is there another answer? He looks way better than even I thought he would, and I was on board with him being a superstar before the season.

Kyle Porter: Biggest disappointment thus far is the lack of use of Sean Gleeson. I’ve seen nothing since the Oregon State game that I didn’t think Tracin Wallace could have called from underneath that yellow Nike lid on the sideline. That frustrates me, especially after how dynamic they were against an Oregon State team that is 2-3 overall and doesn’t appear to be all that bad thus far.

Marshall Scott: I’d say my biggest disappointment thus far would be the inconsistencies offensively, and that’s not just on Spencer Sanders. Like you mentioned, OSU’s offensive line has been a roller coaster thus far this year, and Saturday in Lubbock was definitely a valley. In terms of encouragement OSU’s defense has been pretty good. It didn’t have the greatest second half in Lubbock, but Jim Knowles’ bunch held OSU in the game in the first half. Amen Ogbongbemiga and Malcolm Rodriguez in particular have been solid.

Cox: I’ve been encouraged by OSU’s defense for the most part. It’s definitely not arrived either, but has been better than I probably expected.

Scott: I’m getting better at saying all the names, too. I think my favorite to say is Tuihalamaka.

Porter: Chuba has obviously been encouraging. I cackled when Weeden said on our podcast that he’s made this OSU offensive line look better than it actually is, but I think it’s probably true.

Remember when Gundy said the OL graded out as high as he’s ever seen at OSU after Corvallis?

Cox: Must be repressed memory.

Porter: Marsh was there!

Scott: I loved how blunt Weeden was. I think OSU’s O-line is good in its inside zone stuff, but there is glaring room for improvement particularly in pass protection.

I was sitting three feet from the man, and in his defense, OSU’s O-line looked great in that Oregon State game.

Cox: No, I do remember. I was just being flippant. They looked good against Oregon State. I was more surprised that he went out on a limb there.

Boone: That does feel like forever ago. I still have faith in the offensive line (and by extension, in Charlie Dickey). Injuries have played a significant role in the regression of that unit.

Porter: Chuba is breathtaking though, I feel a sort of bummed-out feeling that his last season in Stillwater will end up being a semi-wasted on. He deserves all the spotlights.

Cox: We might not be having this convo if Jenkins and Galloway don’t get hurt… And Spencer probably has a couple less TOs.

Porter: Yeah, they were not great against Texas either though.

Cox: Chuba has been impressive. I thought he was good-to-pretty good, maybe really good. He’s blown me away thus far.

Scott: I tweeted this out during the game Saturday, but if Chuba was at Alabama, there would be no question who the frontrunner for the Heisman is right now.

Boone: You couldn’t pay me to pick Texas this weekend. That team still screams 8-5 to me. They look totally average.

Scott: I think it could be an awesome game. Sure Texas has a loss already, but Texas has played a tough schedule to this point, and this is the first solid team Oklahoma is actually playing. Wouldn’t be surprised if UT starts quickly because it is more used to the level of play.

Porter: OU will smoke them, I think.

Cox: Okay, moving on to hoops. What’s the No. 1 thing that has you excited for OSU basketball this year?

Porter: No. 1 thing — I cannot believe I’m saying this considering how I talked about him last year — is Yor’s two-way ability in this league. I think there’s potential for him to be elite! Not saying it’ll definitely happen, but I think it’s in play.

Cox: I’m excited about that too. He really developed around the rim last year down the stretch, both ways.

Boone: I’m excited for Marcus Watson. Every time I talk to people at OSU, there’s new buzz about how he jumped out the gym for a sick dunk or how he looks the part of a junior and not a freshman. He might not be a statistical superstar this season, but I get the feeling his athletic gifts alone are going to be awesome right away.

Scott: Yor was absolutely dominant at the end of last season. If he can just keep that level of play up he’ll be a star. I’m scared to think of him getting even better.

Cox: I’m generally excited to see what Boynton can do with a full roster (knocks on wood). We really haven’t seen that yet. Add in your Marcus Watsons, and Boones and Avery Andersons and I just wanna see these guys on the court.

Porter: @Marshall Scott who’s been the most complete newbie so far?

Scott: I’ve been to two of their 10 practices thus far, and I’d point to Avery Anderson as a guy who has stuck out. I think this summer Watson was the obvious choice just because body-wise he was so much further ahead than his classmates. With that said, Watson has a lot to learn in terms of being a college basketball player as opposed to just being a better athlete than everyone else. But Anderson fills a spot in that he is a shifty, pass first point guard who also loves to play defense.

Boone: Definitely excited for Anderson. Curious to see how he and Ice co-exist. Both are going to get big minutes just because the talent, but I think Anderson might be a more true point with the distributing, handles, etc.

Their practices are exciting as well. They are competitive. Thomas Dziagwa and Cam McGriff in particular don’t want their group losing in the scrimmage portions. A lot of smack is talked. It’s friendly, but it’s friendly in a way that you want to be the one talking it and not taking it.