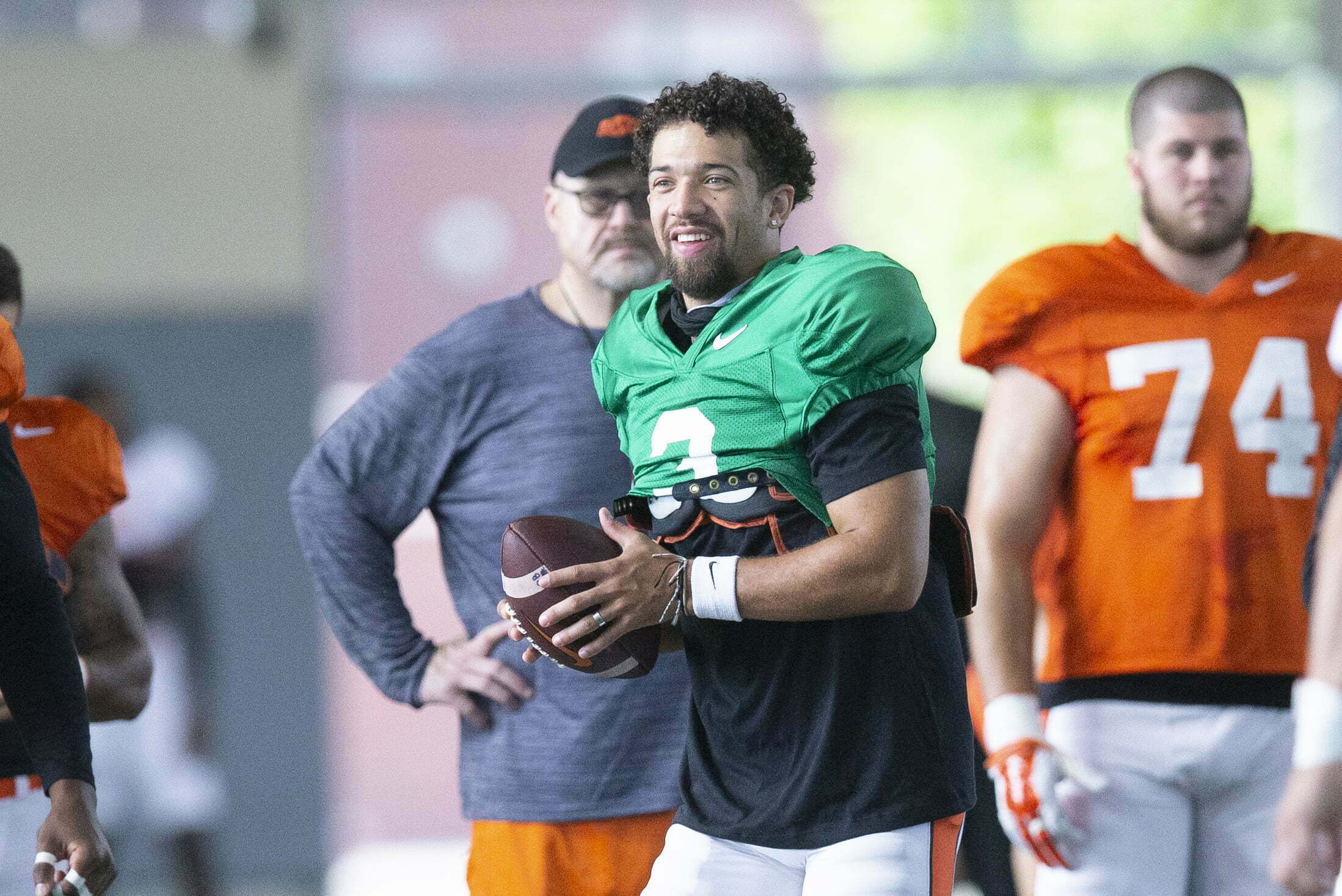 With just a few weeks left until OSU kicks off its 2021 season, it was time for the Pistols Firing staff to get together and discuss what’s surprised us so from from camp, what we’re excited about from the Cowboys and where we see them headed post OU-Texit.

Kyle Boone: What is one thing that has surprised you in fall camp through two weeks?

To me I think it’s the emergence of Tay Martin. Thought he could be a target hog replacing Tylan Wallace, but there seems to be a very distinct possibility he’s the leading receiver on this team. Did not think that was possible entering camp because of how talented Brennan Presley is, but playing outside in OSU’s offense is almost always a guaranteed way to put up massive numbers.

Marshall Scott: I would say that it seems like there is going to be some major youth at that X receiver spot. We all knew OSU was going to lose Tylan Wallace, Dillon Stoner and Landon Wolf, but with how full Kasey Dunn keeps his cupboard, it’s interesting that the guys he mentioned to play out wide are Blaine Green (true freshman), Bryson Green (true freshman), Langston Anderson (redshirt sophomore) and Jaden Bray (true freshman). It’s always exciting when young players get an early shot, and it seems that’ll be the case no matter how that position shakes out.

Kyle Cox: Since Boone stole mine I’ll go with just how much confidence there is surrounding the offensive line. I think we all knew the group would be more healthy this year, but if you listen to some of the noise coming out of camp and this could be one of the deeper, more talented lines Gundy’s had in some time (even after losing out on a second-round pick in Teven Jenkins), which should be music to Cowboys fans’ ears. The additions of Danny Godlevske and Caleb Etienne could benefit OSU sooner than expected.

Boone: For sure. Speaking of skill positions, since that’s apparently at the forefront of our minds, what in the world are we expecting at running back this season? LD Brown is the elder statesman so I figure he’s the starter. But there is so much talent between Dezmon Jackson, Jaylen Warren and Dominic Richardson, so how OSU uses them seems unclear.

Cox: I’m excited to see what Warren can do. If you listen to coaches — or like me have repeatedly YouTubed his Utah State reel — you know he’s a downhill runner who can find a crease and capitalize. If the OL is really that much improved, OSU could be fun to watch in the ground game.

Scott: I’m excited to see Warren in live action since he’s the most unknown of the group to the vast OSU fan base, but I’ve heard nothing but great things about him. I have no clue how everyone gets their touches, but it’s a good problem for OSU to have. I asked Gundy about how as a staff they manage that, and he said back in the day it would be an issue, but these guys seem aware that they need to be healthy to have shot at playing pro ball. I’m team LD, though. He has watched Chris Carson, Justice Hill and Chuba Hubbard, all NFL Draft picks, and is finally getting his time in the sun.

Boone: Yeah I think it’s pretty fascinating. I’m not sure OSU has ever really embraced a true committee approach with this many tailbacks but that’s the word Gundy has used talking about this position. At some point I think someone will emerge as the primary ball-carrier — and my guess it’s between Dezmon Jackson, Jaylen Warren and LD Brown — but to lighten workloads, avoid injury and ensure every bit of talent is squeezed out of this group, it does seem like each of the four will have some sort of role.

It’s a fantastic problem to have. If Dominic Richardson is, like, your third or fourth option, then you can be darn confident your other options are prettay, prettay, prettayyyy good.

Scott: Brown, Jackson and Warren are all redshirt seniors, too. So, this gets really interesting next season.

Cox: And Dominic might be my favorite of the bunch. The good news is that, unlike many years in the past, OSU should have reinforcements in the trenches and at tailback.

Boone: I’m not trying to jinx it but yeah, because of that, I’m cautiously optimistic 2021 should be pretty solid.

Marsh mentioned some old heads in the RB room, but let’s talk old heads elsewhere — who are the incoming transfers that you think are most likely to make an early impact?

Cox: I already mentioned Godlevske but it seems like he might be the most important newcomer on the team with him now looking like Center 1. C1? I’ve never typed that before, but an experienced snapper who has apparently picked up the offense so quickly is an underrated boon for Spencer Sanders and OSU.

Boone: For my money, give me some Austin Jarrard stock. Maybe not a day-one starter. Heck, might not even be a starter. But 6-foot-3 tight end who has JUCO experience and profiles as a reliable pass-catcher. Think he gives OSU a dynamic in the passing game no other tight end brings to the table for OSU.

Scott: We’ve already mentioned Tay Martin. He’s the easy answer. As far as guys who just got to Stillwater ahead of this season, Godlevske and Caleb Etienne are probably the best bets to provide some stability for OSU up front.

Jarrard is also interesting because outside of Logan Carter, OSU is inexperienced at Cowboy back. Gundy has mentioned Jarrard a few times, but he was a late arrival. So, he is still very much in the learning process.

Boone: Etienne’s physical profile is absurd. Very intrigued. As tall as an NBA power forward yet still as wide and strong as probably anyone in the OL group. If you can make Victor Salako look small you’re probably built to play in the NFL.

Cox: We haven’t even mentioned a defense that returns a ton from last year and threatens to be even more salty.

Boone: Right? As a lifelong OSU observer, I think I’m scared to acknowledge it. It goes against everything I know that OSU could have two consecutive seasons with a top-20 defense.

Scott: I think a lot of it will hinge on that second corner spot. Rodarius essentially took away teams’ top targets last year. Not saying Korie Black or Christian Holmes or Jabbar Muhammad will have to do the same, but depending on how big a drop off that is, I think, will determine how good this defense can be.

Boone: Yes, 100% agree with that. Everywhere else on the defense looks solid if not super, though — from linebacker to safety to corner to defensive line. It’s pretty remarkable, really, but it seems clear right now that the defense is quite clearly the strength of this team.

Boone: cuts down tree in back yard

Scott: OSU is two-deep (at least) almost everywhere on defense. I’ve heard really good things about Mason Cobb at LB. Then the defensive line has about 19 interchangeable players. I think I’m OK with saying it’s unjinxable.

So long as that corner spot gets figured out.

Boone: I weirdly feel good about the second corner spot, too. Like, your options are a senior who played last season or a pair of young guns who were really exciting high school prospects.

Scott: And on top of that, whoever it is will have one of the best group of safeties in the country backing them up.

Cox: Now we definitely need to pump the brakes. I’m getting way too high on this team in August.

Boone: One for the road: What’s OSU’s future looking like now? The SEC is adding OU/Texas, the Big Ten, Pac-12 and ACC are talking alliances, and the Big 12 is left on the outside looking in right now, it seems …

Cox: I have no clue. I think I’ve hit information overload on the conference stuff. I would prefer OSU to land in the Pac-12 or Big Ten if that’s possible because I think any watered-down version of the Big 12 that does remain will be relegated to near non-Power league status in the opinion of most (including the CFP committee).

Scott: I have … no idea. I don’t know what the three-conference alliance would entail, but that seems like a lot of work. So, maybe that breaks down at some point and the Pac-12/Big Ten rumors kick back up. If the Big 12 stays together, I think I’m in favor of adding: Houston, Memphis, BYU and Cincinnati. Houston is a non-negotiable, I’m pretty firm on Memphis, but I could probably be swayed on the other two.

Boone: When we did this three weeks ago, each of us said the Pac-12 was the most likely landing spot for OSU. Cox and I said the AAC was the second-most likely. Now I think I’d flip that order. With the SEC likely set at 16 and the other three major conferences potentially forming an alliance, I can’t envision expansion at the power level between the ACC/Big Ten/Pac-12/SEC, which would mean OSU is stuck potentially in an expanded Big 12 with some American schools or moving on to the American in its expanded league. Neither path seems great!

Scott: I don’t think the twists and turns of this saga of realignment are over.

Boone: Same. Not sure if I’m excited about that or not. For OSU’s sake, I hope things shift and sway in the next few months.