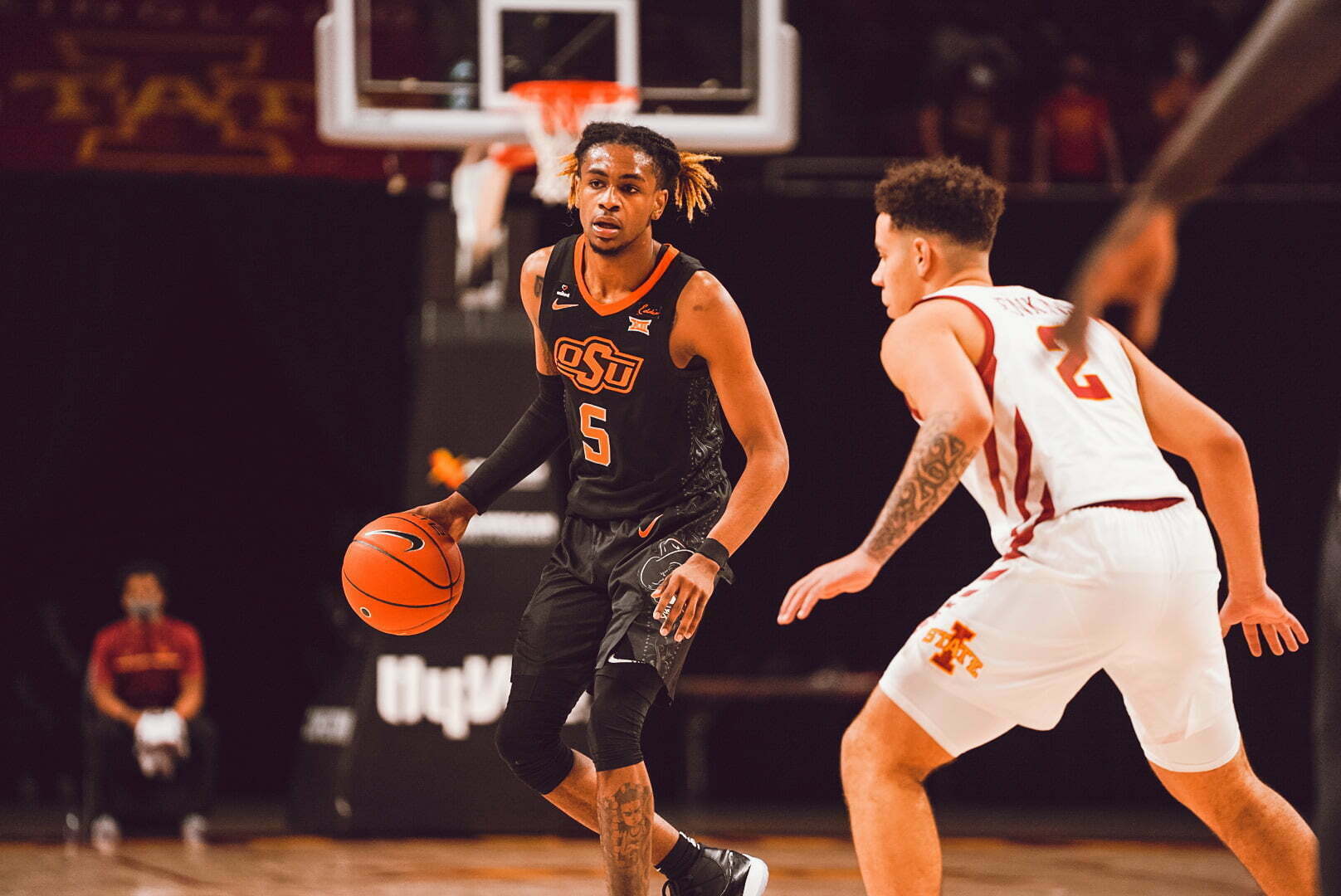 The Cowboys bounced back on Monday against Iowa State thanks to career games from a pair of freshmen in Cade Cunningham’s absence. So the Pistols Firing crew got together to discuss those big performances and to look forward to this Saturday and beyond.

Here’s the Slack transcript of that chat. Hope you enjoy.

Cox: I’m joking of course, but I lovvvve watching him play. And I think the Baylor game is closer down the stretch if he was available.

Marshall Scott: Haha! I think he is a three-year guy at least, which is excellent for OSU. If he can knock down his 3-point shot consistently, he might be the prototype for a 3-and-D guy.

Boone: I don’t think it’s a totally unreasonable question is the thing. He might be in the NBA in the not-too-distant future. He probably needs to improve the 3-point accuracy to really be a prospect, to Marshall’s point, but quick release, decent size, First-Team All-Hustle … all that stuff translates.

Selfishly, I hope he doesn’t get onto the NBA radar for another few years, though. One of the most fun players on this team and easily the most fun to root for. Great kid.

Scott: Full GIA is going to love him even more than OSU Twitter does.

Cox: Speaking of freshmen who went off in Ames, Matthew-Alexander Moncrieffe is also fun to watch. But it will be interesting to see how his game translates. OSU will probably use him as a front court player for now but he’s only 6-7. Reminds me of Le’Bryan Nash in that way, though MAM is more athletic I think.

Boone: Yeah, lost amid Cade’s two game absence is that MAM has kinda been unleashed. We’ve seen a lot more of him on the ball, and he’s really blossomed as a guy who is almost always around the ball to pick up offensive rebounds or loose balls. I don’t totally know what he is — he’s super unique, and there’s not a 1-to-1 comp — but I know he’s very athletic and finding ways to make an impact as a freshman in ways I didn’t totally anticipate.

Scott: I asked Boynton after the game a little bit about that. He said he will obviously always continue to recruit size. These past two games MA has really taken advantage of OSU’s two-post sets. It forces the other team’s center to guard Kalib or Kouma, and MA gets to eat some shorter defender alive.

Boynton compared his skillset to Draymond Green after the Iowa State game, which I thought was solid.

Cox: Can he shoot, though?

Scott: Minus the nut kicks.

Cox: And can he kick?

Scott: That’s his biggest room for development. I saw some high school tape of him hitting outside shots, but college outside shots are different.

Boone: Draymond’s basketball smarts and feel are totally ridiculous. But if MAM can become even half the passer/defender Draymond is, holy smokes.

Cox: So there’s this other freshman we haven’t mentioned. Assuming Cade’s back for Arkansas, do you think the “others” can continue to contribute somewhat like they have in his absence?

Boone: Doubtful, but that’s fine. Cade gonna cook. Anytime you have the ball in his hands is, more often than not, going to be a winning possession.

Was rewatching some of his last few games before he sat, and OSU is using him in a lot of sets as the PF — and essentially running its offense through Cade out of the middle of the floor. That probably explains in part why MAM has suddenly been unlocked (and also why Cade’s assists aren’t ridiculously high like people expected).

Scott: OSU has played small most of the year because of all their guard depth, but I wonder if this stretch will make Bonyton want to play big for stretches. Something like Cade, Ice, Walker, MA and Kalib. That’s a looonng group.

Boone: I like the idea of playing big, but in practice, Cade is already facing double- and triple-teams when he attacks the rim. Anything that might clog the lane more than it already is sounds like a terrifying proposition.

Boone: Although … give me some more Kouma. Another guy who I have no idea what he can be, but he’s kinda interesting!

Scott: Kouma knows his role, which (apart from his size) is his best attribute. He’s gonna tower in the paint and drop guys with his screens. He has been fun to watch develop.

Cox: I think the encouraging part is that this team still has a lot of room to grow and a higher ceiling. If things fall right (and they stay healthy

), they could be dangerous come March. What a thought.

Scott: Yeah, the best time to play this team was early with all the new pieces learning to mesh. The Pokes’ schedule is tough down the stretch, but this should be a lot of fun.

Boone: On the right path to get into the Big Dance, but they’re gonna need to stack a few quality dubs along the way, too. Just thinking about those road trips to KU and Baylor give me the nervies.

Cox: The chance to cover March Madness sounds fun, Boone will have to remind me.

Boone: KenPom projects OSU to finish 9-8 in league play. That should be good enough to get in, I’d think.

Scott: That’s if they don’t reschedule West Virginia, a team I think OSU is better than, honestly.