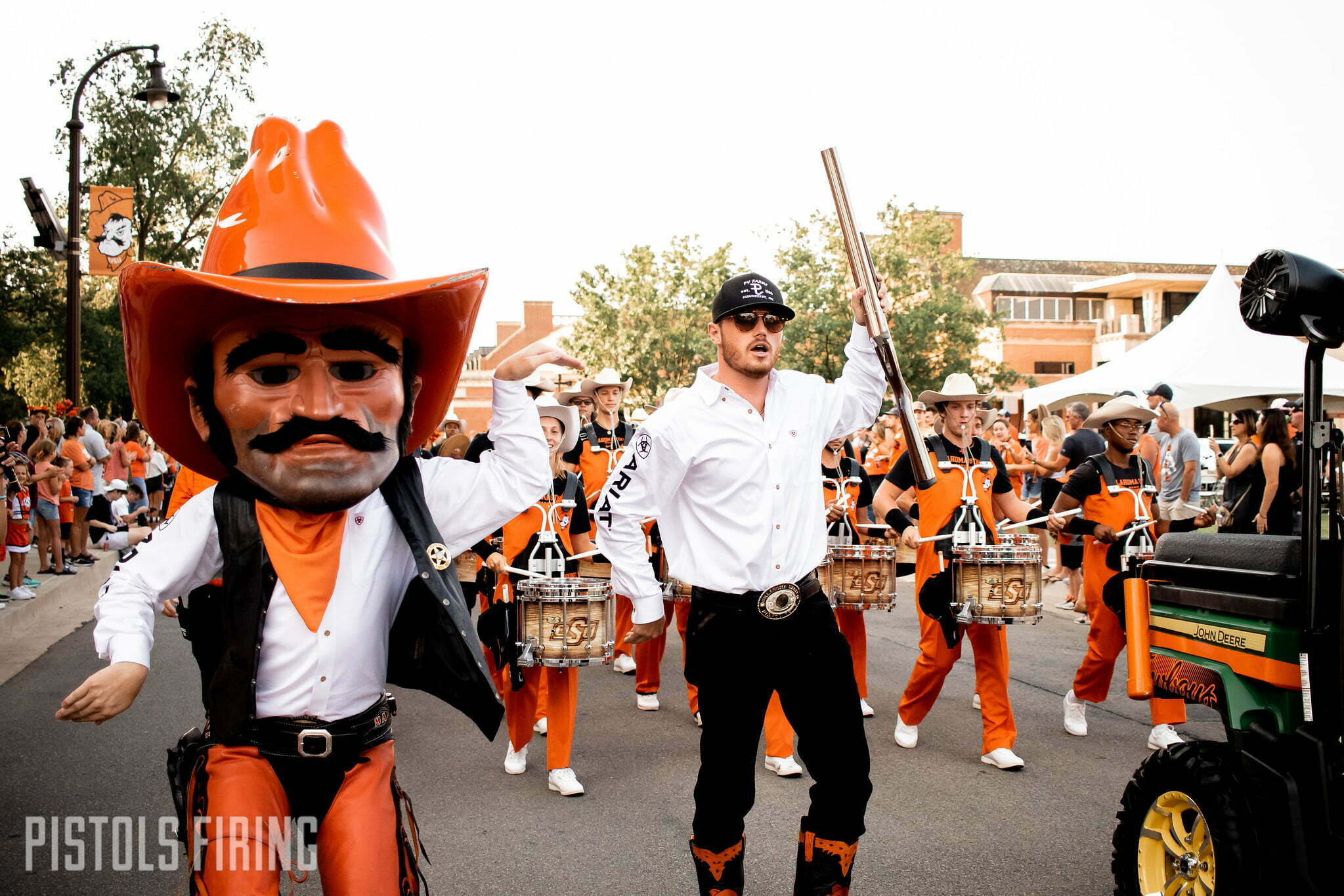 The Cowboys are back in action in Austin this weekend with their undefeated record in jeopardy against a Longhorns team fresh off of a heartbreaking rivalry loss. The Pistols Firing crew got together to talk about the Cowboys’ biggest test to day.

How many points does OSU have to score in the first half to not give OSU fans high blood pressure in the second?

Kyle Boone: If OSU can just lead at halftime I’d feel weirdly confident. It is 35-5 in its last 40 games when leading at half. The magic number is probably, like, 21?

Cox: I’m confident in this defense but maybe not quite that confident. UT can put up points in bunches. I would feel better if OSU was up by at least a touchdown AND the Cowboys were able to move the ball effectively. Then again, the second half has been when the Pokes’ offense has stumbled thus far. Maybe nothing will make me feel better until it’s over.

Marshall Scott: I think high blood pressure will come no matter how many points OSU scores in the first half. It’s the way for this 2021 team. Plus, the UT team can score in bunches. It’s fun to joke about Texas, but this particular Longhorn bunch has figured out offensive football.

Cox: This teams reminds me of the 2015 Cardiac Cowboys more and more as we go on. Not necessarily in the way OSU is made up, but this just feels like a team that might keep win some games it shouldn’t. I don’t know that I’d pick these Cowboys to start 10-0, but I think this team might be better-equipped to face the toughest teams on its slate, which starts Saturday.

I guess that’s not a question, but tell me where I’m off-base.

Scott: I think there’s a realistic chance that if OSU pulls out a win in Austin, they’ll be favored up until Bedlam, so starting 10-0 isn’t too out of the question at this point.

Boone: Reminds me more of 2013 only in that 2015 felt fluky at times. 2013 team was legit amazing — especially on defense like this one — and had real poise and experience like this team does.

Cox: I like the 2013 comp. Hopefully less QB rotation is needed.

Boone: I don’t think this team starts 10-0, because the schedule from here out is brutal. But if they did it wouldn’t be the most absurd thing. Gonna depend on health at receiver, Spencer’s decision-making and general competence on offense. We know the defense is great.

Cox: The offense is the question, which I still have not quite gotten used to. Even that 2015 team that couldn’t rush the ball or score in the red zone without a QB sub was able to hang 50-plus on teams. I’m not sure this group can put together enough consecutive quarters on offense to hang in a shootout like that. Hope I’m wrong.

Boone: Yeah and it’s a number of factors too on offense, health being the most important. I have a feeling they’ll find a groove now that they’ve established an RB and seem to be nearing full health at WR.

Scott: It’s weird because I think the offense is close, but I’ve thought that for like a month. Jaylen Warren has been remarkable, Tay Martin has been good and Spencer Sanders has shown spurts. It’s just a matter of getting it all going at once.

Cox: Gundy has stated publicly that this is not the intention, but I wonder too if there’s not some coasting (for lack of a better word) when you’re depending on your defense and field position to finish a game. If that’s been the case so far, it better not be on Saturday. Looking at the ‘Horns start against OU, this might be a moot point if Texas rattles off four TDs in the opening period.

Boone: I think they’ll have a good offensive game plan given they’ve had two weeks to prep. If they look flat in the first half I’ll be ready to sound the alarm bells.

Scott: I agree with that, but I also think this could be like 2017 game where OSU goes full turtle and waits for an overtime interception to save the day.

Cox: If that’s the case I might go full turtle.

Scott: That was my last trip to Austin, so maybe I’m just having some PTSD.