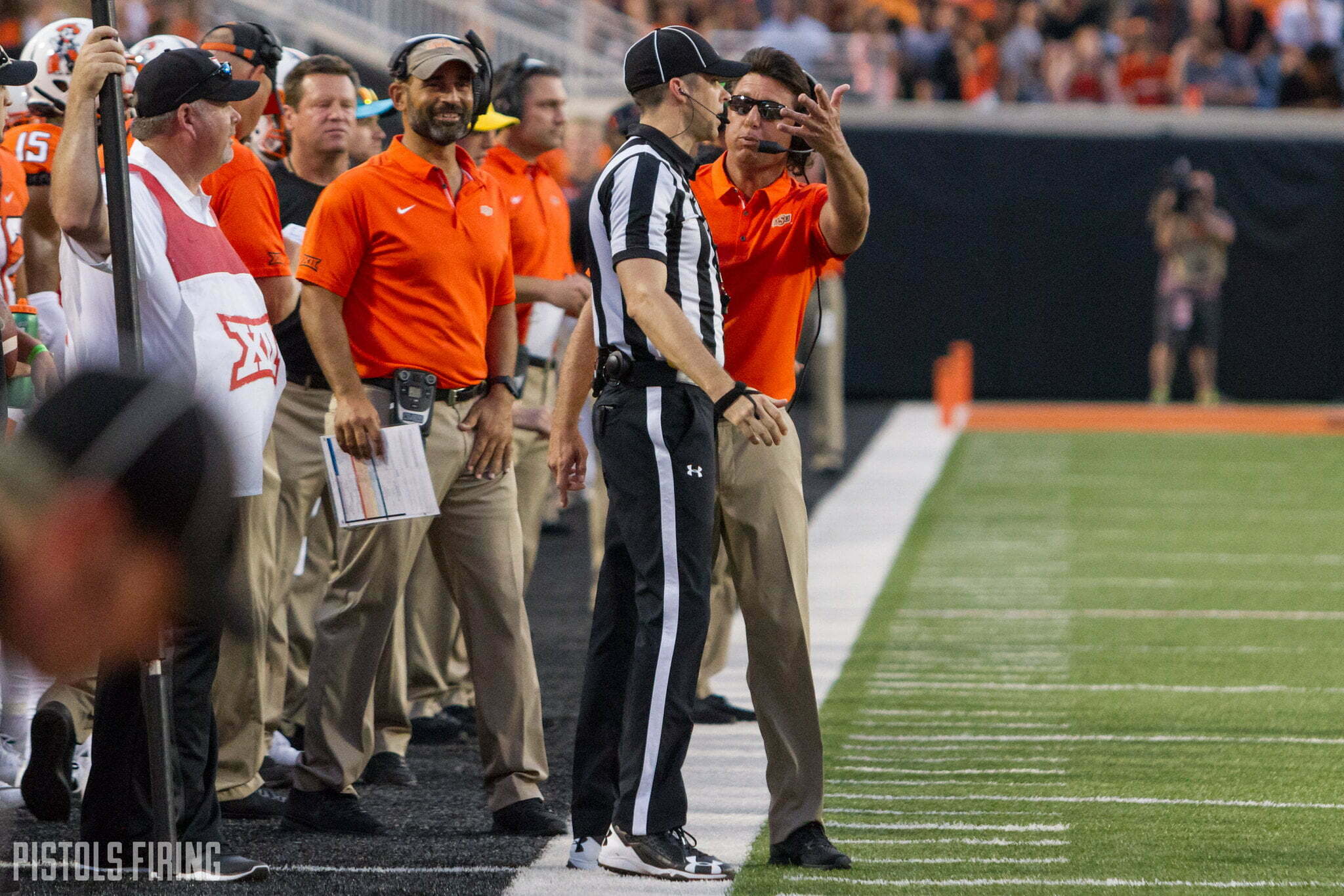 The Big 12’s preseason media poll was released on Thursday, and the Cowboys were picked to finish fourth behind Oklahoma, Iowa State and Texas.

The Pistols Firing crew got together to discuss our thoughts on those predictions and share a few of our own.

Kyle Cox: I guess we should just start with our instant reactions. What do you think of OSU being picked fourth in the Big 12 preseason poll?

Marshall Scott: I think it is justified. OSU has finished the past two seasons in fourth. I dare to say in reality, the Pokes are probably better than Texas considering the Horns will have a new coach and QB. But, I don’t think anyone can be too outraged with fourth.

Cox: I think fourth is about right if you’re looking at the league from a bird’s eye view. OU is tops and Texas will be penciled into the Top 3 every year regardless of merit (but they might actually be good this year) and Iowa State looks like the better team on paper.

Kyle Boone: I think fourth feels right. OSU has some pretty big question marks (no Chuba, no Amen, no Tylan). I think Texas being third is pretty lol-worthy, though.

Cox: No faith in Sark?

Boone: I’m sure Sark will be an OK coach but Texas doesn’t even know who its QB will be. Seems like a fairly important piece to the puzzle.

Boone: Yes, yes they did. Then they had five players from that team drafted and lost their four-year starting QB!

Cox: I think Casey T > Sammy E. And they haven’t had a QB since Marsh was in middle school.

Boone: Texas might finish third in the Big 12 this season but the logic people landed on to pick them third is pretty silly, is all. If OSU was in the same situation they probably wouldn’t be a top-five preseason team in the Big 12.

Scott: I can agree to that.

Boone: All of this feels irrelevant because OU is going to win the league again, right?

Scott: I think Iowa State has a chance.

Cox: To get back to Arlington.

Boone: OU has maybe the best player in the country, the best offensive mind in the country in Lincoln, a revamped D that should again be good, and dudes upon dudes at WR. Depressing.

Cox: Which team in the bottom half of the poll is most likely to end up in the top half?

Scott: Kansas State, for me. Skylar Thompson is back for his ninth year, Deuce Vaughn showed a lot of promise and Klieman is good at beating OU.

Boone: I think the answer is actually “literally any team but Kansas State.”

Boone: That song does kinda slap, though.

Cox: How I feel right now about that vid, that song, trying to understand the term “slap.”

My pick: West Virginia might be a top half team. Jarrett Doege and Leddie Brown both No. 2 passer and rusher back. Plus 14 total starters returning. Who knows how good the Mountaineers defense will be but they seem like a tougher out this fall.

Boone: I would go Baylor. They obviously sucked last year. And losing Charlie Brewer doesn’t help things. But talent wise, that’s probably a top-half-of-the-league team if Aranda can figure some things out. They were competitive last season they just lost a lot.

Scott: The All-Big 12 Preseason Team also came out Wednesday, with a glaring omission. How does Tre Sterling keep getting disrespected?

Boone: There is a pretty decent case to be made that Sterling should’ve gotten inclusion over KHP. But, honestly, both should’ve been on the list. I don’t get it.

Scott: This shows just how ridiculous it is:

Boone: I actually didn’t have many bones to pick otherwise. Sills and KHP getting preseason nods feels right.

Scott: A couple other “could’ve made its” from OSU were Malcolm Rodriguez and Trace Ford. Ford’s injury late last season certainly didn’t help. You’d think he’d be a lock for this next season.

Scott: Trace Ford sounds too easy, so I’ll say someone else who is too easy in Brennan Presley.

I’ll actually go with someone who earned an All-Big 12 honorable mention last season despite sitting the last five games of the year.

Alex Hale’s six games did not qualify him to be included in CFBStats.com’s Big 12 ranking, but he would have led the league with his 92.9 percent field goal rate (13-of-14). OU’s Gabe Brkic (20-of-26 for 76.9 percent last year) was the preseason all-conference pick. Hale would have had to miss six of his next 12 to get caught by the Sooner.

Boone: I think I’ll go Jarrick Bernard-Converse. He leads the team in most consecutive games started entering the season with 33 (!). With Rodarius NFL-bound I think he’ll be CB1 with a bullet and could make a leap from really solid to potentially great.

Scott: OSU is so deep in the secondary. So long as that second corner can be solid, I guess.