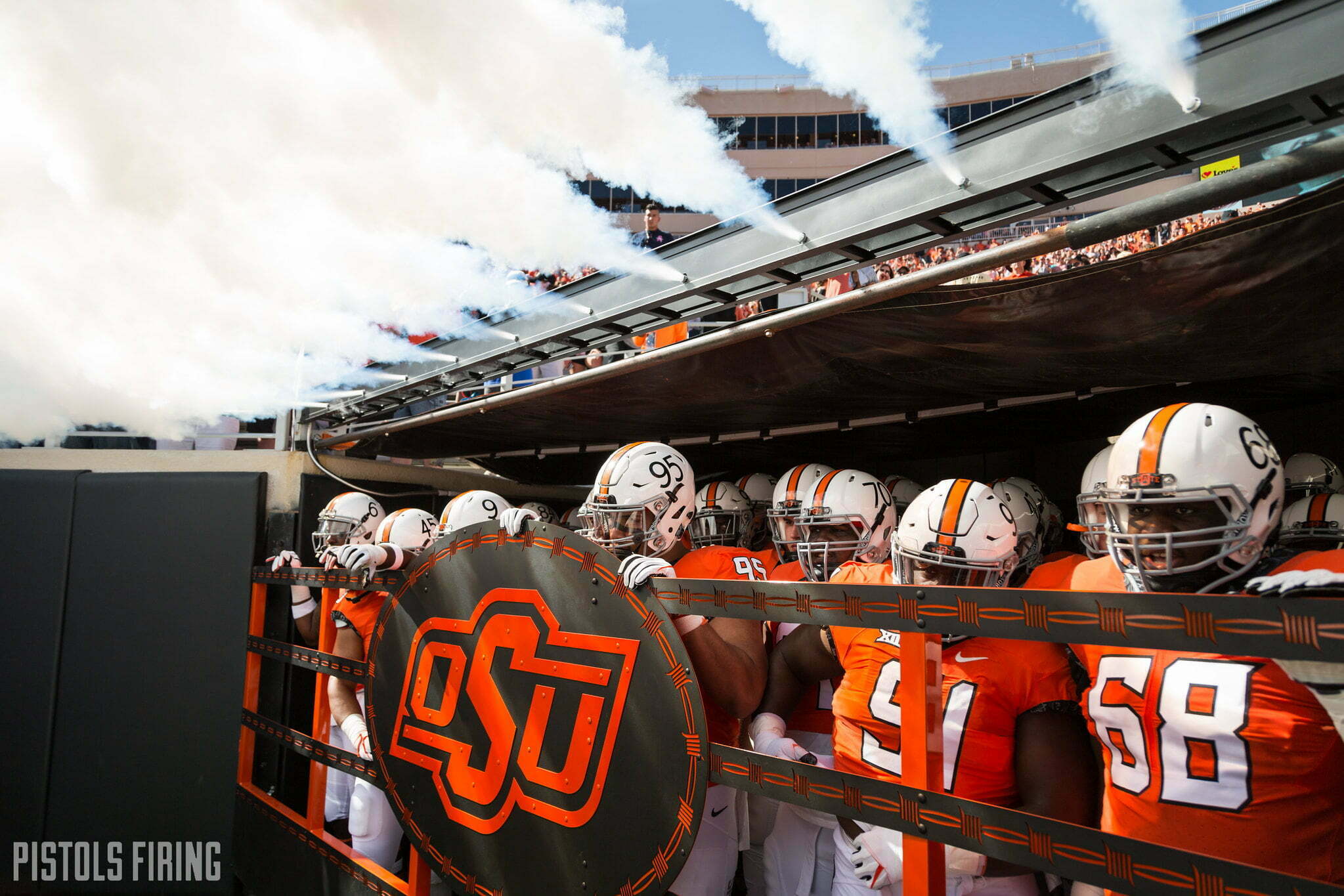 OSU’s fall camp is right around the corner and the PFB staff has been eyeing the Cowboys roster looking for holes. This question was posed — “If you could take any Poke from history and add him to the 2019 roster, who would it be?”

Here’s what we came up with.

Kyle Porter: Which former Poke would you put on this 2019 OSU team if you could add just one (let’s say non-QB division).

Kyle Cox: That’s hard to beat, but for the sake of conversation I’ll go with Kevin Williams.

Porter: Cop-out answer from a millennial!

Scott: I believe I’m Gen Z if we’re getting technical.

Cox: OSU is losing all of its defensive production up front and he (Williams) might break an NCAA sack record in Jim Knowles’ defense.

Scott: But yeah, as far as a position of need goes, I think you have to go with a defensive lineman. I was thinking Emmanuel Ogbah if I couldn’t say Barry.

E-Man would be huge though. I kinda feel like OSU might have a handful of solid dudes up front, but I’m not sure they have a dude.

Porter: I was going to say Ogbah as well. But I could also be talked into somebody like Shaun Lewis. Feels like they don’t have any great leaders in the heart of this defense. Maybe that changes two months from now, but that’s where I’m at right now.

Are we in any way overrating the inexperience on the defensive line? Almost feels like everyone has swung too far the other way but maybe that’s just me.

Scott: Yeah, I’m with Cox in saying that OSU’s D-line might be solid, but I’m unsure if there is one guy offensive line coaches are going to need to scheme around. Scott, Antwine, Martin, all of those guys look to be solid this year, but an Ogbah-type could really put the group over the top.

Cox: I’m with you there Porter. The lack of leadership showed up on the field last year and all those upperclassmen are mostly gone.  Maybe that’s a good thing, though.

Porter: Like, sure, I’m worried about it, but I don’t know that it’s the black hole everyone thinks it is. What if Israel Antwine is elite?

Cox: He might be. He sounds like he walked in and owned the room from a physicality standpoint.

North and the south.

Cox: I’ll throw another one out for consideration — Russell Okung. Imagine if Mason Rudolph had a guy like that protecting his blind side from Day 1. Spencer Sanders could win a Heisman.

Porter: That’s a good one. It’s never sexy to talk about the offensive line, but it’s a drum Gundy hasn’t stopped beating for the last few years.

Porter: Let’s downshift a bit and talk about Big 12 Media Days. Did Gundy say anything the surprised you guys at all?

Scott: Not really. It all seemed fairly standard protocol for preseason Gundy, not too high-strung, cracked a few jokes.

Cox: Not really surprising, but was interested with what he said when he basically took responsibility for his teams’s inconsistency last season.

Scott: Yeah that was something he mentioned a bit in the spring, but he really hammered it home in Arlington.

Porter: Yeah, he had mentioned that to Bill Haisten earlier in a one-on-one, too. Both were eyebrow-raising.

Cox: Basically, he admitted that he had gotten lax or comfortable on the smaller details. We don’t want to think it’s that simple, but maybe it is.

Porter: He also seems pretty adamant about playing two QBs, which is … not ideal? Although he’s also had some success with it with Walsh and Rudolph and (sort of) Walsh and Chelf.

Cox: Yeah, I think that’s all noise. He just doesn’t want to name SS yet.

They might play two guys at times, but I can’t believe that he intends to play QB by committee.

Porter: Would be great if it was! But it’s an easy sword to fall on when you don’t recruit to the level you play to and don’t have a QB to wash away those sins.

Porter: Where do you guys fall on the two QB thing?

Cox: I think if you have two, you don’t have one.

That’s excluding any two-QB plays from Sean Gleeson that are meant to throw off the defense.

Scott: I really don’t know what to think any more in terms of the QB race. I think there is a world where one guy wins the job in fall camp, but at this point, I think it’s more likely both play. The two have been competing with each other as backups or as the starter since getting here last year. So if one of them hasn’t stood out from the other now, I’m not sure a few weeks of fall camp will change that.

Porter: I mean, it has worked. Chris Leak and Tim Tebow did it, and Florida won a title. But to me with this crew, you’re putting a ceiling has already been placed on this team if neither has separated himself as the starter. I don’t know if that makes sense out loud like it does in my head.

Cox: I agree with that. Dru is not Tim Tebow either.

I still think that there’s a pretty good chance that he names Sanders as the guy a week into camp. Gundy always harps on divvying up reps, that’s why he named Cornelius the guy at media days last year.

Scott: Competition can be a fickle beast. In a perfect world, the two competing with each other makes both of them better. But there is another world where they both try so hard to no mess up that they aren’t doing what got them to the dance in the first place.

Cox: That’s an interesting point. I never thought of it like that. People always say, “The best one will rise to the top in camp.” But that has not always been true, esp. at OSU.

Cox: So the point of all of this is that we would just add Brandon Weeden to the team.

But I still think career wise Rudy > Weeden. Again not by a lot. Both were great.

Cox: I’d take either to be honest. I might not have felt strongly a year ago.