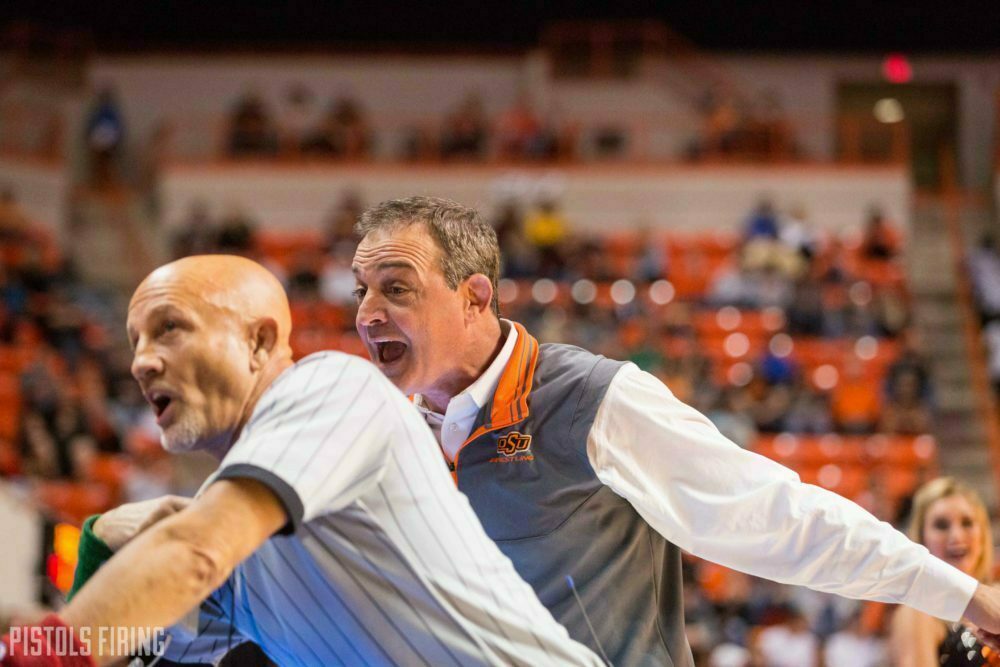 The Cowboys brought Coach Smith his 400th win in dominant fashion winning 9 of 10 matches and only taking one loss in a match Flowrestling has already dubbed the match of the year.

The dual opened up at 141 with two-time NCAA champion Dean Heil taking out 7th-ranked Tommy Thorn with a late TD. In very Heil-like fashion he methodically wrestled his way through the match giving up nothing, then took Thorn down at the last second for a 3-1 win. Heil will without a doubt go down as the best Cowboy of all time to win almost all of his matches by less than 5 points.

Following Heil, No. 12 Geo Martinez picked up a 9-1 major over Minnesota’s backup, then Jonce Blaylock picked up the biggest upset of the night taking out No. 9 Jake Short with a TD in OT.

At 165 No. 5 Chandler Rogers then knocked off No. 8 Nick Wanzek 3-2. Following Rogers at 174, Jacobe Smith dominated Minnesota’s Chris Pfarr and looked as though he’d get a fall after putting him on his back early with a really exciting throw in the 1st. He wasn’t able to pick up the fall, but still won comfortably.

184 ended up being a pretty fun match with both wrestlers pushing a lot of offense and Keegan Moore coming out on top. At 197 Andrew Marsden dominated Steveson with a 12-3 major followed by a 5-2 win for No. 11 Derek White at HWT.

Then came the two marquee matchups of the night.

Unfortunately OSU came out on the wrong end of the first one, but Nick Piccinnini and Ethan Lizak lived up to the hype and then some. The match was incredible. Piccinnini got an early takedown, ride, and turn and it looked as though he was well in control of the match early. Then Lizak took top in the second and turned Piccinnini twice and rode him out getting him back in the match and getting back the riding time advantage.

Lizak was down, 8-1. He's within a point heading into the third. pic.twitter.com/cPyFQ9euXq

Piccinnini then took neutral in the 3rd and ended up giving up a TD and the lead to Lizak. It still wasn’t over yet as Piccinnini got an escape, got back on offense and almost scored a last second takedown that would’ve won the match for him. Really an incredible match.

Kaid Brock closed out the night with a 9-7 decision over Mitch McKee. When the match was still in question he hit this to close it out.

• Cowboys wrestled really well. There’s always work to do, but it’s hard to come away upset at all from that one.

• In my first recap we noted that the Cowboys lost a lot of last-second close matches. That didn’t happen here. Lizak came back and beat Piccinnini, but the context in that match was different than what we saw at the Journeyman.

That was a bit of a back and forth match where OSU just gave up a lead. Most of the late losses at Journeyman OSU just needed to not give anything up late to win, but didn’t. Here there were a lot of similar matches and in all of them OSU closed out nicely. Brock was in a close one and had a nice TD late to close it out. Moore, Blaylock, and Heil all did similar and White/Rogers held onto their close leads also. That was good to see.

• There’s been a interesting pattern recently with guys in their redshirt sophomore year at OSU that were All-Americans as freshman. All of them seem to take a big jump to the next level their sophomore year. It happened with Dieringer, it happened with Heil and I think it’s happening with Brock and Piccinnini.

Both took early losses, but Brock’s last was a fluke. He was up comfortably and made a mental mistake. I really think he has changed levels with his offense that was already off the charts. It’s incredible how slick he is with his shuck/slide by. Guys can’t put their hands on him without him hitting it and scoring. I do worry about his mat wrestling. If he can improve there, he could win a NCAA title this year.

• I know he lost, but I feel the same way with Piccinnini also as far as being at another level this year. His offense is better and his mat wrestling is solid. Today he just ran into an incredible mat wrestler that got the better of him on top.

This isn’t something you coach or would ever probably tell a wrestler to do, but if he just wrestles to get rode out and avoid a turn vs. trying to escape, he probably wouldn’t be turned and he wins tonight. It should be noted that even though he lost today he was majored by that same guy last year, so he’s really closed the gap. Unfortunately his weight this year is actually somewhat tougher than it was last year, but he’s definitely wrestling well even if he took a frustrating loss today.