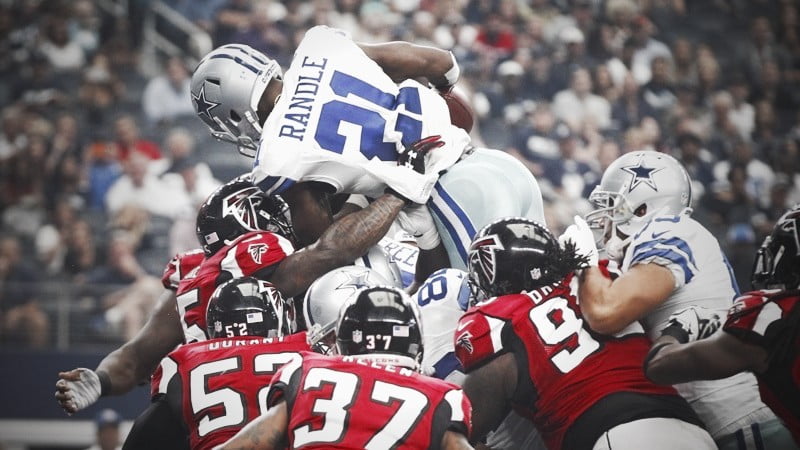 For the first half of Sunday’s game against the Atlanta Falcons, the Dallas Cowboys/All-Oklahoma State 2010s team killed it. Joseph Randle rushed for three touchdowns in the first half and fulfilled (or crushed) the dreams of fantasy football players everywhere.

No Romo?
No Dez?
No problem.
Joseph Randle with the moves on a RIDICULOUS 37-yard TD run. #ATLvsDAL http://t.co/Ryj6whMLnE

SportsCenter’s Twitter page can usually be counted on for interesting stats, and on Randle, they didn’t disappoint.

He has 3 today… in the first half. pic.twitter.com/iyncyMKAR6

His three first-half TD’s matched his total from last season. Unfortunately, they wouldn’t be enough as the Cowboys would end up losing to Atlanta, 39-28.

Brandon Weeden made his first start of the season following last week’s injury to Tony Romo. Though it came in a loss, Weeden’s performance was overall not too shabby.

Good luck @bweeden3. The #okstate family is pulling for you. @dallascowboys

Even though Weeden passed for 232 yards, he didn’t throw any touchdowns and had one interception. He did, however, break a franchise record and came close to breaking an NFL record.

But, the loss meant Weeden has dropped nine straight as a starter, and his overall starting record fell to 5-17.

The other Pokes-turned-Pokes had solid days. Dan Bailey didn’t get a chance to attempt a field goal, but he didn’t screw up any of the PATs, either, going a perfect 4-for-4.

Tyler Patmon had a tackle and a pass defended.

The Tennessee Titan’s Perrish Cox was the only other former OSU player to do anything of note this week.

He picked off Andrew Luck, and nearly had a pick-six, returning the ball all the way to the 3-yard line. Luck and the Colts have had a rather disappointing season so far, and Cox’s Titans were almost able to pull out the win, but fell just short, 35-33.

As soon as Orie Lemon’s career started in Tampa Bay, it was over.

But then it started all over again. After signing him the week prior, the Buccaneers cut Lemon last Monday, then re-signed him on Tuesday. Lemon served on the practice squad for Tampa Bay this week.

Bucs have signed LB Orie Lemon, released Monday, to practice squad, and re-signed guard Martin Wallace, who had been on p-squad in Week 1.

As for the rest of the former Cowboys, here’s a quick roll-up: