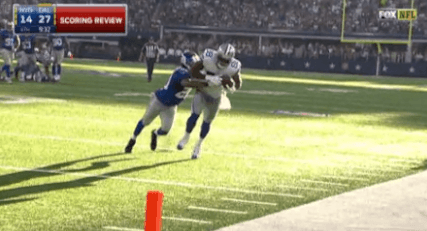 Another week and another win for the Cowboys. Dallas, that is, not Oklahoma State. Here’s a roundup of everything notable for OSU alumni from Week 7 in the NFL.

If there’s anything to take away from watching the former Oklahoma State Cowboys play in week 7 of NFL action, it’s that Dez Bryant is a beast.

Bryant manhandled the New York Giants defense on his way to nine receptions for 151 yards on Sunday.  It’s hard to pick just one moment from Bryant’s performance, so here’s a bunch of them.

Bryant did most of his damage in the second half, meaning that he is not only beast, he’s a clutch beast.  His efforts helped secure the game for the Cowboys, as they improved their record to 6-1.

He was 7-7 targeting Dez Bryant in the 2nd half

Bryant credits his huge second half to the addition of a visor to his helmet and a change of cleats.

“Truthfully, it makes me feel a certain way,” Bryant said. “I feel like I have to go back to being me, wear the things I normally wear and don’t try to do anything different.”

In other news, Dan Bailey is still money. The kicker connected on a 49-yard field goal late in the 4th on Sunday to put the Cowboys up 31-21, which would end up being the final score.

Joseph Randle was everywhere on this week—in the backfield, as a receiver, on special teams, at the shopping mall.

Cox spent time covering Demaryius Thomas, who ended up with 8 receptions for 171 yards and two touchdowns.  Cox finished the day with two tackles.

Justin Gilbert had arguably his best game of the year, albeit against Blake Bortles.  Gilbert finished the day with two tackles, a pass defended, and a QB hit.

The hit came when Gilbert was coming off of a blitz and delivered a crushing blow to Bortles.

Browns needed rookie CB Justin Gilbert to have a strong game today. He's shown up big so far — leveling Bortles on a blitz from the edge

Pettigrew more involved in the offense

Brandon Pettigrew stepped into more of a receiving role this week, with TE Eric Ebron ailing.  Pettigrew suffered an ankle injury during the game, but persevered through the pain.  At the end of the day, he had four receptions for 28 yards.

Most Lions fans won't admit it, but Brandon Pettigrew was a big part of why the Lions won. Didn't screw up, stayed solid, kept moving.