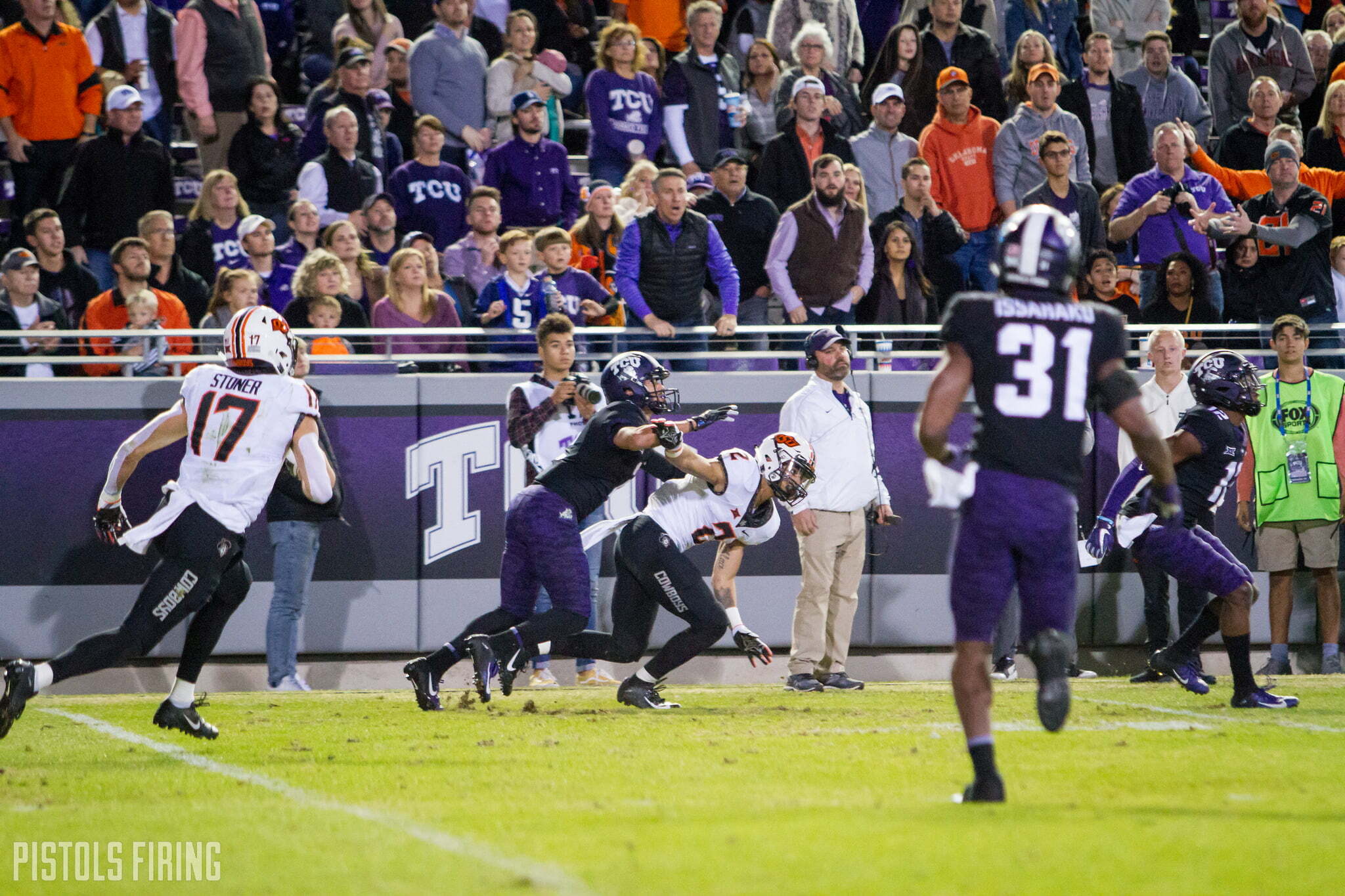 TCU beat California 10-7 in the Cheez It Bowl earlier this week. You know, the same TCU that somehow took down an OSU team coming off probably its best two-game stretch of the season with a win over WVU and near win in Bedlam.

TCU’s quarterback, Grayson Muehlstein, finished the game … I can’t believe this is is a real line … 7-for-20 for 27 yards and 4 INT. Again, this is a team that Oklahoma State lost to as a favorite with a winning season on the line.

This is an impossible stat line. I’m in awe pic.twitter.com/xXGdQIzADq

The Pokes are aware of it, too. As they prep for Missouri and a potential top 10 draft pick at QB in Drew Lock — basically the exact opposite of the Mule Man! — they’ll use that L in Ft. Worth as a little extra motivation.

“I think the last game of the season really left a sour taste in our mouths,” said wideout Dillon Stoner. “A lot of things didn’t go our way. We didn’t execute the way we should’ve, so there’s been a lot of motivation to get it going again.”

“I think we’re very confident,” said Corn of going out as an eight-point underdog to Mizzou. “Our last game wasn’t what we wanted, but weeks prior we were clicking on all cylinders and we had things rolling for sure.”

They did, which only led to more confusion about this season. I hit up Doug D. of CFB Reference earlier for an assist on trying to contextualize whatever it was we just watched from OSU this year. Here’s what he said.

The only other team besides OSU with three (wins over top 20 teams) and five (losses against unranked teams) is the 1954 LSU Tigers.

OSU’s sister school this year is Purdue, which has three wins against ranked teams and SIX losses against unranked teams, although not all of Purdue’s Ws were over top 20 teams. Just top 25.

So to summarize, three teams in CFB history with three wins against ranked teams and five or more losses against unranked teams: 2018 OSU, 2018 Purdue, and 1954 LSU.

Missouri isn’t a top 20 team, but at No. 24 they would fit the template pretty nicely. How great would that be if OSU goes 4-1 as an underdog against top 25 teams and 3-5 against everybody outside the top 25?

“You’ve got to treat everyone the same, no matter if they’re the No. 1 ranked team or I’m not sure what Missouri is, but I know they’re a great team,” added Stoner. “We’re unranked, so there’s a little chip on our shoulder there, but we’re going to be ready to play.”

And while bowl victories probably don’t mean much in terms of continuity into a new season, they do mean a lot when it comes to the way we both talk about and view programs. For all the consternation surrounding these Pokes for the last few months, they could use something savory to take into 2019.

“It’s very exciting just to have the chance to make it to a bowl game,” said Tylan Wallace. “In fact, even more exciting to have a chance to win it. I think being able to win the bowl game would be a good opportunity to send us on to next year and send us on a good note going into next year.”

“A bowl win would be great — send the seniors out on a win,” added Johnny Wilson. “I know a bunch of these guys have worked hard, been here 4-5 years, so I think just sending them out on top would be awesome.”