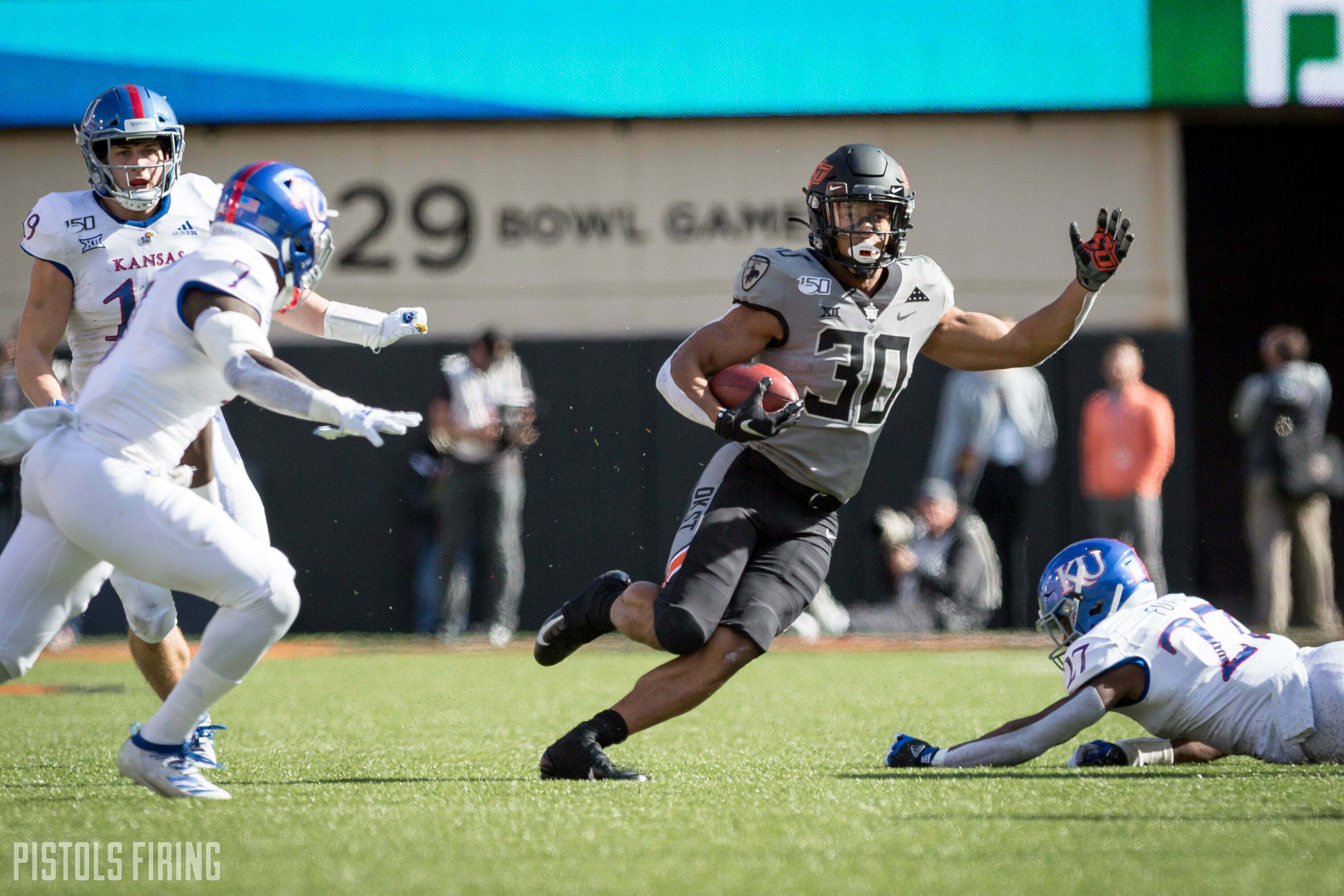 I emptied my 10 thoughts over here, but wanted to get the rest of my notebook out there before Baylor-OU takes over the universe on this Saturday night. Let’s dive into my notebook in chronological order.

• I cannot believe the uniforms. I thought they would be really good, but my first impression is that they’re among the best ever worn by OSU. The pants should be full-time. Holy Nike! 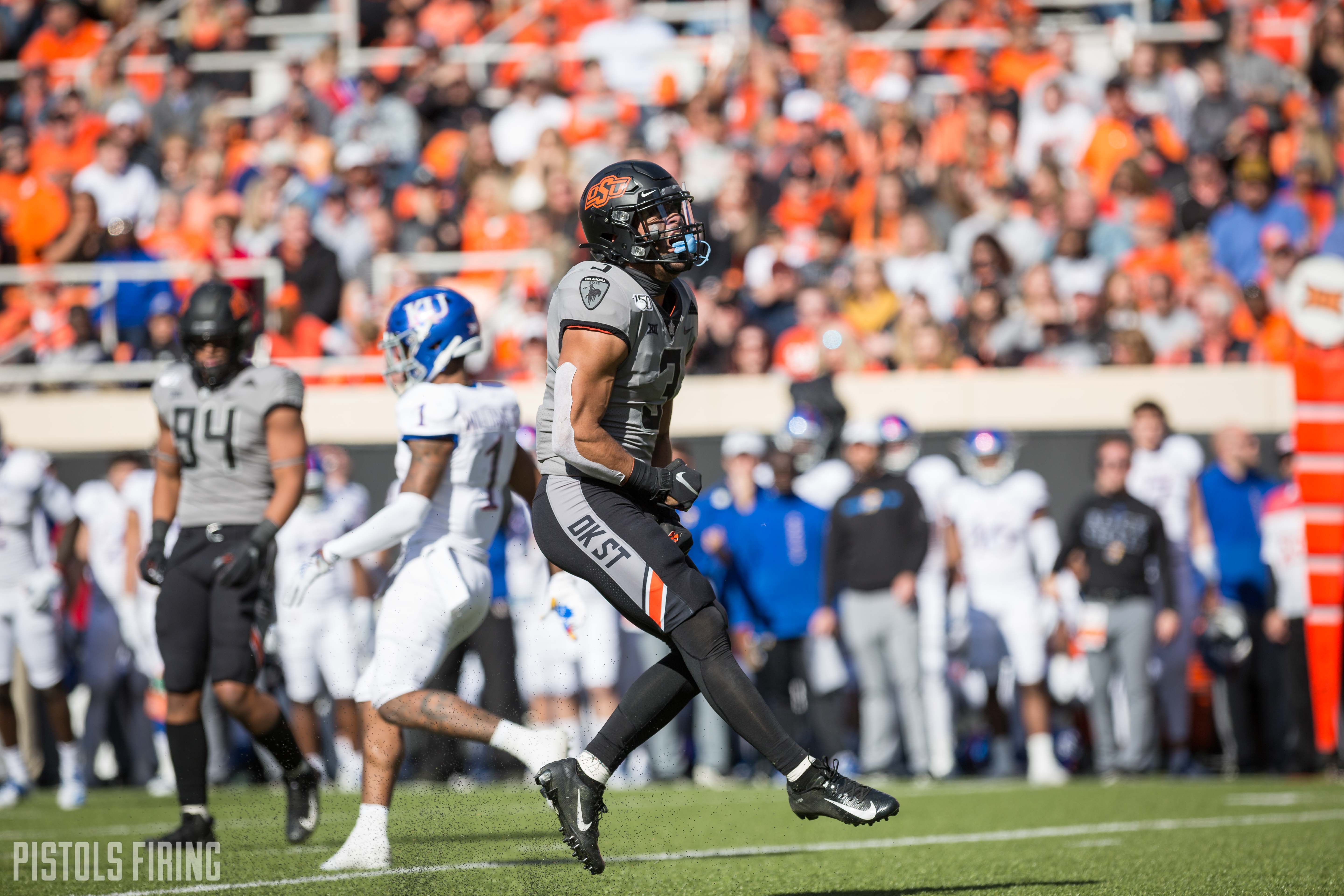 • Part of me wonders if Gundy coached this long just to see a day where he could wear his hunting gear on the sideline.

• I need dump-off passes to Chuba like I need air to breathe. I jump out of my seat every time it happens.

• Four-hundred twenty-seven thousand dollars per month. Only in #Merica! 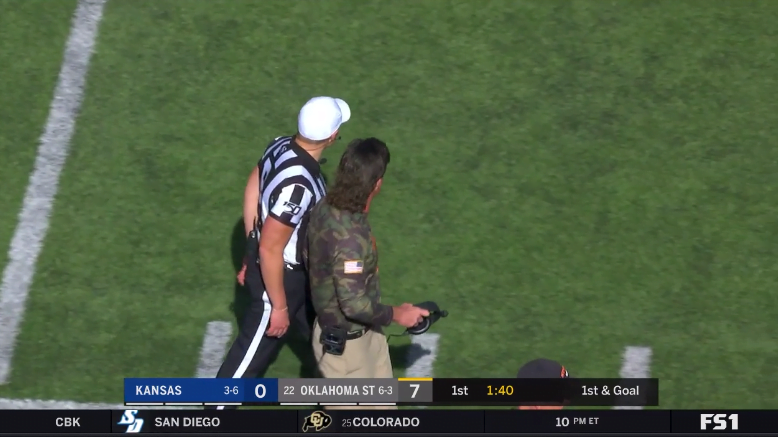 • At one point, the announcing team said “we know you’re going to get sick of us talking about Chuba.” I don’t know who “you guys” is, but I am not among the guys.

• Marshall was at the game and said a Cade Cunningham promotional video was played on the video board. This pleases me. 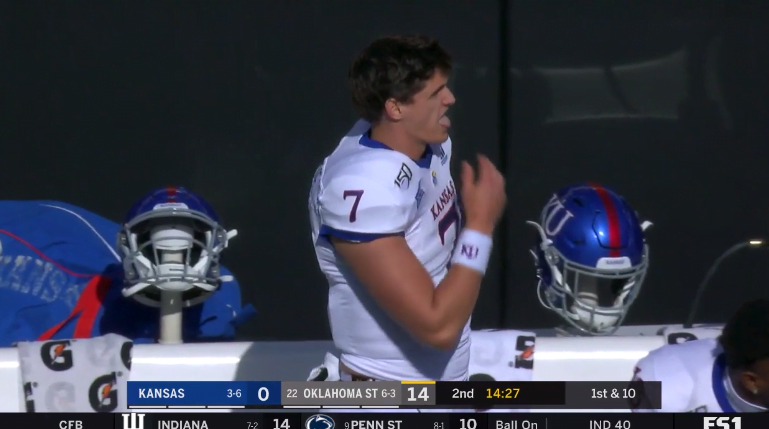 • How terrifying do you think it is to have Jelani chugging right at you in the open field? I would feign a kneecap dislocation and writhe on the turf until he galloped past me.

• Stoner throwing off his back foot on the run: 👎

• Matt Ammendola missing FGs against Kansas doesn’t do much for me. Would rather him get the misses out in the games you’re going to win anyway. His shot at the single-season FG percentage record took an arrow in the heart.

• Love that Kasey Dunn was rocking this. Total power move. 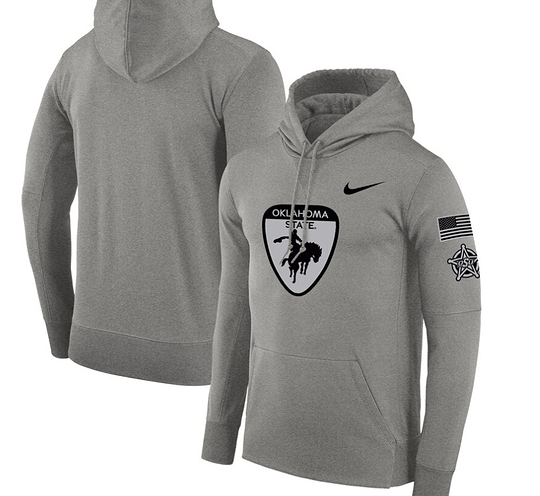 • Unreal line from Kyle Cox today after OSU tried to run it up the middle 229 times in a row in the second quarter: Going with Army playbook for Veteran’s Day. 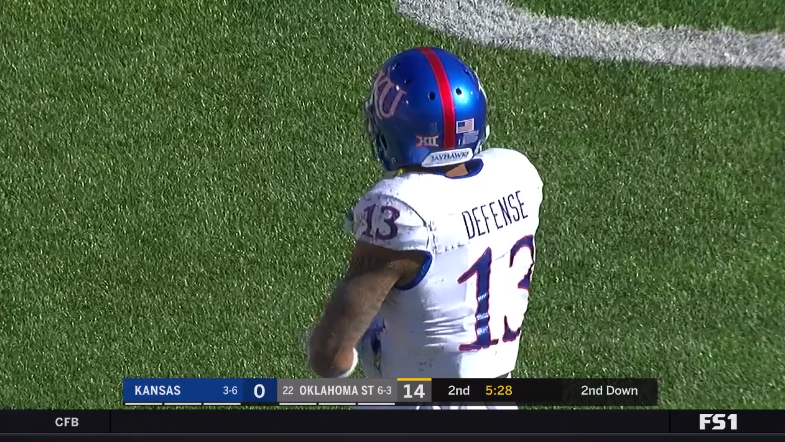 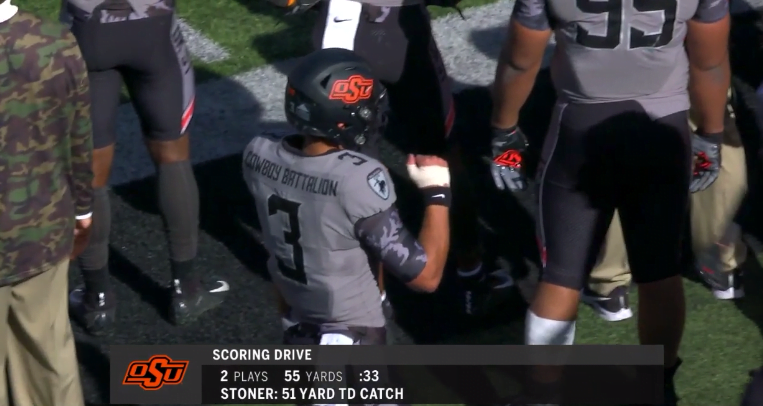 • Announcers: These officials, I don’t know what kind of workout plan they’re on but they’re getting bigger and bigger every year. Yes.

• Gundy said he used to comp Thurman and Chuba? That seems … not right.

• Did anyone else see that Gavin Potter commitment video thing? What in the world? You go K-State hoodie –> Texas Tech shirt –> Kansas painted chest?? I mean, if you’re committing to Kansas, I’m not sure 1. You need to have a commitment video and 2. You should be rolling over other schools like that. Like, did KSU have a wake after not getting the No. 1,360 player in the country?

Anyone wanna guess what Gavin Potter was trying to accomplish here?? 🧐🧐🧐 pic.twitter.com/xVMpsg7mUG

• This is absolute magic. Houdini Hubbard.

• I thought this was great. 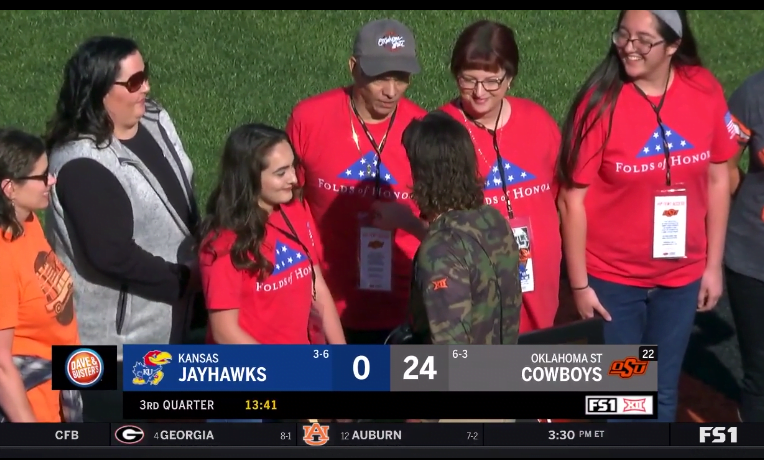 • Sanders somehow sort of overthrew Braydon Johnson. I didn’t know that was possible. He also got some new tape on his right thumb. Went from white to black tape from first to second half. I don’t know why I care about this.

• This comment from our PFB+ game thread was on point and the only bad thing I think you could say about the threads: I like the uniforms, but I sure wish their names were on them. It’s hard to remember all the numbers #old.

• So … it turns out that Dru Brown throws a pretty good deep ball. Best part about this TD? Stoner running into the locker room out of the end zone.

KU with the rare 3 interceptions by 3 different QBs in 1 game.

• I think maybe my favorite thing is the “we’re down by 30 in the fourth quarter, but I’m still committed to the bit so here we go” first-down dance/arm point in games like this. KU executed a perfect one when Rodarius came down with that ball at the end of the game.

• DB has a Barry Bonds-style cross earring, which is hilarious and great. 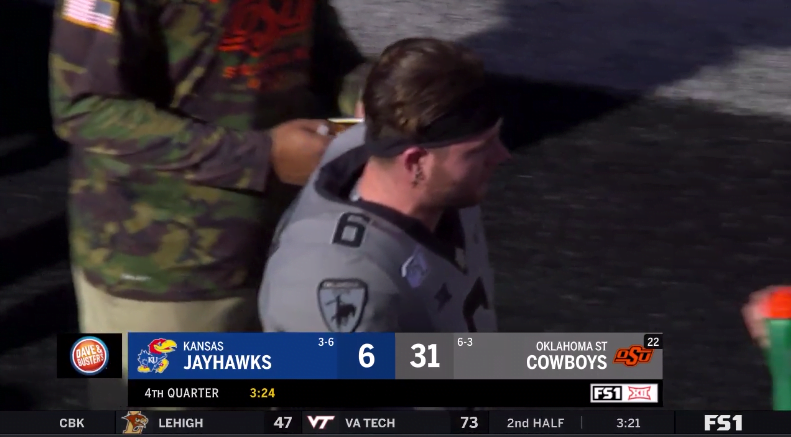 • It’s always 😬 to me when the Big 12 commercial says “uncompromising values” as they show Baylor’s cheerleaders on the screen. Like, you couldn’t have gone another school there?

• This was just the 10th game of the Gundy era that OSU has had two or fewer penalties.

• Not sure Pooka wants to deal with this.

• Just saw on the ticker that Scott Frost got a contract extension. Gundy’s going to go ask for his salary to be doubled after he goes out and posts another nine-win season.

• I love palindromes. Not sure of a way to do this that wouldn’t take 29 hours, but I’m curious about how many palindrome scores OSU has had in the Gundy era.

• Fun one from OSU’s media relations here: Chuba Hubbard posted his seventh game with 100 rushing yards and two touchdowns, the second-most in a season in Big 12 history. Texas’ Ricky Williams had eight such games in 1997.