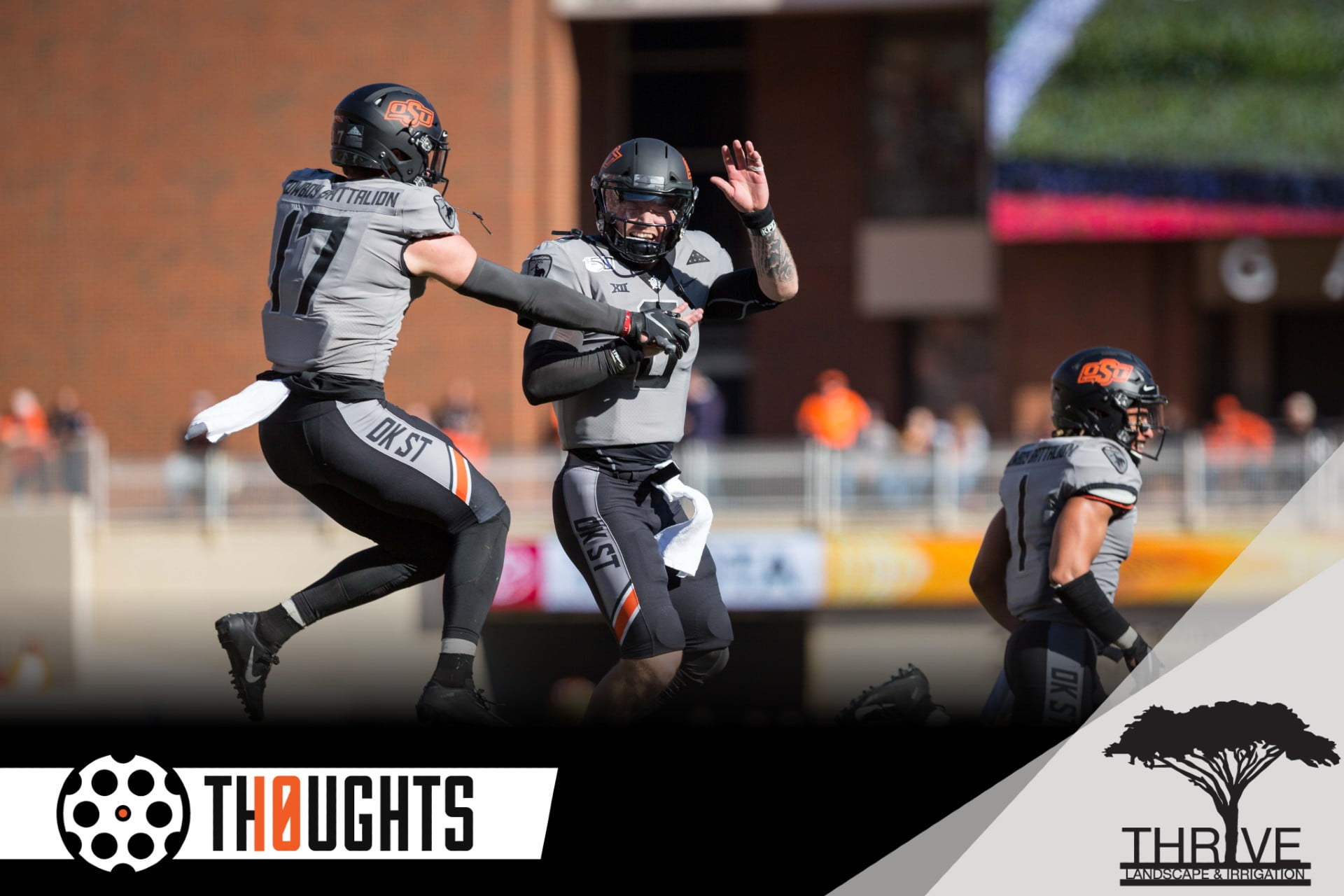 Oklahoma State beaked the Jayhawks 31-13 in Stillwater on Saturday to get their seventh win of the year and (somehow) lock up a 14th consecutive winning season under Mike Gundy.

The game itself was a bit of a mess at times as six different players attempted a pass and the Pokes got outscored in a second half that saw QB1 go out with a hand injury.

Before he left, Spencer Sanders completed 12 of his 18 passes for 168 yards and a touchdown. He also rushed for 37 yards on 11 carries. The best back in the country — Chuba Hubbard — touched it 25 times for 164 total yards and a pair of touchdowns. He’s now fifth all-time in rushing yards in a single season in OSU history.

Dillon Stoner set a career-high with 150 receiving yards and two touchdowns, the latter a gem from QB2, Dru Brown (more on that below).

But again, the story of this day as it has been for the last month, was Oklahoma State’s defense. Kansas failed to reach the 300-yard mark, just the 12th time in the Gundy era an opposing Big 12 team was held under 300, and OSU won the turnover battle 3-0 with Kolby Harvell-Peel in full editing mode on his All-Big 12 resume.

More on all of that as we delve into the 10 thoughts, but first a big shout to our sponsor for this season, Thrive Landscape and Irrigation in Stillwater. Not sure if their grass is Les Miles-approved, but they’re great, have terrific customer service and you should call them for your landscaping needs!

1. Is this what it’s like to trust a defense?

I know I’m going to regret saying this, but I … mostly trust Oklahoma State’s defense right now. I get that they’re going to give up home runs to teams like OU and Texas, but three weeks is a trend, and it’s not as if Iowa State, TCU and Kansas are total bottom-feeders on offense (although Kansas might end up there). You hold those three combined to 67 points on 43 drives, and that’s more or less like throwing three straight shutouts in the Big 12.

Points per drive in the last three conference games …

That’s a staggering differential, and it’s perhaps a signal that there are signs of life for Knowles in the Big 12. I get leery about crowning defenses in this conference (see: Oklahoma, University of), but at the very least, you’re going into games thinking that your defense could at least play a role in winning that doesn’t include turning teams over 5+ times.

It took three games — and I would be concerned even if OSU had the Steel Curtain going into Bedlam — but I think I’ve arrived with confidence in an OSU defense that [looks up and down roster] doesn’t lose much going into 2020.

Oh, here are those sub-300-yard games in the Gundy era coming into today’s. 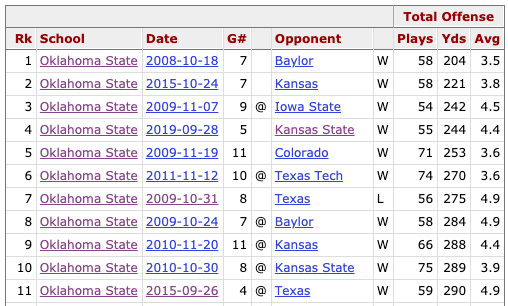 We won’t spend a ton of time here because you all know what you’re watching with him, but two runs stood out as he notched the easiest 122 in the history of this sport and outgained KU by his lonesome at halftime 100-96.

The first was his first TD. Look at it in photos first.

Chuba takes the handoff near the right hash and heads to the left side of the field. 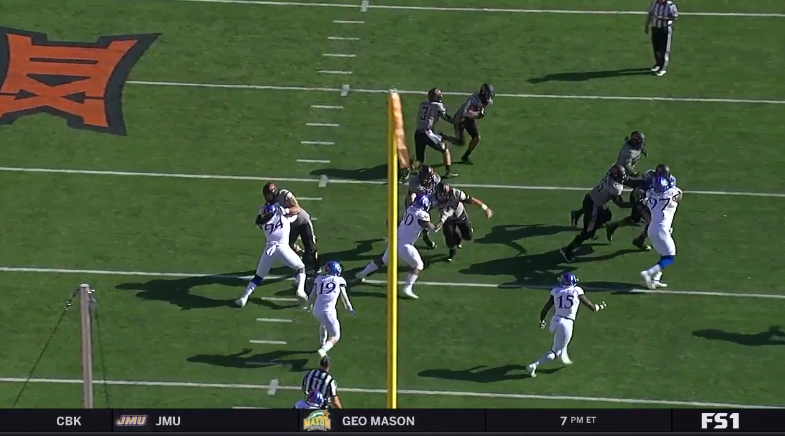 He gets almost all the way over to the left hash before cutting it back to the center of the field. 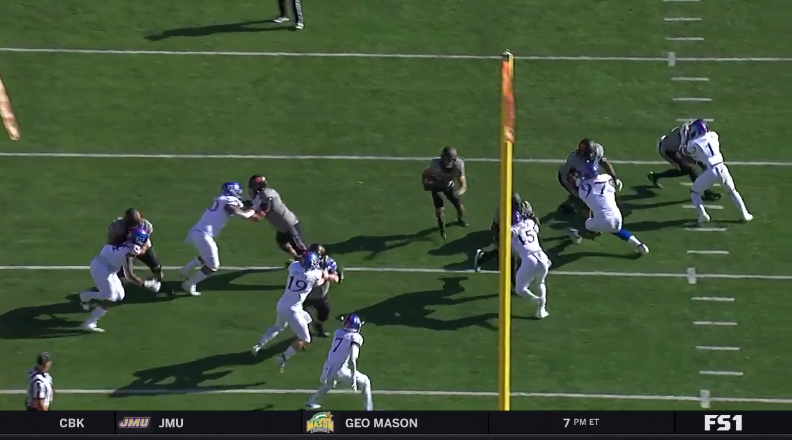 Then he crosses the center hash back toward the right side. 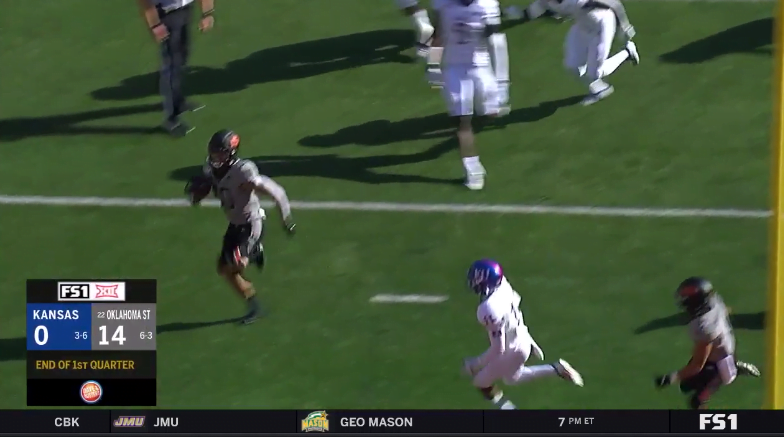 He’s never touched, not once. Magic.

The second was this one at the end of the first that made me laugh out loud. It looked a bit as if half of OSU’s organization just wanted him to sit down and run the clock, but he somehow did a spin move that would have sent somebody flying out of a phone booth and romped for another first down. He’s so special.

Also, the way OSU used him in the passing game was on point. I kept screaming noooooooooooooo every time Sanders and Dru Brown dumped it to him because all I saw were yards rolling by that could have gone toward his season rushing total, but there’s nothing scarier for a defensive coordinator playing OSU than Sanders loading up for something deep and flipping it to 30 with nothing but space and nothing to do but make people miss in the open field. 💀

Chuba is actually averaging 6.66 yards a pop right now, so I had to cut those down to two digits and round up. The wildest part is that he’s now on this list with fewer than 260 carries on the season. It’s not unreasonable to think he’s going to pass everyone but Barry with fewer than 300 touches. Surreal.

4. Sanders Can Be Intoxicating

When you pair somebody who slithers like Sanders slithers against opposing defenses with an arm like this, you can understand where the breathlessness comes from. Marrying that arm with that speed is a rarity in college football, and developing it in the right way can mean the difference between 7-5 and playing for a future Big 12 title.

Two things that are more interesting to me than this throw, though.

2. Mason Rudolph through 10 college football games: 11 picks. Spencer Sanders through 10 college football games: 11 picks. He has just two in OSU’s last three wins, and that’s a big reason why they’ve won three in a row. I’m not saying he’s going to be Mason Rudolph — his skills are obviously wildly different — but all the hollering and hand-wringing from the first six weeks was probably a little overstated.

More pertinent is the fact that OSU has suddenly flipped the script on what was heading toward one of the worst turnover-margin teams in Big 12 history (a real stat!) and is now on the positive side in this category.

After today’s game, OSU has turned teams over 15 times in Big 12 games and given it up 14 times. With OU checking in last in that category (-7 overall!) and OSU on an upward trend toward conference leaders, these last weeks are going to be 👀👀👀.

I don’t think we need to make this into a lot more than it is, but it also wasn’t nothing. Here are five truths about the (actual) Dru Brown debut.

For the sake of the #content, I’m rooting for absolute anarchy over the final two weeks that ends in Brown throwing for 220 yards in the fourth quarter of Bedlam, intercepting Jalen Hurts’ desperation hail mary and being carried off the field by Rob Glass as OSU hits that back door into the Big 12 title game against Baylor.

Probable? Guessing no! But I was happy that DB got some real run in a conference outing and even more pleased that OSU is confirmed deep at the most important position on the field.

I think when we think about guys like Brown, we often only relate to how it affects teams like OSU. But for him to give up what he had to come to Stillwater, USA and sit for two straight years — while maybe unexpected — has to have been disappointing. It was awesome to seem him slinging it and having real moments with a team that’s clearly galvanized by both guys.

Listen, was it good? No. Was anything about it encouraging? Also no. Did one of those deep ones sneak inside the post Quinn Sharp-style? I think maybe yes!

Here’s where I land: All the evidence we have is that he’s a really good kicker who has really bad games. Of his 16 college kicks missed, nine of them happened in four games. He’s 49/57 in the other 29 games.

I don’t feel mega concerned, and I’m actually glad that his outlier game (hopefully?) this season came when it could not have mattered any less and not in, say, two weeks from now when Lincoln is trying to ice him at 48-48 late in the fourth.

This week was so much fun.

There’s Les, rocking his Raising Cane’s headset, chewing on his nails (not much real grass here in the Big 12), unintentionally blinding folks in the space station with his LSU title ring, trying to figure out how in the world OSU’s defense got like this and how the offensive coordinator whose microphone he used to cut at the end of games and now wears a mullet and a camo shirt to coach in could possibly have strung together 14 winning seasons in a row starring players from multiple countries on both sides of the ball.

I wouldn’t hire Les to run this website, much less my football team, but as a content producer, I am quite pleased by his return. 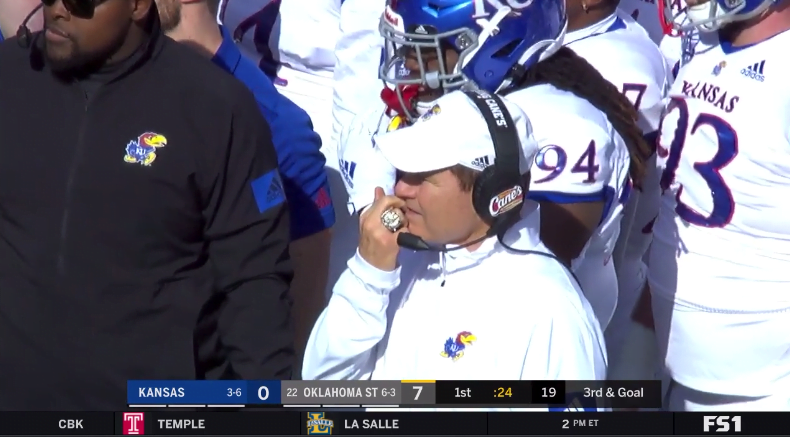 Aside: The deep dive into A History of Les Miles’ Hair Color and Style is the darkest hole. There should be a 30 for 30 on Kansas head coaches’ hair.

Nobody puts their body through more than Stoner does on Saturdays. He takes hits all over the yard — into walls, into DBs, through tunnels — and just keeps coming. Stunningly, despite this being his 17th year as a Cowboy, this was just his fourth 100-yard game, and his 150 yards were a career-high, usurping the 127 he put on WVU last year.

Even more stunningly, Stoner has now produced back-to-back top-five games for him. He put up 93 on TCU last week, and these two games represent two of the only five in which he’s surpassed 76 receiving yards (this seems impossible, I know, but it’s not).

He’s been a worthy replacement for Tylan — inasmuch as you can replace Tylan — at a time when OSU badly needed it. I wasn’t sure he had the goods to do what he’s done in back-to-back weeks so a hat tip and a roll of KT tape to No. 17.

OU-Baylor tonight in Waco, and it has monstrous OSU implications. Here’s the short version of the lol-worthy scenario that could get OSU to Arlington for the most improbable shot at a conference championship in their history.

1. Baylor beats OU
2. OSU wins out
3. Iowa State beats Texas (they lead at the half)
4. Iowa State wins out

Baylor wins the league. Either OU-OSU-Iowa State or OU-OSU-Iowa State-Texas tied for second. In either scenario, OSU would (improbably!) hold the tiebreaker, as long as they win out. But OU has to get to three losses somehow for this to even be in play. Their other game is TCU in Norman next Saturday (no) so Baylor getting to 10-0 — while possibly infuriating for some — is a necessity if you want to (like me) believe in the impossible.