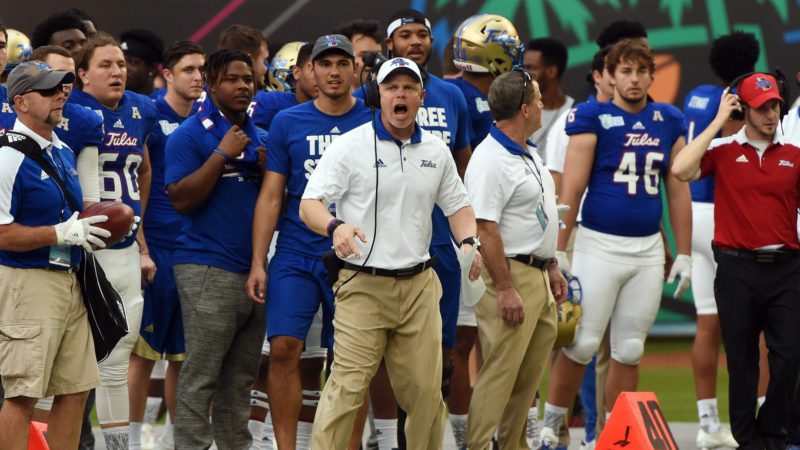 Oklahoma State looks primed for an exciting — possibly historic — season with all kinds of talent returning on both sides of the ball. To start off, they’ll face one of the more competitive non-conference schedules they have in recent history, starting with in-state foe Tulsa.

Last Meeting: In 2011, Oklahoma State took care of the Golden Hurricane 59-33 in a game that went well into the next morning thanks to some extended weather delays.

Oklahoma State is 39-27-5 against the Golden Hurricane all time but has won five straight dating back to 1999 and 15 of the last 20 meetings between their other in-state rival.

The Golden Hurricane is coming off of its own 10-win season, which culminated with in their 55-10 shellacking of you know who. That certain team who was a awarded a certain victory in Stillwater last year that a certain coach would like to ignore.

But the 10-win mark is about as far as the similarities go between these two teams. Oklahoma State returns their ace QB and possibly the most talented receiving corps in college football. Tulsa will be without their three-year starting signal caller and two 1,000-yard wide receivers from last year.

We know Philip Montgomery can coach offense. The question is whether or not he has a quarterback that can run his high-powered style. Dane Evans departed as the school’s all-time passing leader. In his wake there appears to be a two-man QB competition that has not been decided.

Junior Chad President got most of the first-team reps in the spring but it was Luke Skipper that had the statement spring game. The redshirt freshman went 16 of 24 for 173 yards and two scores. Montgomery said he’ll hold off on naming his starter until this fall.

On defense, Tulsa lost three of its top five tacklers and some serious strength in run defense. They’ll have to replace Trent Martin who led the way with 100 total tackles, 6.5 tackles for loss and a sack. The middle linebacker was a force in passing game too with five pass breakups and two interceptions last season.

The cupboard isn’t quite bare on the back end, though. Strong safety Jeremy Brady has exhausted his eligibility but the Hurricane returns some depth in secondary headlined by Kerwin Thomas who contributed for nine pass breakups and an INT, as well as free safety Jordan Mitchell who had nine of his own breakups.

Tulsa, though reloading, will be a good test for Oklahoma State to start the year. Will Mike Gundy and Co. try to play down to the competition and go run-heavy based on the projected strength of Tulsa, or will they try to run over the Golden Hurricane? The Cowboys have had issues with starting slow especially early in the season and against lesser competition.

They have too much to lose heading into Rudolph’s last season than to repeat those type of mistakes. We’ll learn more about Oklahoma State than Tulsa in this one. Are the Cowboys ready to take the next step? Blowing the doors off of a rebuilding (reloading?) Tulsa team would be a huge step in the right direction.

Oklahoma State’s strength is undoubtedly their passing attack. Can the Cowboys get down the field early and often against the strength of Tulsa’s defense — its secondary. They don’t force a ton of turnovers but they’re experienced. And they’re Tulsa’s only shot at slowing down the Cowboys.

Oklahoma State should win handily. I’d say in the 38-24 range.