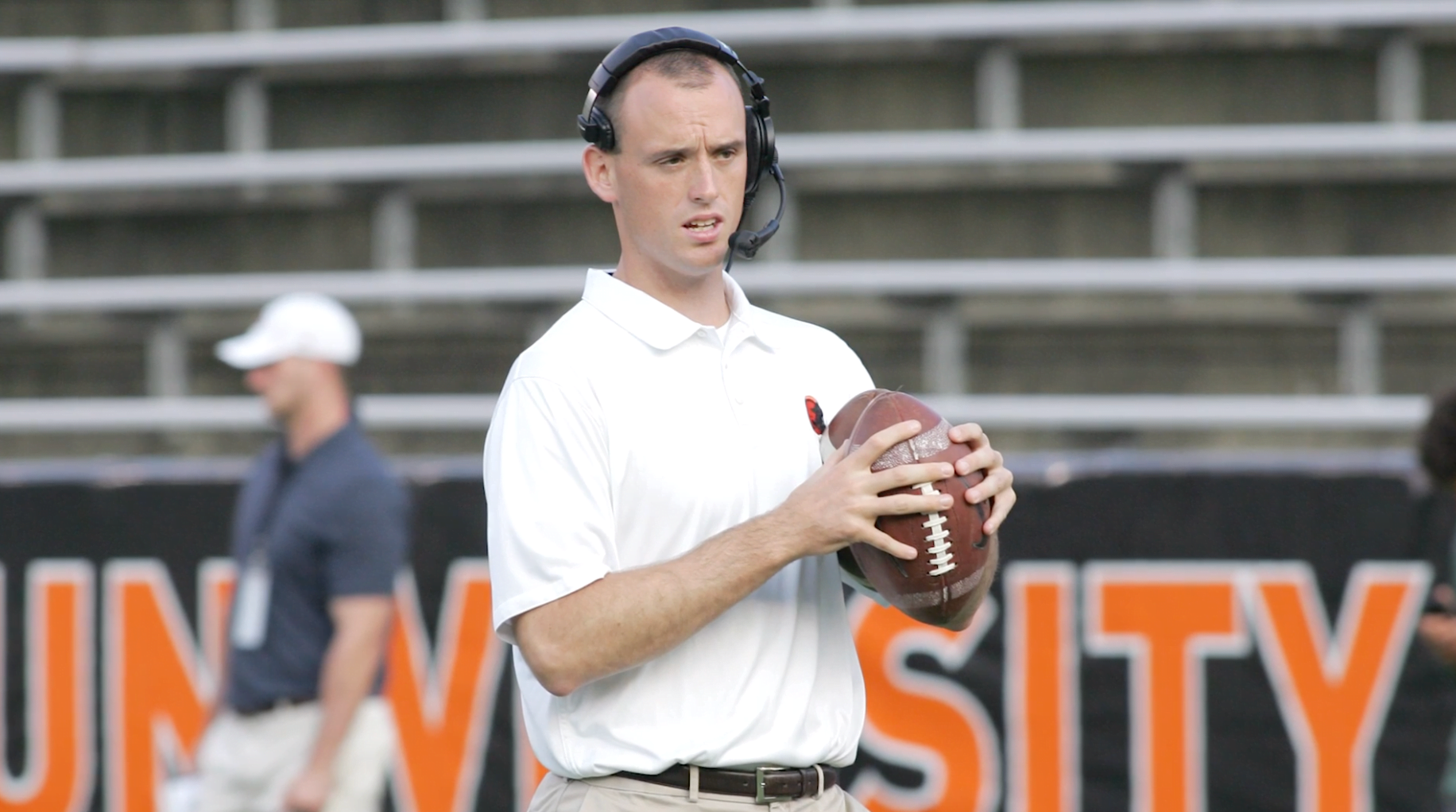 Who is Sean Gleeson?

The answer to that question could take months or years to unwind, and, if the previous run from Mike Yurcich is any indication, it could look innumerable ways at various times throughout his tenure.

We know he likes to pass and to run. We know he can ‘croot! We know he used to be a bowling (!) coach (which is definitely his version of “Mike Yurcich plays with LEGOs”). But there’s not a ton of other info out there on him.

The most comprehensive thing I could find on him is probably this video, produced by Princeton, which gives a few tidbits. I jotted some of his background down as well as some video notes after watching this like the Zapruder Film for clues and nuggets.

Gleeson got into college coaching by essentially volunteering his time at Princeton while coaching football (and bowling) at a place called Delbarton — a private New Jersey prep school which your kids can attend for $39,000 per year.

One of Gleeson’s old coaches from when he played QB at Williams college — a guy named James Perry — was the OC at Princeton at the time and invited him in to help and observe. Princeton head coach at the time (and now), Bob Surace, took note and recommended him to his brother, Brian, who was (and is) the head coach at Fairleigh Dickinson.

After two years at Fairleigh Dickinson as the OC, Gleeson came back to Princeton to coach running backs and special teams (!) from 2013-16 before taking the offensive coordinator reins in January 2017 from his old coach Perry, who had moved on to coach Bryant and is now the head coach at Brown.

• Gleeson comes off a little (football) nerdy, a lot passionate and definitely a well-respected leader at a small but good school in the northeast. So … Yurcich 2.0?

• His time helping out at Princeton while at Delbarton was pretty interesting. He said he hung around because of his old coach, Perry, and because, “I had the bug to get into college coaching like I always did.”

• Here’s what the Princeton head coach, Surace, said about Gleeson helping out while at a private high school: “Some guys you say, ‘Hey why don’t you come back? You have an open invitation.’ And they show up once and you don’t see them again for two years. Sean was there for three or four days a week.”

• More from Surace: “There’s this genuine ‘He wants to be great.'” Gundy must have just been losing his mind over some of these quotes. He may not have even conducted an interview. He may have only watched this video.

• Here’s what Surace told his brother, Brian, at Fairleigh Dickinson: “You have to interview this guy Sean Gleeson. I’m telling you this guy is going to be a star. This guy gets it in every way.”

• More from Surace on Gleeson’s time as special teams coordinator: “Those positions are leadership roles. You’re in front of the entire team. You have to strategize. You have to think quickly. You have to make decisions. You have to know personnel. Sean did an outstanding job. His energy, his passion, his intelligence — every step of the way. I think it showed on the field, how well our special teams units played … with some youth.”

• Lastly from Surace: “He’s one of those guys … football consumes him. (He loves) football. The things … the qualities you’re looking for in a coach, (he has) those same qualities.”

Gundy after seeing that ⤵️ 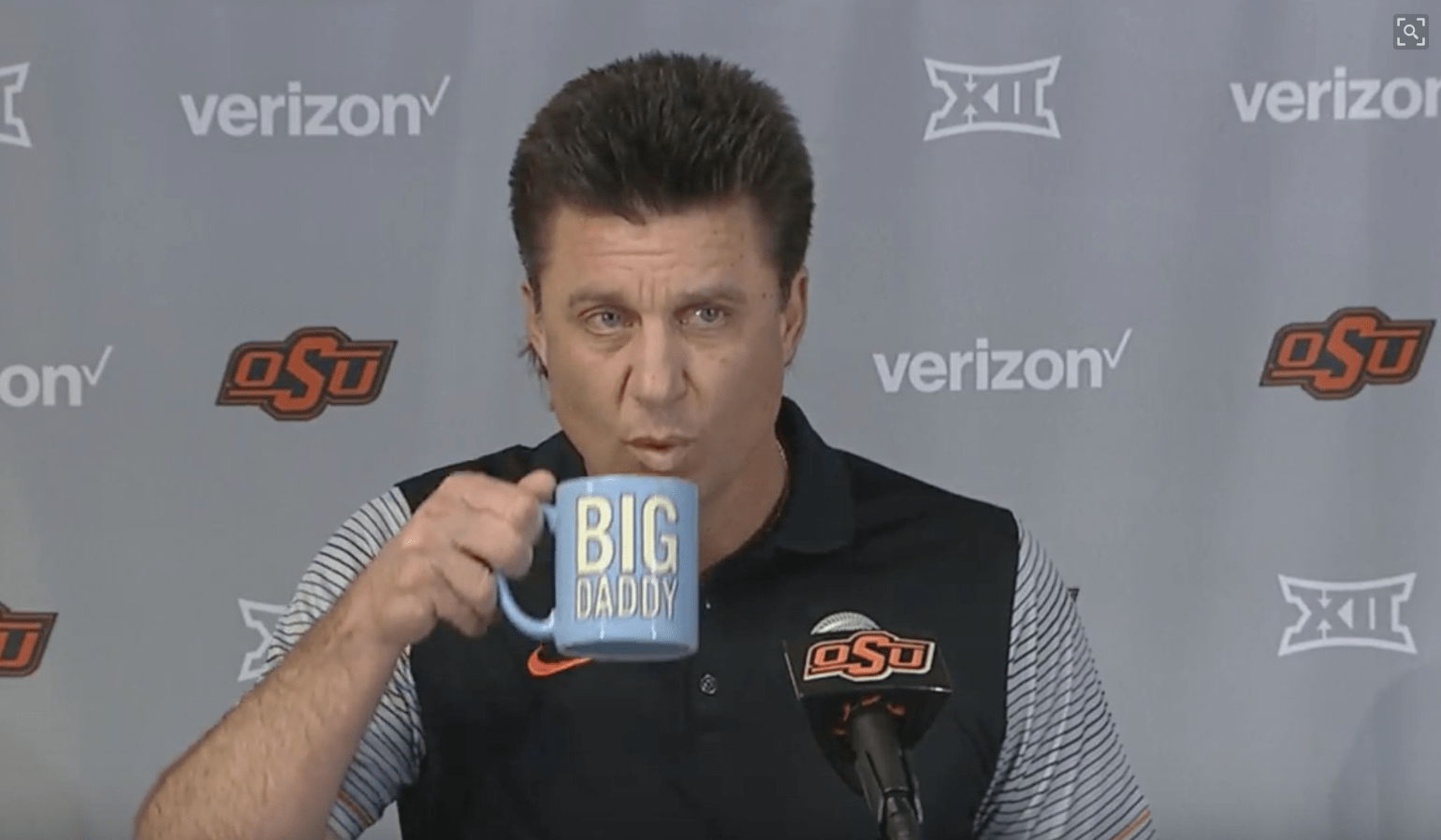 There’s more, though (I got in so deep I’m almost ashamed to admit how many of Gleeson’s old tweets I read)! Maybe my favorite thing I saw was this one after his QB, John Lovett, won one of the many awards he took home last December.

No photoshop.
No hashtags.
Just trophies.

No photoshop. No hashtags. Just trophies. Congrats to the Lovett family on raising an incredible son. pic.twitter.com/n44KOSxaK6

Lastly, here are a few quotes and stories I found intriguing. Gleeson was asked about his squad (which would go on to post an undefeated 10-0 record).

“I feel good about our development,” Gleeson said about the O-line. “I’m confident. I feel really good. We’re settling for nothing but the best.”

Coach speak? Sure, but I like that quote: We’re settling for nothing but the best.

More coach speak here, and not dissimilar from something you would have heard from Corndog or Mason Rudolph on Yurcich.

“Coach (Sean) Gleeson does an incredible job instilling confidence in our offense and in our guys. He believes in us 100 percent and we believe in each other,” Lovett said.

This one is on the four-star QB who chose Princeton over Bama. It’s not super Gleeson-centric, but I do think it shows that he can recruit a little bit. You aren’t pulling somebody out of the jaws of Tuscaloosa unless you’re at least a little bit compelling as a human being.

Scholarship offers rolled in from schools in the Pac-12, SEC and Big Ten. And then Sean Gleeson, the offensive coordinator and quarterbacks coach at Princeton, called. Just think about us, Gleeson told White, and he did. [Washington Post]

So who is Sean Gleeson? I have no idea. What few puzzle pieces exist are starting to come together a little bit to paint a picture of somebody who is loves football (Gundy bingo), wants to be great at whatever he does (nearing a blackout) and now gets the same chance he got at Princeton — to take over an already-humming offense, tweak it and make it even better than it used to be.