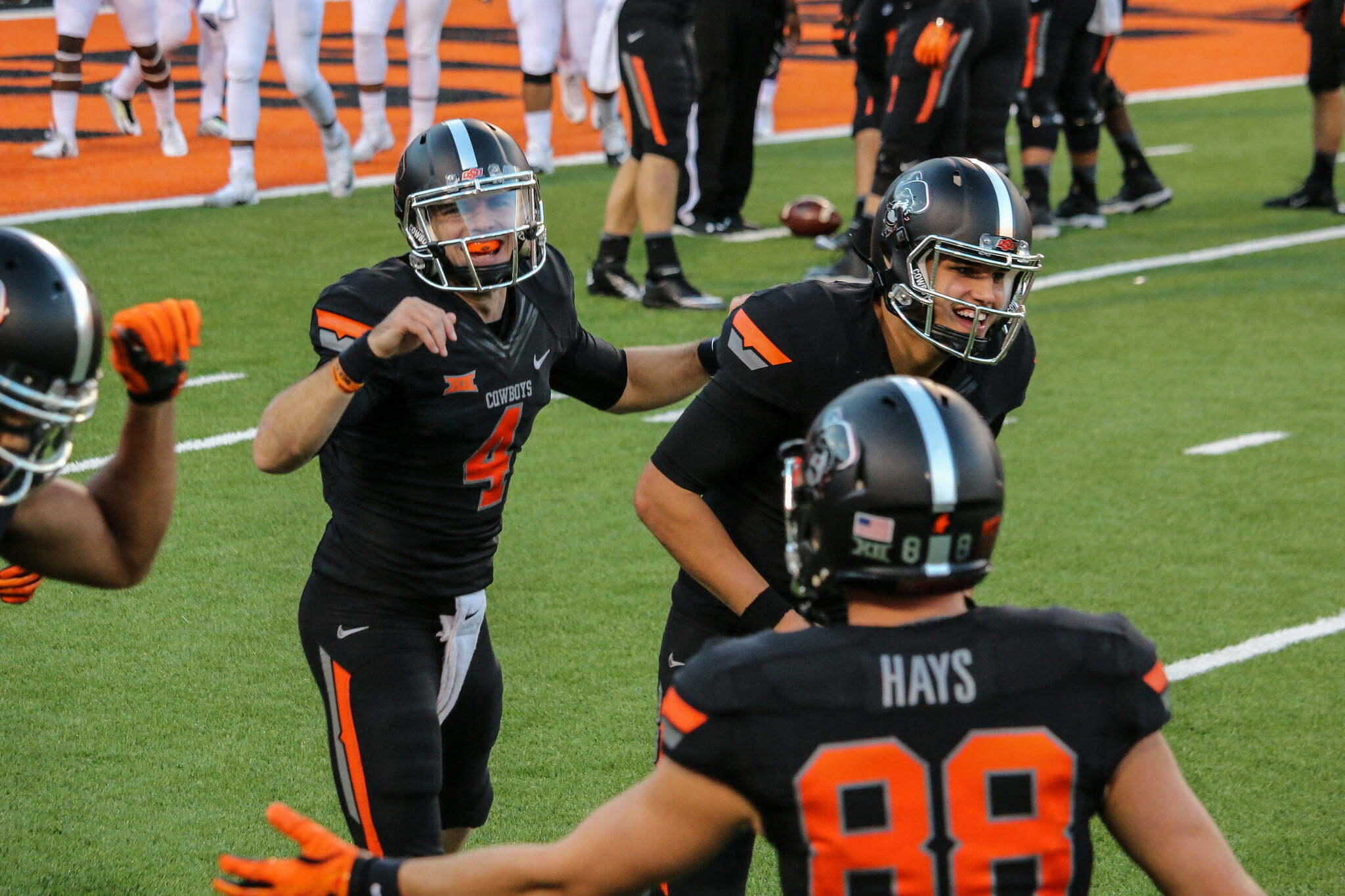 The General came in as one of Mike Gundy’s highest-rated recruits at a time when Oklahoma State football was firing on all cylinders. But his tenure as the Cowboys’ general wasn’t always smooth. He took a ride on the QB carousel through 2012 and 2013 before surfacing as OSU’s starter in 2014, just to lose most of the season to a foot injury — and his command to a true freshman from Rock Hill.

But J.W. Walsh was the consummate pro in a room full of amateurs, forgoing his right to transfer (and probably start) elsewhere to stay and help Oklahoma State rattle off 10 wins as part of that two-headed quarterback monster. More than that, he led his team and helped along Rudolph as a kind of player-coach. Walsh has dropped the player label is currently working up the coaching ranks to possibly someday take his old coach’s job.

Walsh’s carousel partner also had his ups and downs. The Enid native began his career relegated to mop-up duty behind Brandon Weeden in 2010. Chelf went 3-2 as a starter in 2012 and 6-2 in 2013, including a 370-yard, four total TD game against No. 3 Baylor.

Chelf, who didn’t even make it out of the first quarter of 2013, finished the same season with the 8th-best adjusted QBR in the nation and joins Brandon Weeden as the only Cowboy QB to earn All-Big 12 honors.

Lindsay qualifies for this list based on a 2-3 (0-2 in Big 12) start his senior season in 2000. Unfortunately, those five games would be the last of his career following a shoulder injury that saw him replaced by Aso Pogi. The bulk of Lindsay’s career however occurred during the 20th century but we’ll include his entire catalog of work for our ranking purposes.

Despite a 2-0 start, former Cowboy QB Chris Chaloupka lost his job to the freshman from Denver, Colorado in 1997. Lindsay captained Oklahoma State to its first winning season in nine years and earned Big 12 Freshman of the Year honors. His 14-12 record as a starter is nothing to scoff at considering the dark near decade of Cowboy football that preceded him.

Bedlam hero. If we could adjust stats based on offensive styles, Fields would probably be higher. He was the consummate freshman phenom. He came in at the end of the last two games of 2001 and cleaned up Aso Pogi’s mess with wins over Baylor and Oklahoma. Yeah, that game. The Catch.

A year later, Fields was the guy and the Loyal and True were naming their firstborns “Joshua” as he led them to what qualified as the Promised Land. Fields went on to a successful professional baseball career and remains an all-time great and fan favorite.

Robinson is the best dual-threat quarterback OSU’s ever had. His tenure saw the beginning of OSU’s success under Gundy, and he was a huge reason for it. It also included lost time due to injury to two of his biggest weapons in Adarius Bowman and Kendall Hunter. Then there was the Dez suspension. What Robinson was able to accomplish during his tenure was special.

Robinson managed a 23-13 record (despited those bumps in the road) and leads all Cowboys with 10,175 yards of total offense and 88 TDs responsible for. Both records are in serious danger this season.

There’s a point for Rudolph over Weeden that Carson brought up on a recent podcast. In 29 games (which includes one series in Bedlam 2015), Rudolph was sacked 69 times. That’s an average of 2.38 per game. Weeden appeared in 28 games and was sacked 23 times (0.82 average).

We can also look at the 2015 season when Rudolph shared reps with J.W. Walsh who took a chunk of the numbers (787 yards passing and 359 yards rushing with 26 TDs). It was the right move for the team and it might have been the right move for Rudolph but it cut into his numbers. Does Rudolph score 48 TDs on his own? No. But throw 10 scores and 500 more passing yards his way and Rudolph’s got a lot better looking stat line albeit with a probably worse record.

Rudolph is set to break and own pretty much all passing records that matter at OSU. How much more can he make a case? We’re about to find out.

Beyond the numbers — which were ridiculous — Weeden just looked like a pro quarterback when you watched him. He captained a high-powered offense that simply rolled over most teams but fell just shy of the ultimate goal. These top QBs all shared the field with a great wide receiver and Weeden’s was the best and most accomplished to ever play in Stillwater.