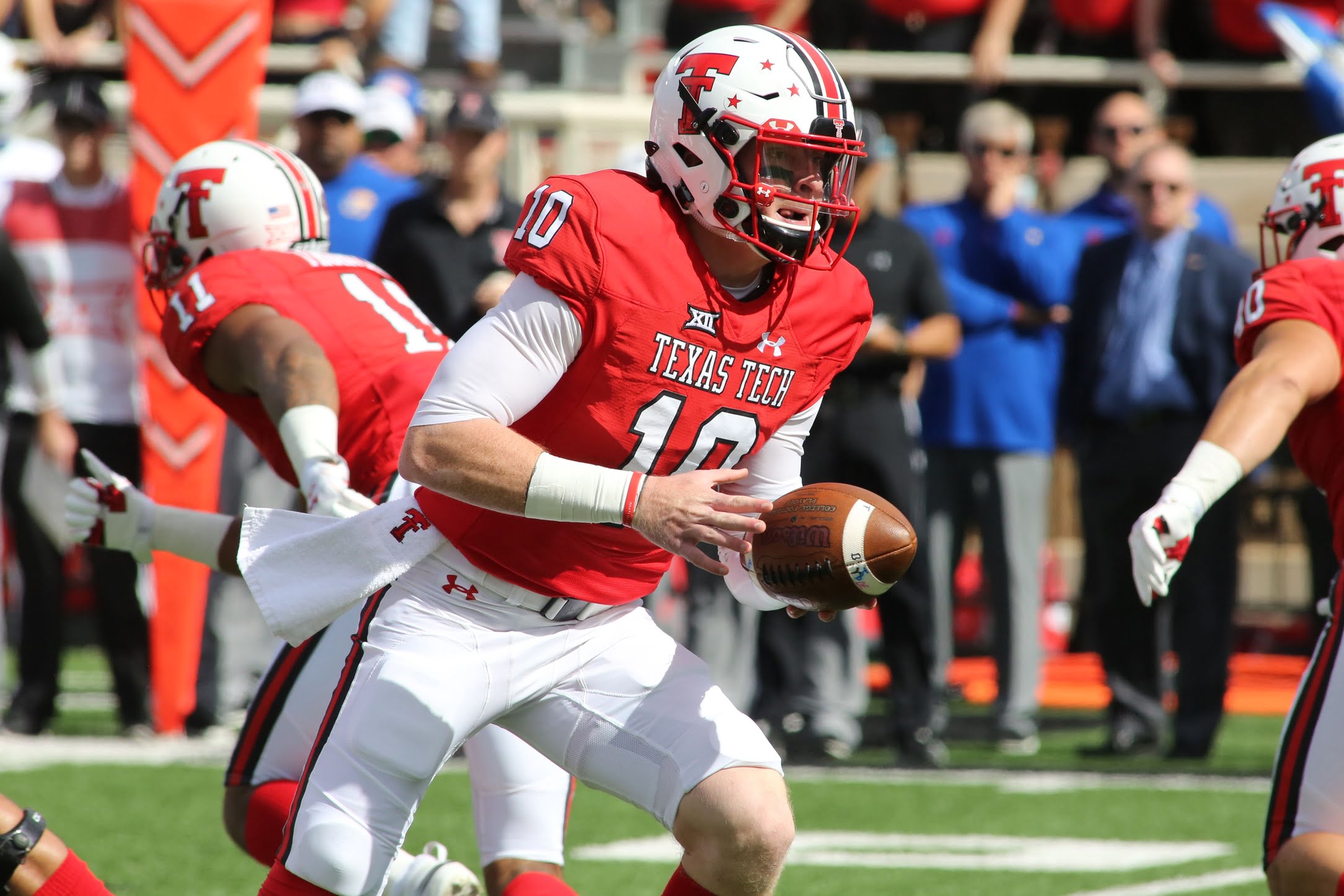 We are now counting down the days, not the weeks.

Soon to return is the distinct hum of generators at a tailgate, the vast lines to the bathroom and the exorbitant price for beers at the stadium. Or, for some of us, there’s the juxtaposition in wait time and price to our own homes. However you plan to consume college football, it will be here before you know it.

This upcoming Big 12 slate is headlined by some titillating offenses led by some intriguing quarterbacks. Here they are ranked by how much my unbiased college football fan side is excited to see them.

I’m intrigued at the prospect of a longterm Les Miles tenure in Lawrence, if that’s what we actually get. Can the Mad Hatter defy the Big 12 status quo — and logic — and turn the Jayhawks into a physical, run-heavy offense?

For now he’ll have to make do with a dearth of talent apart from recently re-instated Pooka Williams Jr. and with a yet unsettled QB race. My money’s on junior college transfer Thomas MacVittie to take No. 1 reps, but it probably won’t matter in 2019.

For the second fall camp in a row, Gary Patterson has to find a new quarterback. Last year he settled on Shawn Robinson, who was less than elite and whose season ended unceremoniously due to injury. That resulted in TCU employing a trick play called “The Grayson Muehlstein.” Oh wait, that was their quarterback’s name.

(Jokes on me. TCU went 5-0 in games in which he saw the field and 2-0 when he started including a win over Oklahoma State.)

There is a handful of candidates to lead the Horned Frogs offense including Kansas State transfer Alex Delton. Your guess is as good as mine — and apparently as good as Gary Patterson’s — which doesn’t bode well for TCU.

Jalen Reagor does return, and is must-see TV, but without a more viable option at quarterback, I can’t get too excited about the Frogs offense.

Gone are the days of Bill Snyder-coached two-star QBs running and throwing for 100 yards each while frustrating the heck out of OSU fans. Except that the most recent offender, Skylar Thompson, is still there and he figures to be the one holding the reins for new head coach Chris Klieman.

Klieman has a more than formidable offensive line returning and a potential lead back to run behind it in Ball State transfer James Gilbert. We’ll see how quickly K-State’s talent level and personnel, respective to the Big 12, can meld with Klieman’s system that was so proficient at North Dakota State.

The Mountaineers represent the biggest variance in my mind when it comes to what I expect from them. (I guess that’s one way of saying I have no idea what we’ll get.)

Neal Brown’s Troy teams were able to put up big numbers, but the question is how quickly he can adjust for the step up in competition from the Sun Belt to the Big 12.

To further cast doubt on WVU’s offense, Oklahoma transfer Austin Kendall has apparently yet to distance himself from other QBs in the room like former Miami transfer Jack Allison.

Charlie Brewer may be the most underrated QB in the Big 12, but he will have to continue to use his legs as he bides time behind an O-line that has been worst in the league at protecting its QB for two years running — and lost two of its starters.

Dynamic transfer Jalen Hurd is gone, but the Bears have their fair share of playmakers like Denzel Mims, who has racked up nearly 1,900 receiving yards and 16 touchdown catches over the last two years.

5. Texas — Solid is Not Exciting

The Longhorns return the Big 12’s current leader in passing yards in Sam Ehlinger and a plethora of high-end talent. But, excuse me. I can’t type E-H-L-I-N-G-E-R without yawning. Charlie Brewer is my pick for most underrated Big 12 passer, UT’s moral leader might be my pick for his polar opposite.

Texas might have the second best team in the league and a top-half offense to go with a legit defense. Texas might even be back, but its offensive unit doesn’t move the needle for me like the remaining four offenses this list.

4. Iowa State — A Lot of Production to Replace

Brock Purdy burst onto the Big 12’s scene starting with his 318-yard, five total-TD win in Stillwater. Purdy went 6-1 as a starter and figures to build off his impressive, record-setting rookie season this fall.

He will be without the Cyclones’ two top playmakers from last year in running back David Montgomery and wide receiver Hakeem Butler. Still, if some younger pieces can step up, the ‘Clones shouldn’t lose much ground on offense with Purdy running the show.

It’s hard to look at this team realistically in the scope of the Big 12. I might be too close! That being said, I think there is plenty for an outsider lookin’ in to get excited about.

You’ve got arguably a top 5 running back in the league in Chuba Hubbard, probably the best returning wide receiver in Tylan Wallace and oodles of playmaking potential all around. And the offensive line lost just one starter from last year.

So the biggest question mark is at quarterback and we’ve yet to get an answer from fall camp. All along I have assumed that Spencer Sanders will be THE guy when the bus pulls up in Corvallis later this month, but the longer we go without a starter named, the more my confidence wanes.

2. Texas Tech — Set Up for Success

Let me repeat that we are strictly talking offense here. Don’t expect a huge step back for the Red Raiders offense despite the departure of Kliff Kingsbury.

There are several reasons that Tech fans should feel good about their offense post-Kliff, but numero uno is No. 10. Alan Bowman, the freshman phenom, took the Big 12 by storm, once again, starting with Oklahoma State last year.

The gunslinger averaged 330 yards in eight games before a lung injury harpooned this rookie season, and the Red Raiders’ chances to upset the conference champs. (Bowman left for good late in the second quarter and Tech held a halftime lead.)

The Red Raiders said good bye to leading receiver Antoine Wesley to the NFL and Ja’Deion High to eligibility, but return T.J Vasher who caught 54 balls for 687 yards and seven scores as a sophomore last year. And who are we kidding? Tech will field speedy dudes who can make plays in the passing game.

The biggest difference will likely be a renewed emphasis on running the ball from OC David Yost, who is attempting to install his own exciting, productive offense. At Utah State, he produced the second-most points per game in the FBS behind Oklahoma last year.

With Bowman now healthy, I’m ready to see what Tech can do.

I can’t with a straight face say that I’m excited about the Jalen Hurts era at OU. But if I’m impersonating a non-biased college football fan who values offense, it would be hard not to get fired up about the Sooners. (That’s a big IF.)

There will be some growing pains in the trenches — OU lost four starting linemen to the NFL Draft — but Bill Bedenbaugh is one of the best OL coaches in football and the line is anchored by a stud in Creed Humphreys. There is always skill talent at OU and the scheme is probably the best in football.

Look at what Lincoln Riley has done the last two years with transfer QBs who arrived in Norman mostly under the radar. What’s he going to do with one of the most sought-after and accomplished transfers ever? That’s a scary thought.

I don’t think Hurts is on the level of Baker Mayfield or Kyler Murray when it comes to arm strength, but I know better than to doubt Lincoln Riley and his ability to put his guy in a position to be successful.