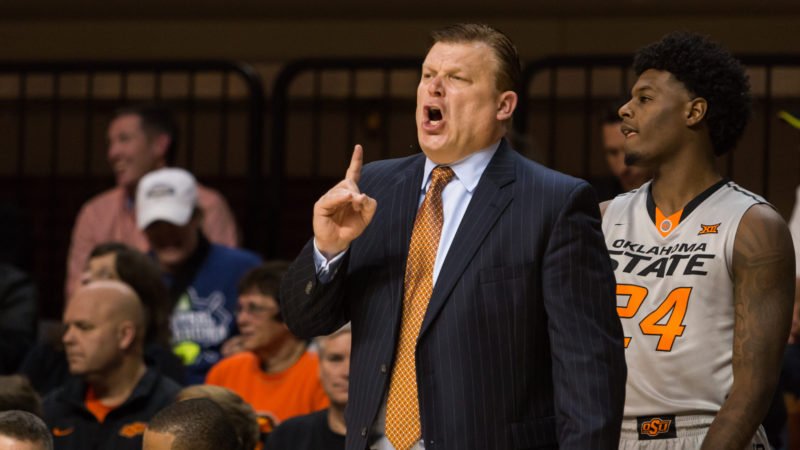 For the second-straight game, OSU fell behind by as much as 14. This time they were devoid of the comforts of home. Digging themselves a double-digit hole is probably not something Brad Underwood sets out to do. In the Big 12, it’s playing with fire.

But the Cowboys steadily chipped away at the home team’s lead and ended the game outscoring the Underwood’s alma mater 61-35.

For Underwood, it was more effort than execution.

“It was not an adjustment,” Underwood said. “I would like to take credit for it, but Phil Forte III did what a senior does and he dove on the floor for a loose ball. I got upset in the timeout and jumped them because our energy was bad. Phil made that hustle play and it really got us going. It kind of picked up our energy level.

“It was Phil’s hustle play that made the biggest difference.”

Speaking of senior difference makers, how great has Leyton Hammonds been as of late? He’s always been valuable on defense and but his offense has led the way recently. Over the last four games, Hammonds is shooting 60 percent from the field and 53 percent from 3.

But Hammonds still knows what his calling card is — and what his team is striving to make theirs.

“Everybody has bought in,” said Hammonds “which is the main thing. We are trying to play the game the right way, as in defensive rebounding. We are not really worrying about offense because when you have one of the best point guards in the country you kind of do not have to.

After getting out-rebounded 18-15 in the first half, Underwood made it a point of emphasis at halftime.

“We talked about at halftime being down on the glass,” said Underwood “which has not happened to us a lot. Leyton Hammonds was terrific throughout the night on the glass.”

His team listened. The Cowboys grabbed 22 rebounds to Kansas State’s 13 in the second, including Hammonds’ seven rebounds (three were offensive). As a result, the Cowboys took nine more shots than the Wildcats in the second half.

This is an area where OSU has struggled all season. When it comes to grabbing offensive boards, they have been great. Keeping other teams from grabbing them? Not so much. OSU is No. 5 in the country in offensive rebounding percentage (they grab two of every five shots they miss). On defense, they give up nearly as many offensive boards. The NCAA average is on the far right.

Underwood will need to continue his emphasis on the battle for the boards as they head into a Saturday matchup with Texas Tech — a team that ranks behind only Baylor and Kansas in rebounding margin in the Big 12.

The Red Raiders are a better team than their record suggests.

Over the last four games, the Red Raiders have lost to Kansas, at West Virginia and to Iowa State by a combined 12 points. The other game was a home win over Baylor. All four of those teams are in KenPom’s top 25.