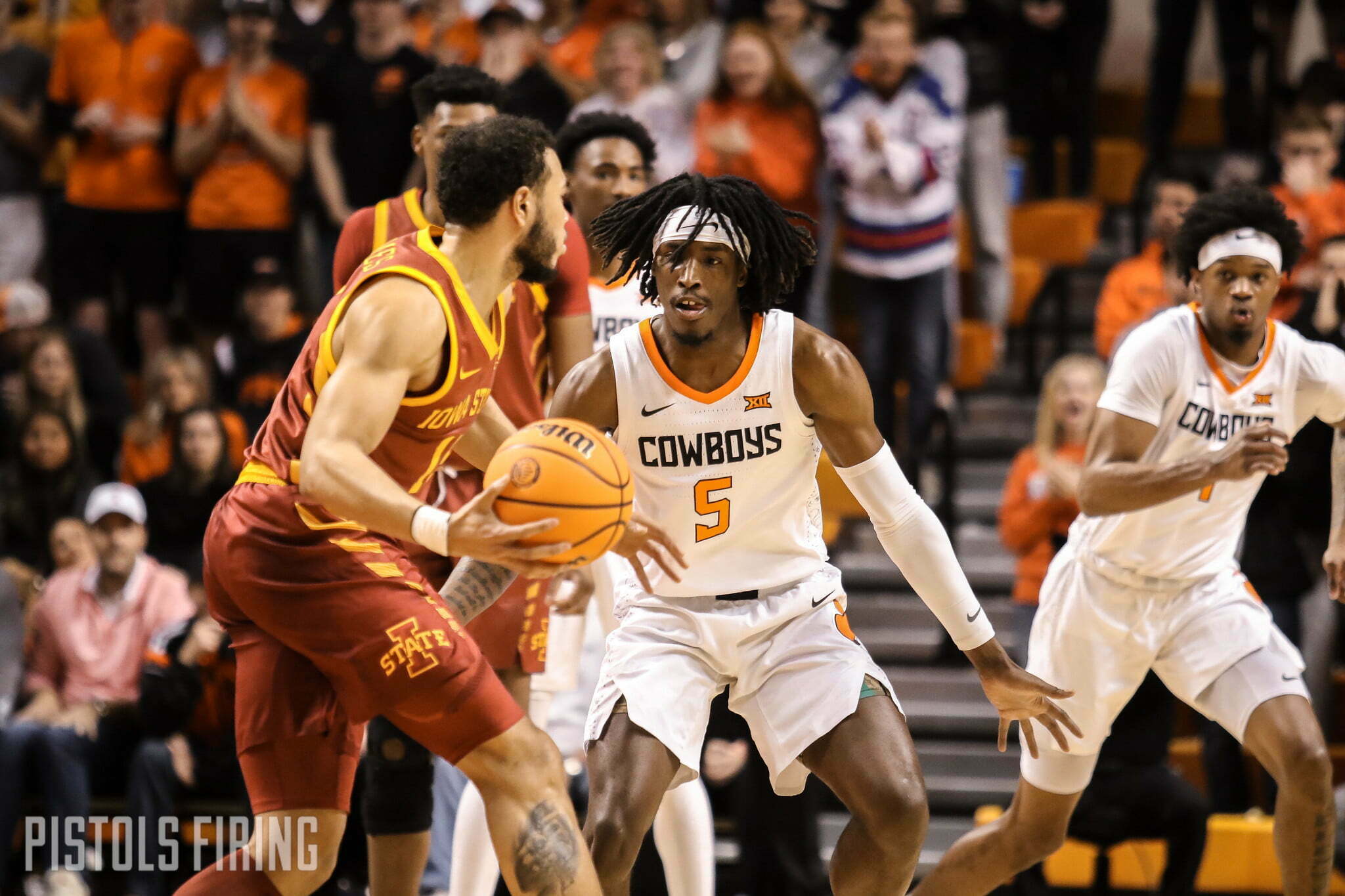 Oklahoma State defeated No. 12 Iowa State 61-59 despite trailing for over 35 minutes of game time and being without their leading scorer most of the way. It was OSU’s first Top 25 win all season.

To complete a big comeback, you must first fall behind.

OSU scored 48 points in the second half against Oklahoma on Wednesday night, but that momentum did not carry over to the Cowboys’ start early Saturday afternoon. The Cowboys started making just one of their first five shots and two of their first eight. OSU shot just 7-for-23 (30.4 percent) in the first half and 27.3 percent from 3.

The Cyclones built as much as a 16-point lead in the first before the Cowboys threw together their own 7-0, over just 1:17, and then another 7-0 run toward the end of the half to pull within six. The Cowboys missed six-straight field goal attempts and went to the half down 10.

Things got worse before they got better.

Down 10 early in the second half, Bryce Thompson came down awkwardly on a missed 3-point attempt, rolling his left ankle on a teammate’s foot on the bench. He immediately went to the ground clutching his lower leg and then hobbled into the locker room. Thompson didn’t return and totaled just one point.

Fortunately for the Cowboys, Avery Anderson may have officially bucked his early January slump. Following up a 14-point performance in the win over Oklahoma, Anderson led all scorers and tied his season high with 18 on just nine shots. He did have eight turnovers but dished out five assists and grabbed three boards and blocked a career-high three shots. Most importantly, he was the Cowboys’ engine down the stretch starting with his first made 3-pointer in Big 12 play.

This week, Cowboy guards turn into Steph Curry in the second half.

After shooting 3-for-11 from deep in the first half, the Cowboys’ climbed back into the game with a barrage of made 3-pointers. For the second straight game, OSU was 6-for-10 from 3 in the second half.

The Cowboys took their first lead of the night with a pair of made free throws by Anderson with 3:09 left. Anderson found Kalib Boone for an easy dunk on a pick-and-roll. Boone finished with 13 on nine shots and two rebounds.

Iowa State’s Gabe Kalscheur made a clutch 3-pointer with 1:25 left to tie it at 57, but Anderson answered with his own layup to give the Cowboys back the lead with 61 seconds remaining.

An Osun Osunniyi attempted dunk bounced high off the rim and out of bounds. On the in-bounds play Avery Anderson lost his footing which resulted in a tie ball and the Cyclones recovered. When Osunniyi was fouled he missed both free throws, and Newton grabbed the rebound allowing the Cowboys to call a timeout, and the free-throw game was on. Caleb Asberry went one and one to give OSU the 60-57 lead. Tamin Lipsey’s layup made it 60-59 OSU with 17 seconds left.

Avery Anderson was almost tackled after taking the in-bounds pass but was called for the travel, his eighth turnover. ISU’s Tre King had a good look at a potential game-winning 3, but it was short.

Moussa Cisse has been limited in the last two games after missing three with an ankle injury. He’s still not back to near 100 percent, but he had a big block in the second half when he pinned an ISU shot against the backboard and then walked away gingerly. But his biggest play came on the rebound he secured off that Cyclone miss. He went down grabbing his ankle and had to be helped off the floor, but the possession allowed the Cowboys to hold on for the huge win.

Woody Newton made the first of two free throws to give OSU the 61-59 lead with three seconds left and that was the final score.

OSU completed the comeback over a Top 15 team despite losing the battle for the boards 39-31 and coming up short on turnovers with 16 to ISU’s 10. A crazier stat is the free-throw disparity, in more than one way. At one point in the second half, OSU was 10-for-20 from the charity strip while Iowa State was just 2-for-3. The two teams finished at 57 and 58 percent, respectively, but the Cowboys got to the stripe 28 times to the Cyclones’ 12.

With the win, OSU moves to 11-8 on the season and 3-4 in conference play. Next up, the Cowboys head to Austin to try to build on that win streak against Texas. The Pokes and Longhorns square off Tuesday night at 8 p.m.