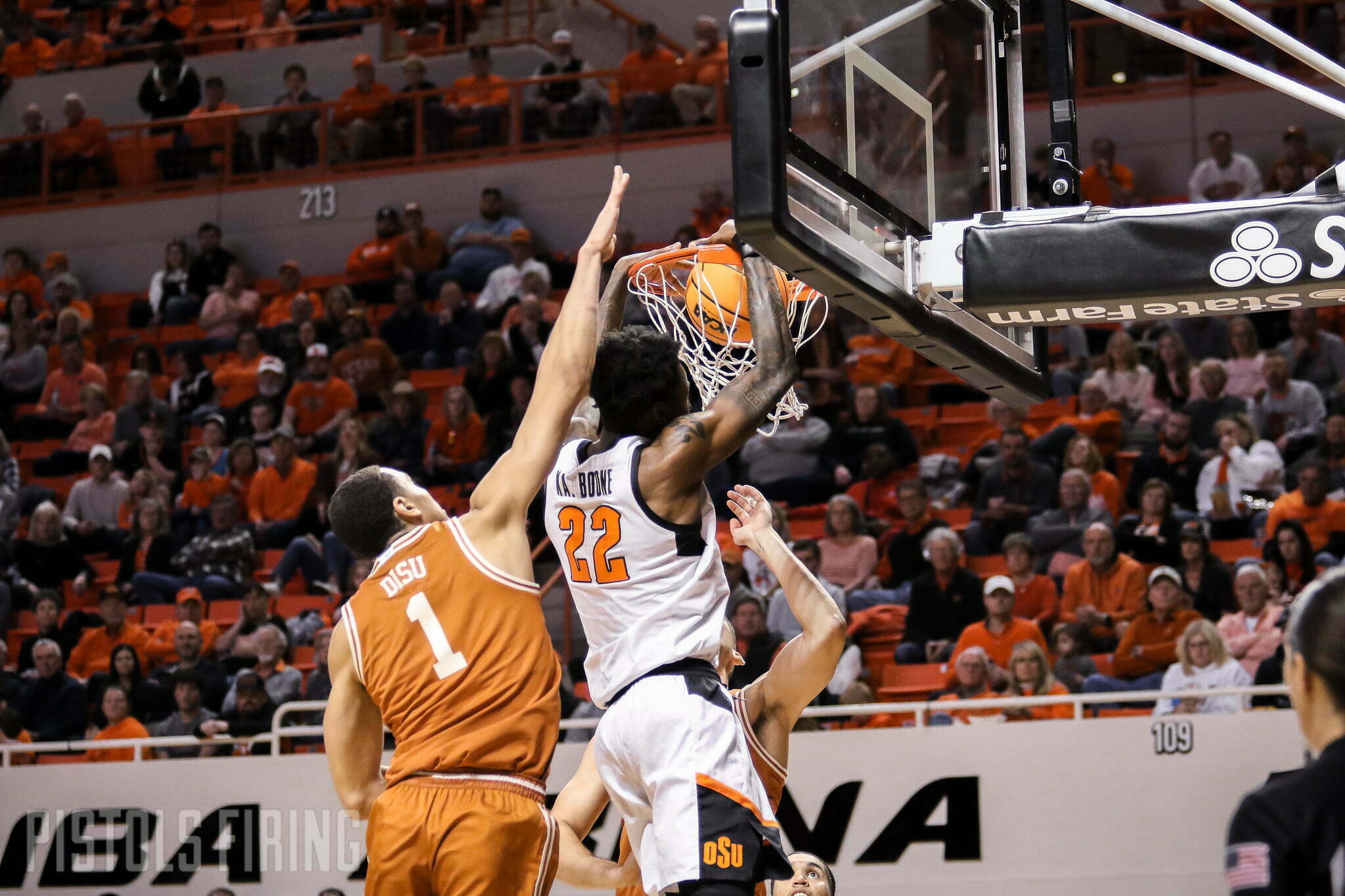 AUSTIN, Texas — The Cowboys stayed within arms reach of Top 10 Texas most of the night, but the Longhorns were giving them a Ricky Williams stiff-arm.

Oklahoma State fell to Texas 89-75 (the most points OSU has allowed this season) on Tuesday in the Moody Center, ending the Cowboys’ two-game winning streak. The Cowboys seemed perpetually down somewhere between eight and 11 points but just couldn’t put a run together to get over the hump. Every time it looked like OSU was getting going, Texas would answer. It was like a boxer keeping a foe away with a good jab.

The Cowboys’ biggest second-half run was 5-0. Texas answered with a 6-0 run. There was a five-minute run in the second half where neither team had more than a 3-0 run. They were just trading baskets.

Texas finally pulled away late shortly after reigning Big 12 Player of the Week fouled out. Anderson finished having played 24 minutes where he had six points, three rebounds, nine assists and one turnover. It’s the fewest amount of minutes Anderson has played since the Cowboys’ loss to Kansas State on Jan. 10, when he was dealing with a wrist injury.

Timmy Allen had a big second half for the Longhorns, scoring 14 of his 17 points. Eleven of Allen’s points came in the final 10 minutes.

John-Michael Wright and Kalib Boone were the Cowboys’ best scorers, putting up 18 apiece.

It’s Wright’s first game in double figures since his 11-point outing in OSU’s win against West Virginia on Jan. 2. Wright hit four 3s at a 40% clip.

Boone was an uber-efficient 8-for-9 from the field, dunking four times. Most of his work came in the second half after playing only 11 first-half minutes because of foul trouble. Boone scored 10 points in the final frame.

The Cowboys went into the break down 40-32. They were down by as many as 11 in the half after Texas ripped off an 11-0 run that made it 17-6 with 12:52 to play. But then the Cowboys’ offense found some footing. Oklahoma State hit four first-half 3s, clawing to within three after a Bryce Thompson 3 with 4:33 to play in the half.

Kalib Boone led the Cowboys with eight first-half points, six of which came via dunk. After three straight games in double figures, Avery Anderson didn’t score in the first half, but he had seven assists and no turnovers.

The Longhorns killed the Cowboys on the boards in the first half, having a 23-15 advantage (UT finished the game with a 41-27 win on the boards). That gave UT a 12-2 advantage in second-chance points, and Texas had 14 points in the paint in the half. Texas guard Marcus Carr was the only player to go into the break in double-figures, scoring 12 points in the first half. He was 2-for-2 from 3 and also had a trio of assists. He finished with a game-high 21.

The loss moves OSU to 3-5 in Big 12 play and 11-9 overall 20 games into the season. The Pokes will get a break from the Big 12 gauntlet this weekend as they host Ole Miss in the Big 12-SEC Challenge. That game is set to tip at 7 p.m. Saturday in Gallagher-Iba Arena.