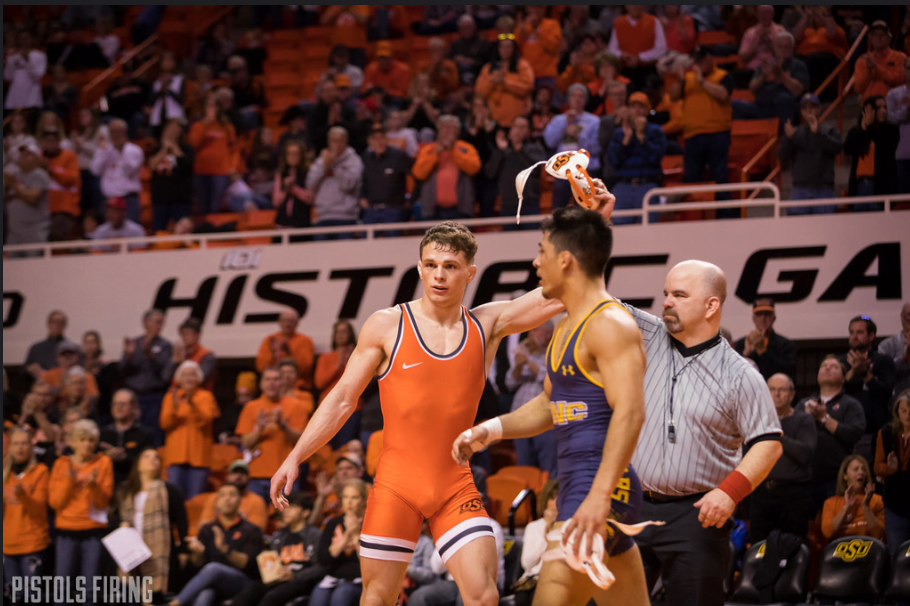 STILLWATER — Well, that was ugly.

The Oklahoma State wrestling team dominated Northern Colorado 36-3 on Sunday in Gallagher-Iba Arena. Six matches ended as bonus-point victories for the Cowboys, including technical falls at 125, 165 and 197.

The most entertaining match of the night was probably the only one OSU lost. At 133, Reece Witcraft and No. 19 Mosha Schwartz put on a classic. For most of the match, Witcraft looked the better wrestler.

Witcraft scored four takedowns in the first period, but Schwartz escaped from all of them before landing a takedown himself at the end of the frame. Witcraft started the second with an escape but was again taken down. OSU’s true freshman entered the third up 9-8.

In that third period, Schwartz escaped, got taken down, escaped again before taking his first lead of the bout with a late takedown. So in the end, Witcraft had five takedowns and still dropped the bout.

“You take a guy down four times and give up a takedown, no riding time, right?” OSU coach John Smith said. “Didn’t work at it. Every time it got a little bit tough, it didn’t look like Reece responded, right? When you’re taking him down, that’s not always tough, but when somebody’s fighting back, now it gets tough.”

“… When it got tough, he wasn’t tough. That’s the difference.”

Northern Colorado has a few ranked guys, but the Bears only sent one out Sunday. At 149, No. 3 Boo Lewallen and No. 17 Andrew Alirez had a competitive match. The bout entered the third period tied at 3. In the third, Lewallen put distance between he and Alirez, scoring on an escape and a takedown before getting a 4-point nearfall to eventually win 11-4 with riding time.

There was a possibility that Kaden Gfeller and Joe Smith would wrestle in Gallagher-Iba Arena for the first time this season after both wrestled in the Southern Scuffle, but instead Dusty Hone came out for the Pokes at 141 and Andrew Shomers at 174.

Shomers, Joe Smith and Gavin Stika all weighed in at 174, but John Smith said he went with Shomers because that’s who he felt they needed to go with. Smith also said that it’ll be week to week at that weight.

It worked out fine for the Cowboys as Hone and Shomers each won with major decisions and neither gave up a point.