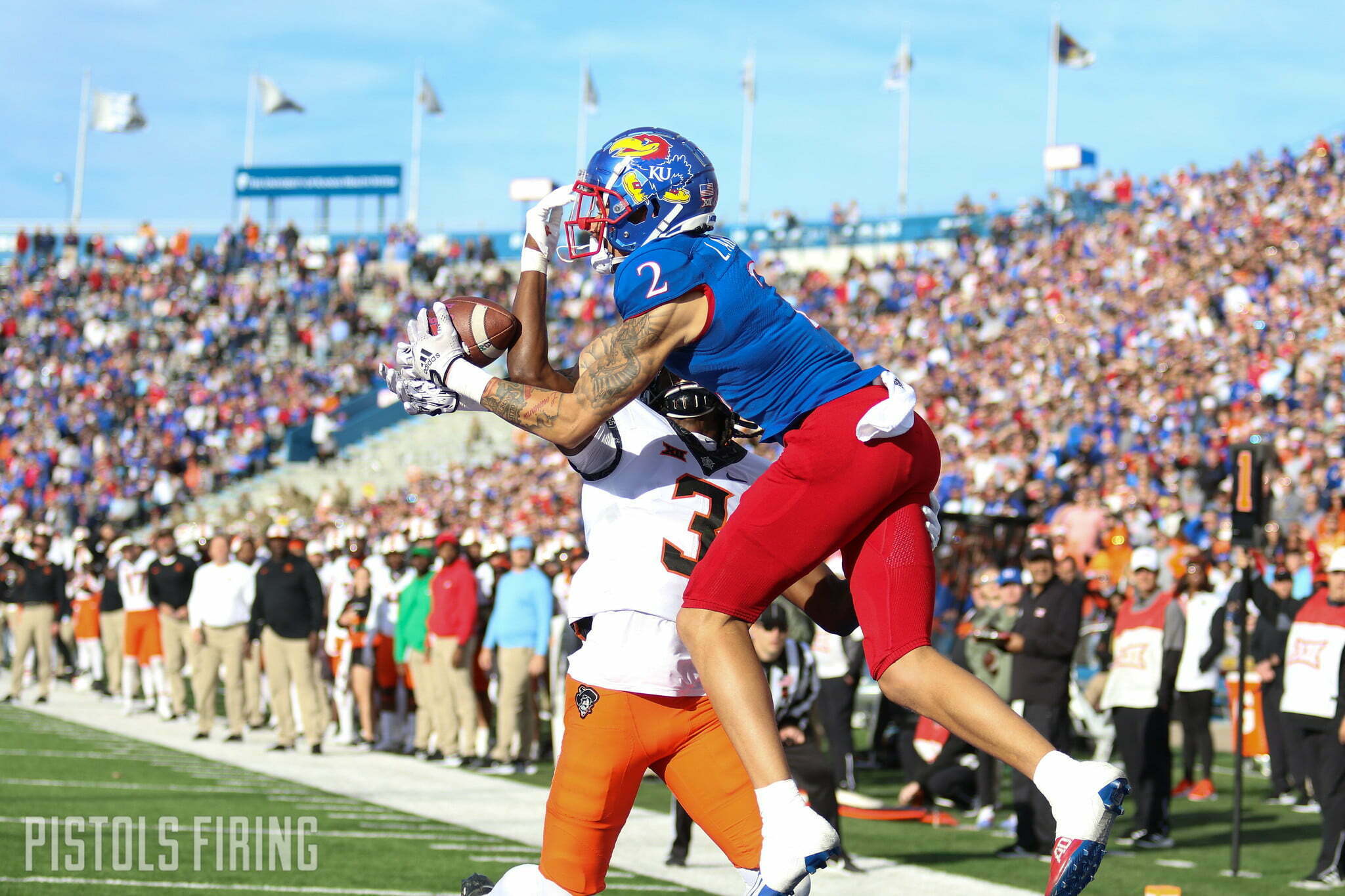 Kansas snapped its 12-game losing streak to Oklahoma State and did so in dominant fashion on Saturday, taking a wire-to-wire win over the Cowboys in Lawrence to attain bowl eligibility for the first time since 2008 in a 37-16 win.

Without starting quarterback Spencer Sanders, who did not play at all in the game because of a shoulder injury, OSU turned to true freshman Garret Rangel instead of Gunnar Gundy, the listed No. 2 on the depth chart. Rangel had some early struggles with a pair of picks before finishing 27-of-40 passing for 304 yards and two touchdowns.

Sixteen points on offense isn’t going to win OSU many games, admittedly, but it was the defensive side of the ball for OSU where Kansas was able to take advantage early, in the middle and late … and often.

Kansas broke the seal with a 31-yard rushing touchdown from Devin Neal to start the game, which was foreshadowing of what was ahead. KU finished with a whopping 351 yards rushing, which was the fourth most for the school in a game since at least 2000, according to CFB Reference data.

Neal’s big hitter from deep a la Stephen Curry wasn’t even the biggest gash OSU’s defense allowed. Backup quarterback Jason Bean had perhaps the highlight of the day that more than doubled Neal’s big rushing TD, going for 73 yards in the second quarter to help lift KU to a 17-7 lead. That was the second time KU took a double digit lead in the game, and it did not get closer from there.

Rangel, who had attempted just two passes in a game as a college player prior to starting and playing the entirety of the game for OSU at quarterback, did show signs of life. Some big boy throws he made in the second half looked really impressive. He didn’t look quite ready to be QB1, but then again, what true freshman is?

He didn’t have much help by way of ground support which added to the struggles. Dominic Richardson returned from injury to rush for 51 yards on 14 attempts, which led the team. Deondre Jackson added 34 yards on five attempts. And both Brennan Presley and Jaden Nixon got one carry each. But as a team OSU rushed for 3.2 yards per carry for a total of 111 attempts. Unfortunately, the game script — falling behind early — dictated that establishing the run would be fruitless anyway.

Prior to the loss, OSU had won seven consecutive games following a loss under Gundy, which was one shy of matching the second-longest such streak in school history. Instead, it is the first two-game losing streak since 2019, with the scoring differential of negative 69 going down as the largest in a two-game losing skid in the history of the Gundy era — besting a negative 66-point differential in a two-game skid that happened in Gundy’s first year in 2005.