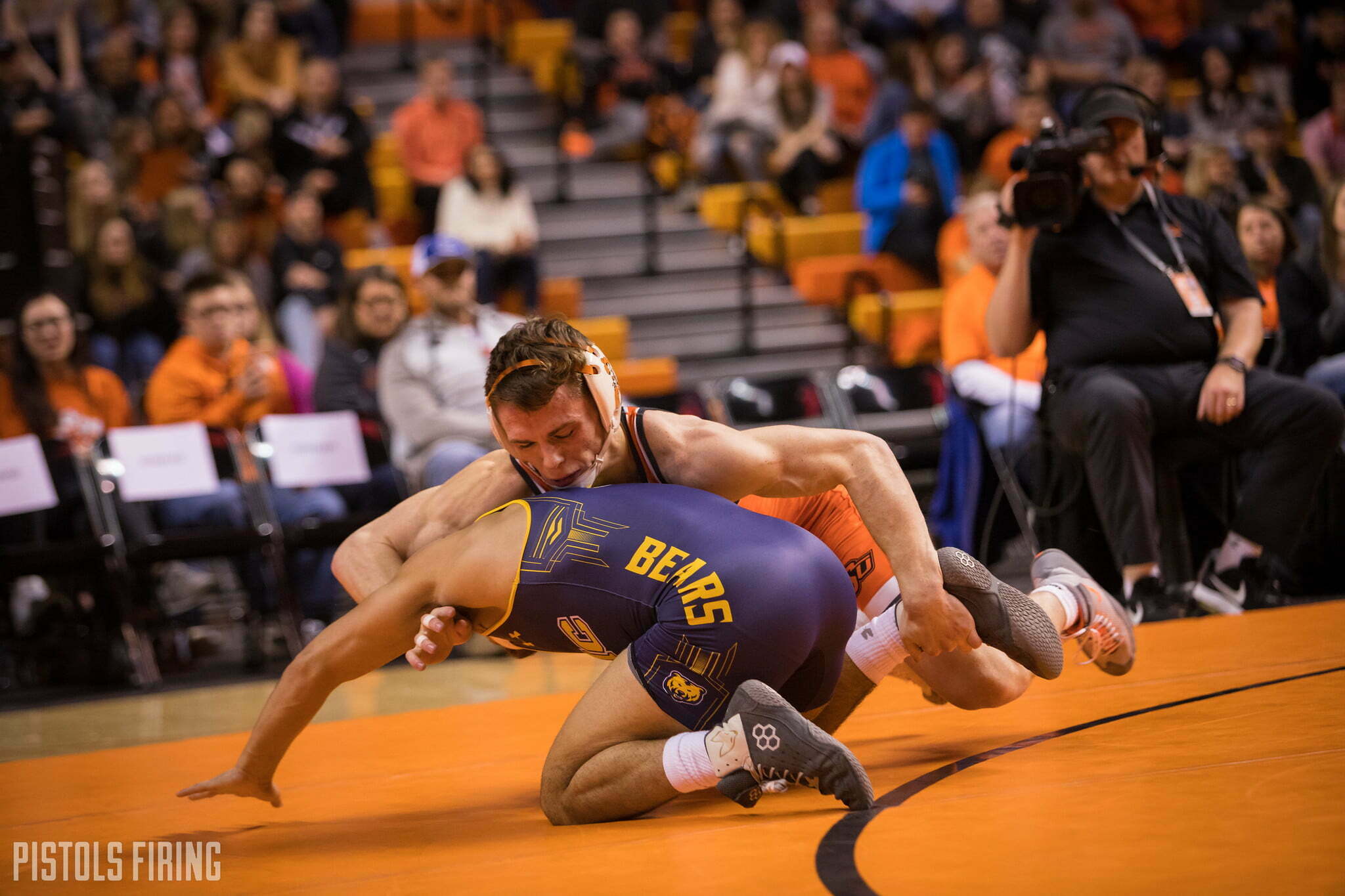 STILLWATER — That was about as dominant as it gets.

Oklahoma State ran though South Dakota State on Friday night in Gallagher-Iba Arena, winning 35-3. The Cowboys and Jackrabbits entered the night with matching 4-1 Big 12 records, but it was not even almost close.

South Dakota State had four ranked wrestlers, but all of them lost. The only match the Jackrabbits picked up was the heavyweight bout at the end of the night when Blake Wolters beat Austin Harris. Not too surprising, Cowboy football players Brock Martin and Malcolm Rodriguez didn’t weigh in.

The match of the night probably came at 184 as Anthony Montalvo was able to knock of No. 14 Zach Carlson thanks to a last second takedown.

Tied at 1, the GIA crowd began to roar behind Montalvo with time ticking down. Montalvo shot in and wrapped Carlson up on the south side of the mat. The officials didn’t initially award Montalvo the takedown, which had OSU coach John Smith halfway down the mat. After a lengthy review, it was determined Montalvo scored a takedown with a single second to go.

During most of the review, Montalvo was standing in the middle of the mat waiting on overtime, though he and OSU coach John Smith were fairly certain he scored the takedown.

“I’d like to think that I could beat him in any scenario,” Montalvo said. “Obviously I got the takedown, but if he was going to come out again, I would want to take him down right away. I wish we still would’ve went into overtime, honestly. I knew I got the takedown. I felt the collection of both legs. But I’ll see him again, so we’ll make sure it that it’s not a last-second takedown next time.”

In his first bout as 149’s No. 1, Boo Lewallen defended his top ranking with a dominant third period against No. 11 Henry Pohlmeyer.

Lewallen entered the third period with just a 1-0 lead before his top game took over. In the third, Lewallen accumulated eight back points and a point for riding time to pull away from his ranked foe.

“I don’t think I’ve had that type of confidence on top my entire career until this year,” Lewallen said. “It’s nice to have it, but I want to get takedowns.”

Joe Smith wrestled his first match in GIA since Feb. 3. In his return to the orange mat in the first time in nearly a year, Smith topped Kelby Hawkins 9-3. The No. 11 wrestler in the 174-pound weight class, Smith is now 4-2 on the season.