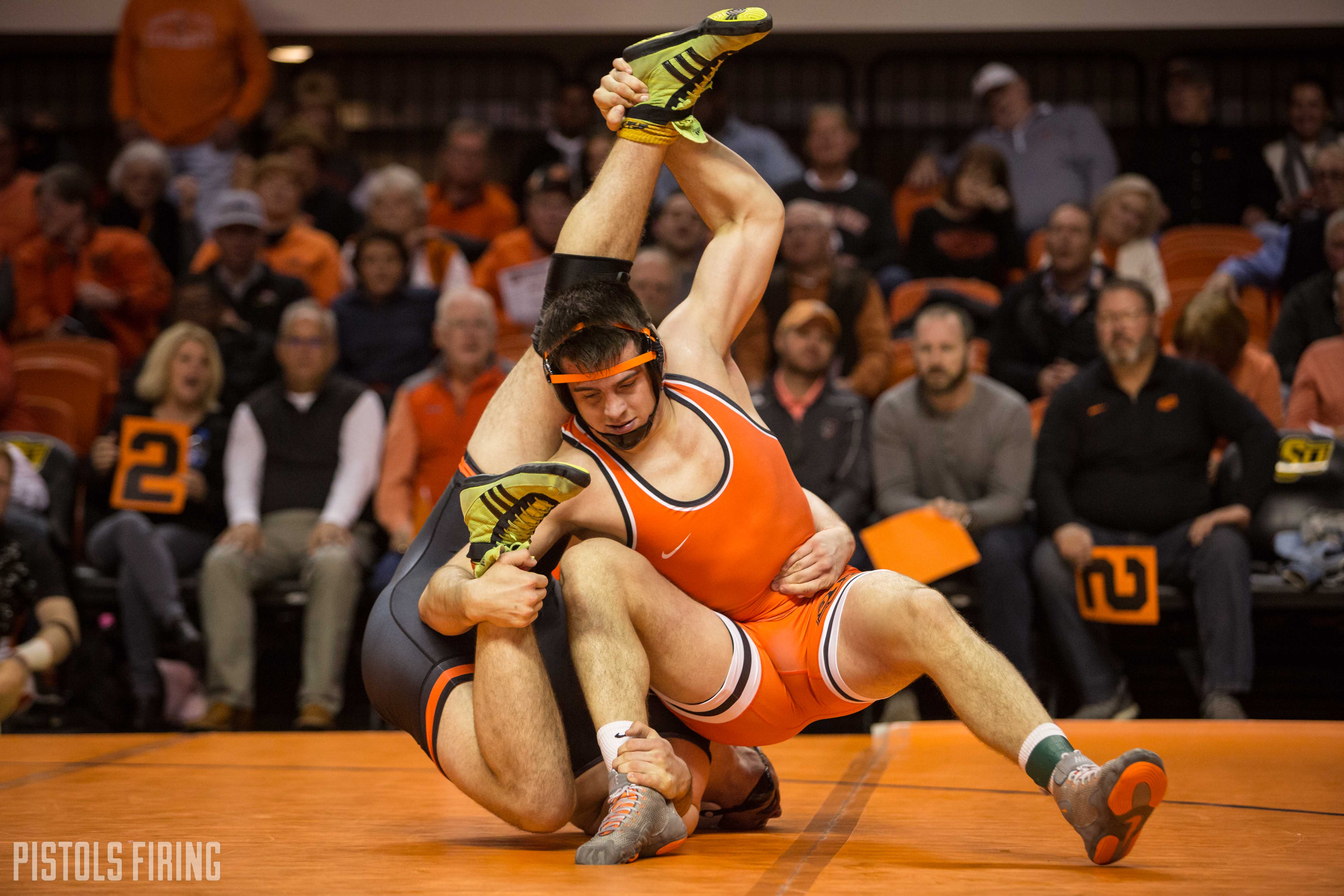 STILLWATER — The Cowboys had dropped a trio of matches, and their six-point head start had evaporated until Austin Harris stabilized things.

The Oklahoma State wrestling team defeated Princeton 18-15 on Friday night in Gallagher-Iba Arena, thanks in large part to Harris’ 5-2 decision victory over Aidan Conner. It didn’t start great for Harris, though.

With his team down 9-6, and the Pokes only points coming from a forfeit at 165 where the dual started, Harris found himself down 2-0 heading into the second period. But Harris, lighter than most heavyweights after starting his college career at 174, was able to outlast his opponent. He picked up a reversal and a two-point nearfall in the second and won the bout 5-2 with riding time.

“Yeah, I think I’m a little bit smaller, so I gotta better gas tank than a lot of these big guys,” Harris said. “I just try to use that to my advantage. I could definitely tell he was a little bit tired at the end.”

The Cowboys needed their undercard  to perform well to take out the Tigers after falling in the dual’s featured bouts at 197 and 125. In those matches, No. 2 Patrick Brucki topped No. 6 Dakota Geer 12-6 in a dominant outing. Then at 125, No. 3 Nick Piccininni fell 9-4 to No. 4 Pat Glory. Piccininni pinned Glory last season.

“Just no attitude,” OSU coach John Smith said. “Just kinda holding ground like they’re trying to hold onto something. Just a poor mentality out there. It wasn’t so much about not getting takedowns or not doing something in particular, just the attitude. Hey, it got tough, and you better get tough. Just didn’t seem to put it together.”

No. 14 Boo Lewallen was the Cowboys’ only winner in a ranked vs. ranked matchup Friday night. Lewallen topped No. 14 Mike D’Angelo 7-4.

Other than that it was Reece Witcraft and Dusty Hone scoring for OSU, not the usual suspects.

“It’s good to see us win the (133) with the freshman (Witcraft),” Smith said. “Good to see Dusty Hone at 141 with a good win for him. Of course, Austin Harris picking up the win at heavyweight, those are three weight classes that, when you say you’re gonna lose at 125 and you’re gonna lose at 197, I’d have told you it would’ve been hard to win that match.

“That’s what teammates need to do, they need to pick it up when things aren’t going very well. We had that from guys that are in the lineup we thought it’d be tough for them to win tonight.”

Wyatt Sheets and former OSU star Kenny Monday’s son, Quincy Monday, wrestled last at 157. All Sheets needed to do was avoid getting pinned by the No. 9 Monday, and Sheets nearly won.

The match went into the third tied at 2, but a Monday escape gave the Princeton man the victory. But Sheets did his part and secured the win for the Pokes.