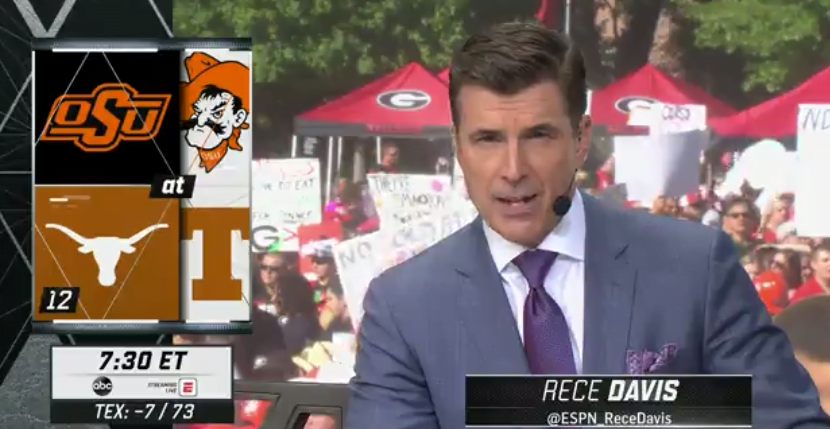 Kickoff for the Cowboys’ annual meeting with the Longhorns might still be about 10 hours away, but the folks at ESPN’s College GameDay are here to get you juiced.

Oklahoma State and Texas kickoff at 6:30 p.m. in Austin. The Cowboys are looking for their sixth straight victory in Texas’ capital, and Rece Davis went in on Gundy owning the ‘Horns in Austin.

What followed was a bit of a hype video for the matchup focusing on how scary OSU’s offense can be for opposing defenses. The video showed Herman calling OSU’s attack the “scariest environment imaginable” and UT defensive coordinator Todd Orlando calling 50/50 balls with Tylan Wallace more like 90/10.

The hype video also had a special cameo from … PFB! The clip of Chuba Hubbard talking was our clip from Tuesday.

After the hype video, Kirk Herbstreit broke down how OSU got to this point with the preseason quarterback battle between Spencer Sanders and Dru Brown and new offensive coordinator Sean Gleeson coming in.

Then David Pollack went a little deeper on Sanders’ athleticism:

Sanders has flown (sometimes literally) to the tune of 219 rushing yards through three games.

Then Desmond Howard came in and said just because the Pokes aren’t ranked and Texas is No. 12, this is no lock.