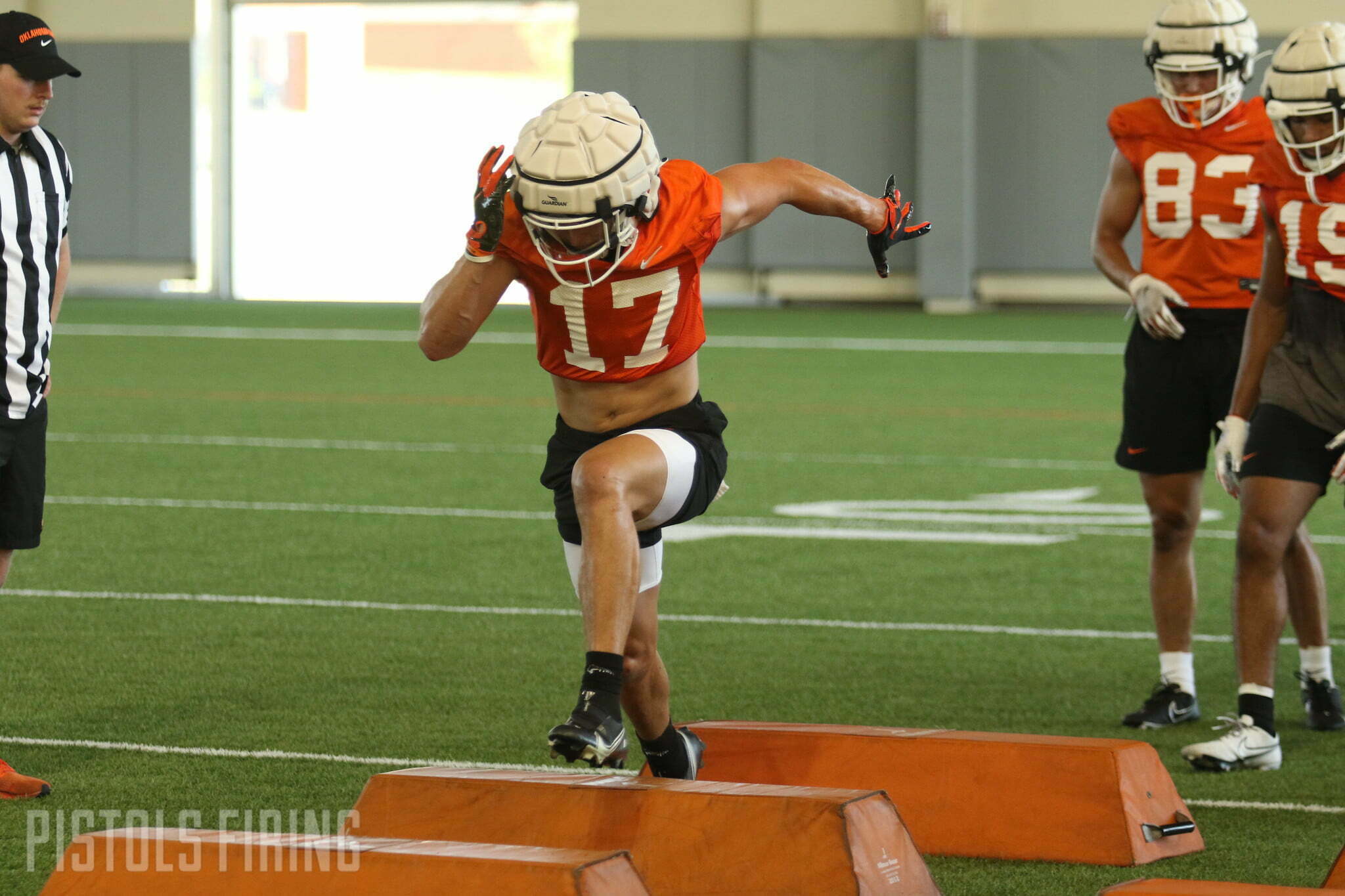 STILLWATER — A lot has already been said about the development of Oklahoma State’s receivers this fall, but along with the Cowboys just having better pass catchers, that group could unlock a few more wrinkles for Kasey Dunn this fall.

In particular, John Paul Richardson’s emergence could open up more four-receiver sets in 2022 as OSU looks to get Richardson and Brennan Presley, two slot receivers, on the field at the same time.

Richardson had 23 catches for 168 yards and two touchdowns in his freshman season. The son of former Texas A&M quarterback Bucky Richardson, John Paul has received glowing reviews since stepping onto campus in Stillwater, despite being the No. 1,087 recruit in the 2021 class. Berry Tramel asked Dunn what he likes about Richardson earlier this week, and Dunn started with a simple, “everything.”

“He’s got a lot of moxie,” Dunn said. “His dad, obviously Bucky Richardson. He grew up in a football family. It’s second nature to him. He’s got this unbelievable FBI — football IQ. He just does all the right things. We kind of kid him about being the accountant. I think it’s that kid from the Raiders [Hunter Renfrow] that’s making all those plays, played at Clemson. Very similar. Just in the right position, does the right things, never makes a mistake MA-wise — missed assignments. And when we throw him the football, he catches it. I think he was 25-for-25 last year. He won our catch ratio competition that we have at receiver. It’s hard to beat 100%. He’s just a guy who produces, and he loves to compete. He’ll talk a bunch of crap, too. It’s fun working with the kid.”

With Richardson and Presley both warranting playing time on the inside and guys like Jaden Bray, Braydon Johnson, Rashod Owens and Bryson Green on the outside, Dunn said he thinks OSU will use more four-receiver sets in 2022, spreading opposing defenses out more.

Dunn said that should also be a benefit to fourth-year starting quarterback Spencer Sanders.

“I think it helps Spencer to spread it out to give him some lanes in there,” Dunn said. “If people want to try to pressure us and we’re opened up in sets, I think Spencer can make somebody miss. He’ll make the first guy miss, and then who’s home from there? So, to play it a little bit spaced out, I think plays into Spencer’s strengths. And we’ve got the slots to do it. We’ve got the depth at slot to do it.”

But, even if the Cowboys have a tight end on the field, there is a chance that tight end is actually just a jumbo receiver.

Blaine Green officially made the switch to Cowboy back this offseason after splitting time between receiver and Cowboy back as a freshman in 2021. Braden Cassity was also thrown into action last season as Logan Carter dealt with injuries. More of a blocking option, Cassity could be a benefit in OSU’s run game.

“But at the same time, Blaine’s a really good player, and we’ve got some tight ends that are making a difference,” Dunn said. “And they’re gonna be on the field, and it helps our run game. It’s a fine line between, do we spread this thing out and get Spencer some running lanes or do we maybe pack in a little bit with a tight end, open up the run game for the tailback, read-zone game, that type of thing.”

All this is to say, after OSU’s offense was hampered in formation flexibility last season, expect things to open up a little bit more in 2022.