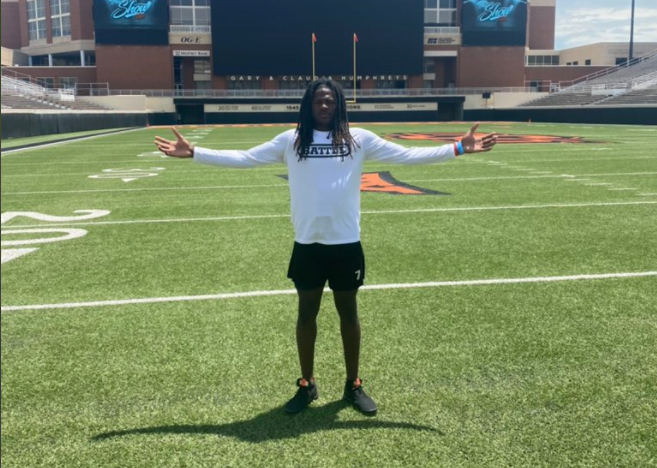 A year-plus dead period finally came to an end last week, opening up the possibility for schools to host recruits and their families.

On Sunday, Monday and Tuesday of this week, Oklahoma State held various camps, followed by official visits the rest of the week, with a whole slew of prospective Pokes attending, as Marshall outlined nicely.

A handful of those in attendance left Stillwater with a scholarship offer in-hand. Here’s what you need to know about each.

Harrison-Pilot tweeted out on offer announcement on Monday from Stillwater. OSU is just the latest in a list of nearly 30 schools pining for Harrison-Pilot’s services, and it’s not hard to see why.

The 6-foot, 185-pound safety is a straight-up playmaker on the gridiron playing both safety and wide receiver for Temple High. He logged 46 tackles, three pass breakups and an interception in 2019 and reeled in 38 catches for 502 receiving yards and seven TDs in 2020. The Cowboys appear to be interested in MHP as a DB.

He’s the No. 13 athlete according to 247Sports composite rankings and the 21st prospect of talent-rich Texas. And Harrison-Pilot is also a three-sport athlete who stars in baseball and track. Mike Gundy would have offered him on that basis alone.

OSU joins a crowded list of suitors including the likes of Florida State, Notre Dame, Miami and Arkansas among many others. Take a look at some of what has all of these schools excited.

Putnam City North defensive end Jaleel Johnson was in Stillwater for OSU’s linemen camp Tuesday, and coaches must have liked what they saw. On Tuesday, following the line camp, Johnson tweeted out a Cowboy offer, his 12th overall.

Johnson appears to be a late bloomer in the rankings, without so much as a star according to 247 Sports, but that hasn’t stopped half of the Big 12’s schools as well as Missouri, Memphis and others from extending offers.

In a shortened junior season with the Panthers, Johnson tallied 49 total tackles, nine for loss and four sacks. He also broke up three passes and forced a fumble.

Take a peek at his highlights from 2020.

The Cowboys offered another in-state defensive lineman who made it to Stilly this week. Del City’s Jaedon Foreman tweeted his out on Sunday after OSU’s mini camp.

Foreman’s first, and until this week, only offer came from Memphis nearly a year ago. He’s still unranked by major recruiting services.