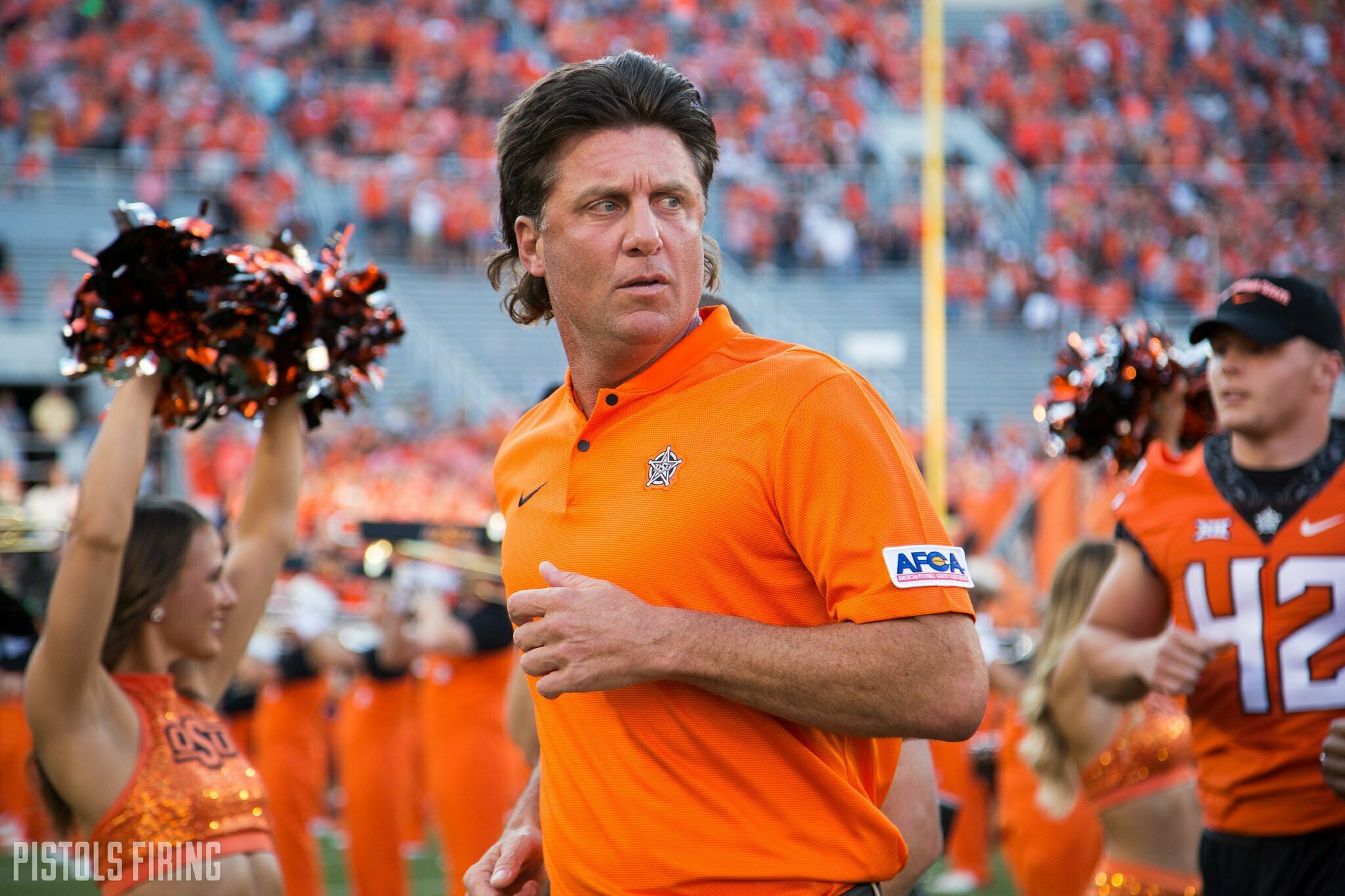 Mike Gundy is entering Year 15 as the Cowboys’ head man, and there have been some remarkable plays in his first 14 seasons.

From kick returns to receivers being more athletic than corners to defensive stops, the Gundy era hasn’t lacked big moments. The people that made those big moments happen have been special, as well. Gundy’s era has welcomed many of the program’s record-holders. Here is the top play from each of Gundy’s 14 seasons as the Cowboys’ coach.

The Cowboys were 3-5 on the year with their wins coming against Montana State, Florida Atlantic and Arkansas State (not necessarily college football power houses), but Gundy got his first win of significance that day.

Freshman running back Mike Hamilton started the day’s scoring with his first collegiate touchdown. Hamilton went 83 yards on the play. The Cowboys went on to win 24-17, but Hamilton set the tone for Gundy’s first Big 12 victory.

OSU’s receiving record book is filled with some ridiculous numbers, and what Adarius Bowman did to Kansas on Oct. 14, 2006 is up there with the most ridiculous.

Bowman capped off a program-record 300-yard receiving performance with a 64-yard touchdown catch in the fourth quarter. It was one of Bowman’s four touchdown catches that day. The others were 54 yards, 25 yards and 55 yards.

The 64-yard catch was Bowman’s final snag of the day (his 13th reception). It’s crazy that that 64-yard catch and run put him exactly on 300 yards.

In their first conference game of the season, the Cowboys matched up with the Mike Leach/Michael Crabtree/Danny Amendola-era Red Raiders. The Cowboys were able to (at least momentarily) right the ship Sept. 22, 2007, thanks to a late 54-yard completion from Zac Robinson to Brandon Pettigrew in the final two minutes.

Tech quarterback Graham Harrell threw for 646 yards that day, the most the Cowboys have allowed in a game in program history. Those 646 yards couldn’t get Tech a victory, though, as Crabtree dropped a fourth-down pass in the end zone.

OSU’s offense was scary in 2008 with the likes of Dez Bryant, Kendall Hunter, Brandon Pettigrew and Zac Robinson, but an unlikely hero emerged Oct. 11, 2008 when the Cowboys traveled to Columbia for a game against No. 3 Missouri.

Damian Davis had four catches through OSU’s first five games, but he showed out against the Tigers. Davis had three catches for a team-high 76 yards and two touchdowns.

Davis was left alone late in the third quarter for his first touchdown catch. The Cowboys had a 21-17 lead after the extra point.

Then in the fourth quarter, Davis out-jumped a Missouri defender and teammate DeMarcus Conner for what would come to be the game-winning points. It was all a part of perhaps the greatest road performance in program history.

The Cowboys entered the 2009 season ranked ninth in the country and opened the schedule with No. 13 Georgia.

2010 – The Greatest Interception in Football History

Before Bedlam 2010, I’m not sure anyone knew this was possible.

Landry Jones rolled to his right before throwing a ball away toward the Sooners’ sideline, but in one of the most heads-up plays in sporting history, Brodrick Brown rose like a salmon and batted the ball into Shaun Lewis’ waiting arms.

OU receiver Ryan Broyles watched in amazement before Nigel Nicholas sent him horizontal. It was a particularly satisfying block for the OSU die hards, as Broyles flipped his commitment from OSU to OU.

The Cowboys went on to lose the game 47-41, but the play was one of the craziest moments in college football history.

We’ll be back tomorrow with Part 2 of the list.