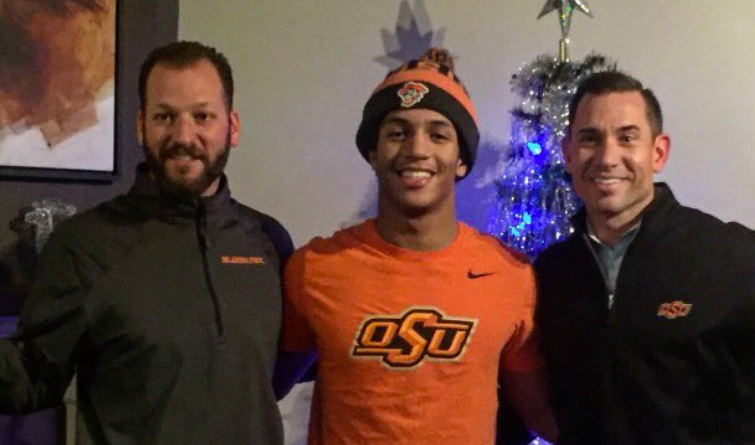 The latest rumors and news surrounding Oklahoma State’s recruiting, with an ear to the ground for what to expect in the future.

Mike Yurcich and Marcus Arroyo made the haul to Canada on Thursday to pay a visit to Oklahoma State running back commitment Chuba Hubbard. Hubbard is a speedster from Bev Facey, who will be one of OSU’s highest rated running back recruits since Herschel Sims.

Had a great home visit today with coach @coacharroyoosu and @Coach_Yurcich! Honestly such a fun time! OSU? #pokes pic.twitter.com/rvPB2PajTt

Hubbard is one of two recruits currently committed at running back in the 201 7 class. Not only is he a highly rated recruit for OSU — he’s the highest rated Canadian prospect, who turned down offers from Alabama, Oregon, TCU and a list of others to pick Oklahoma State.

Just a week after committing to the Cowboys, Coach Duffie and Coach Hammerschmidt visited with safety recruit Malcolm Rodriguez of Wagoner, Okla. Rodriguez is fresh off a state-title game win over Oologah — their third consecutive title behind Rodriguez at QB.

The Wallace duo of Tylan and Tracin are one of the most intriguing in the class. Tylan is an elite receiver, and Tracin, a dual-threat QB, projects as an athlete who could play defense for OSU at the next level. They got a visit from receivers coach Kasey Dunn and his incredible beard on Thursday.

Keeping the two in the fold has been huge. Even with Tracin’s ACL injury, he still appears to be a promising recruit. They will both be exciting players to watch in orange and black.

Gundy takes his mullet to school

The most underrated recruit for Oklahoma State in the 2017 class in my opinion is San Antonio offensive lineman Derek Kerstetter. He has earned Army All-American honors and at 6-5 280, the coaches are very high on him and his potential as a left tackle.

Receivers coach Kasey Dunn was also in Arlington on Thursday to pay a visit to receiver commit Braydon Johnson of Arlington Bowie.