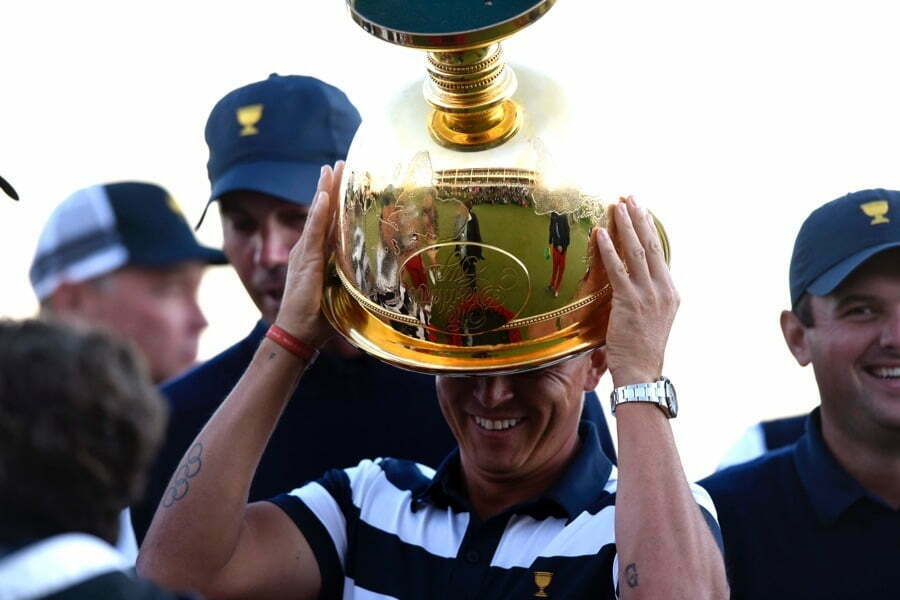 Rickie Fowler was one of three golfers to go undefeated at this year’s Presidents Cup. Fowler, who teamed up with soon-to-be PGA Tour Player of the Year Justin Thomas, went 3-0-1 and eviscerated poor Emiliano Grillo 6 and 4 on Sunday in singles play to help the U.S. to a 19-11 win over the Internationals.

It was the seventh-straight Presidents Cup win for the Americans, and Fowler has been right in the thick of the last two. He is also part of the new young American infrastructure that looks intent on dominating team golf on the global stage for years to come.

The USA is en route to its 3rd straight win in a team event. That's happened just once since the Presidents Cup started (2007-2009).

The U.S. more or less had the event wrapped up on Saturday evening before singles play even started. They were up 14.5 to 3.5 after Saturday’s matched and needed to win just one or split two singles matches on Sunday.

“I mean, to come here and play as well as we did as a team, I mean, the International Team are world-class players,” said Fowler. “There are some matches that could have went either way. We played really good as a team. To put up that many points on the board — I know it probably wasn’t the best of days today but as a team we put ourselves in a pretty good position.”

During one of his off matches, Fowler actually joined some American fans in the stands to cheer on his teammates. It was a small gesture, but it was also a microcosm of a bigger picture with this U.S. team and these U.S. players.

“We have a dynamic here that is different than I’ve seen,” said Phil Mickelson. “That is these young guys are not only great players, fiercely competitive, but they have a quality that’s taken me decades to acquire, and that is they are genuinely happy for each other’s success. That type of support amongst each other, even though they are competing against each other, brings about a really special energy and dynamic to this team.”

This is overwrought, but it’s also true. Jordan Spieth recently called Fowler one of “the nicest human beings in the world”, which in the cutthroat world of professional golf, I’ve certainly seen to be true. Again, this gets overplayed by TV media and others looking for #narratives, but that doesn’t make it false.

Long gone are the days of the best players (like Mickelson and Tiger Woods) not getting along. The Justin Thomases, Jordan Spieths and Daniel Bergers of the world are all uber competitive, but there’s also a camaraderie that didn’t seem to be there in the past, at least with the Americans. And Fowler is paving the way.

I don’t know if that helps the U.S. win team events like the Presidents Cup, but I don’t think it hurts (/whispers the Europeans have been doing this for decades and they’ve owned the Ryder Cup).

“You don’t get a performance like we had this week without that little something extra, that little special something, and these guys brought it out in each other.”