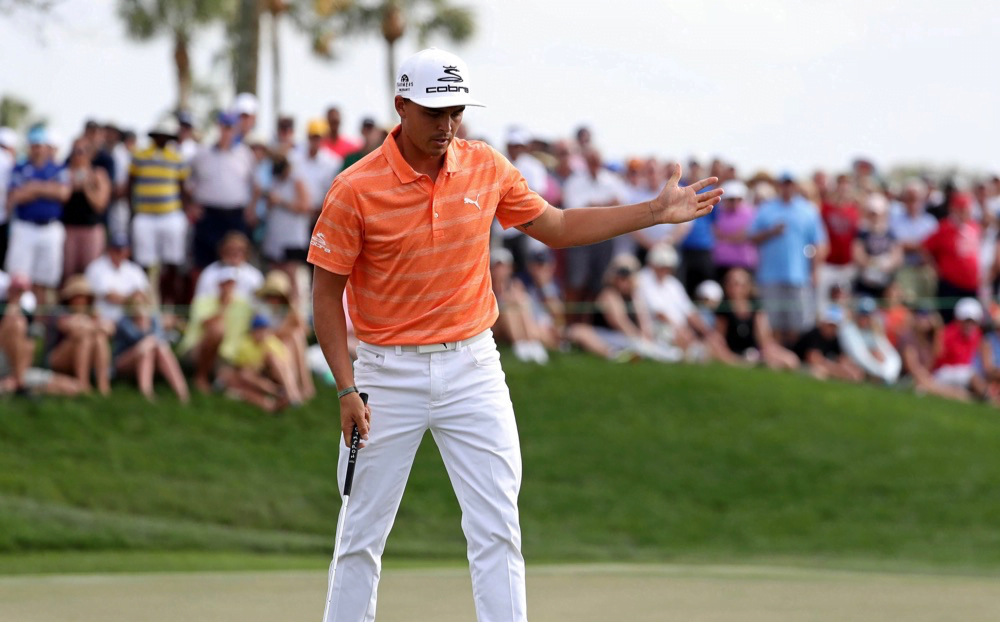 Rickie Fowler joined a murderer’s row of PGA Tour winners in 2017. Jordan Spieth, Dustin Johnson, Justin Thomas, Hideki Matsuyama and Jon Rahm all preceded him in the winner’s circle this year, but Fowler got his first of the season on Sunday at the Honda Classic by four strokes over Gary Woodland and Morgan Hoffmann.

Fowler struggled mightily with his driver on Sunday but made up for it by hitting monster putt after monster putt. This included an up-and-down on the front nine from 160 yards for birdie and two bombs (23 feet and 39 feet) for birdie on the back nine.

The dagger came on No. 16, though. Fowler faced a 182-yard second shot on the par 4 in the middle of the Bear Trap. He hit a laser to three feet and rolled it in effectively for the win. Even a bogey-bogey finish didn’t come close to derailing him as he finished one stroke off the tournament record score of 267.

It is, Rickie. #QuickHits pic.twitter.com/tMviBLVLbm

“That one was nice,” said Fowler. “This was a hold 5-iron from about 183, I believe. And I mean, it was perfect. It was almost in gimmie range.”

This is one to celebrate for sure. Especially with Augusta on the horizon. Fowler got a win on the European Tour last year at the Abu Dhabi Golf Championship but has not won on the PGA Tour since the fall of 2015 when he took the Deutsche Bank Championship.

“I’m a lot happier and tonight’s going to be a lot more fun, being that we have this,” he said. “You know, if I wouldn’t have pulled it off today, it would have been a learning experience. It’s special to be able to pull it off, and it wasn’t the prettiest of ways to do it, but this isn’t an easy golf course and this wasn’t an easy day to go play golf on.

Fowler did fight. His first three rounds were won by his driver. 66-66-65, and he was top five in the field with the big stick. His 1-over 71 on Sunday included a litany of bad drives but saw him gain three strokes on the field with his putter. He’s tougher than his fancy commercials would have you believe. He can be downright dogged on the course and loves playing in poor conditions.

“I gave myself enough cushion where I could kind of get away a bad nine, which I started with,” said Fowler. (I was) lucky enough, the putter saved me at times and gave me that cushion I needed on 12 and 13, and made a great swing into 16.”

Fowler is part of an easy-to-root-for group of young golf stars that were all ushered in by the greatness of Tiger Woods. Guys like Spieth, McIlroy and Thomas. Fowler note that he got texts from all of them on Saturday night when he held the 54-hole lead.

“Rory did text me, Jordan obviously, Justin who was out on 18 green. It’s great to have the support of guys that I have either looked up to, enjoy watching, love seeing them play well, and I want to see those guys play well. And we all want to beat each other when everyone is at their best.”

Fowler now has four wins in 179 PGA Tour starts which is good, not great. His wins have all been at big boy tournaments, though. Honda, Players Championship, Deutsche Bank Championship and Wells Fargo.

“I still need to put myself in position, be consistent and win some more golf tournaments,” said Fowler. “Obviously seeing what Hideki was doing end of last year, start of this year; even Justin Thomas going on a run; Dustin’s always been an impressive player. I mean, what is it, ten years now, he’s won on Tour every year at least once. And obviously Rory, Jordan, Jason; I’ll try and sneak in the back end right now.

“But I want to continue to play well and I want to be, whether I’m talked about with those guys or not, I just want to play the best that I can and keep pushing myself and ultimately just keep trying to put myself in position to win and start collecting more of these.”

Fowler will head to Seminole Golf Club for the much-heralded pro-member on Monday before heading to Mexico for the WGC-Mexico Championship which was moved away from Donald Trump’s course at Doral last year.

He will start next week where he spent most of the last two years: In the Official World Golf Rankings top 10.