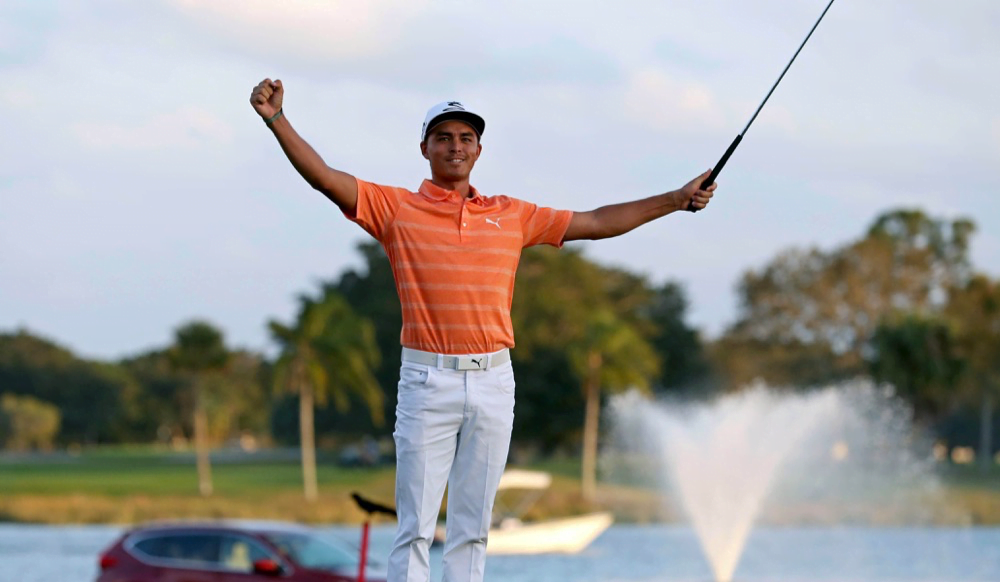 Friend of the blog Adam Sarson wrote a terrific piece on Rickie Fowler today. Fowler won the Honda Classic on Sunday over another Poke, Morgan Hoffmann and Gary Woodland (Kansas) by four strokes. Sarson wrote about why this win, though criticized by some, was impressive.

He addresses the comments of NBC broadcaster Johnny Miller.

It wasn’t the easiest Sunday for Fowler, who entered the final round with a four shot lead and while he ended with that same lead, some loose shots along the way led to four bogeys and a double.

Quality shots and lights out putting also gave Fowler five birdies on the day at the notoriously difficult PGA National, but as Fowler was walking to the 18th tee needing a birdie to set a new course scoring record of -14, NBC’s Johnny Miller decided to take aim at Fowler’s performance.

Johnny: “Obviously a win is a win, but you gotta learn to finish off Sundays like a true champion. He hasn’t learned how to do that yet."

What does that even mean? I get that it’s easy to just blow this off as your typical Johnny bluster and move on to the next topic, but I really just don’t know where he’s coming at with this one.

Like I said above, Fowler wasn’t at his best on Sunday, especially with his ball striking, but what we saw was a player go out and win by four shots in tough conditions on a difficult course when it was clear that he didn’t have his best stuff. Isn’t that what a true champion does? [Sarson]

Yes, it is. Tiger Woods became a billionaire off this formula. Fowler executed it to perfection on Sunday at PGA National, and his performance was actually a lot better than you might think.

Rickie Fowler's 1-over 71 was below the Sunday scoring average at PGA National (71.8).

Only 3 players in the final 10 groups broke par.

Miller was probably referencing the fact that Fowler came into the day 0-4 with 54-hole leads. This is a legitimate qualm, one Fowler has addressed before. On Sunday, though, he was asked about what Miller said. He took the high road.

“I started with a four-shot lead and I still won by four, so I didn’t play great,” said Fowler. “It wasn’t a pretty round. But we got the job done. A win’s a win.”

Doesn’t shooting 66-66-65 in the first three rounds deserve a little credit there, Johnny?

This was just Fowler’s fourth win in nearly 180 starts on the PGA Tour which is a good but not great average. There is a reason he doesn’t win more, though. Jake Nichols wrote about it a few years ago. It’s because Fowler only plays great events and has gotten some truly awful beats in his career. And because he’s been beaten by historic performances, Fowler does not have the pelts hanging on his living room wall of a Dustin Johnson.

But his wins have all been big time. Let’s walk through them all (not just the PGA Tour ones).

2011 Korea Open — Won by six over Rory McIlroy. “If I had played a little better (in the third round) and shot a few under I might have had a chance, but Rickie has played fantastic this week and he deserves the win,” said McIlroy at the time.

2012 Wells Fargo Championship — Beat Rory in a playoff with one of the all-time great playoff shots. Wait, does Rickie own Rory? (Spoiler: No.)

2015 Players Championship — Historic and unbelievable. One of the great closes in the last decade on the PGA Tour.

2015 Scottish Open — Fowler showed off his Sam Cassell-sized cojones on Sunday with this shot on No. 18 at Gullane Golf Club the week before the Open Championship.

2015 Deutsche Bank Championship — Beat Henrik Stenson by one. This was his last PGA Tour win before the Honda on Sunday.

2016 Abu Dhabi Championship — Held off Thomas Pieters by one and Rory McIlroy and Henrik Stenson by two each. So yeah, that’s a pretty freaking good win!

Here’s the reality: Fowler’s game does not match up with the expectations of his game by the general public. His reputation would have you believe he is Rory McIlroy. He is not close to Rory McIlroy. But that’s not his fault. We build those narratives. Not him. He can’t help the fact that he’s nice and generous and easy to market and kids love him and advertisers give him millions of dollars.

And yet it seems old school guys like Miller and others hold this against him. Like, because he doesn’t fill the shoes Puma has sized him for, he’s somehow not worth anything at all. There is a middle ground there (there always is). Rickie Fowler is not the best golfer in the world, no, but his collection of tournaments is pretty tremendous and the future for him is as bright as it has ever been.