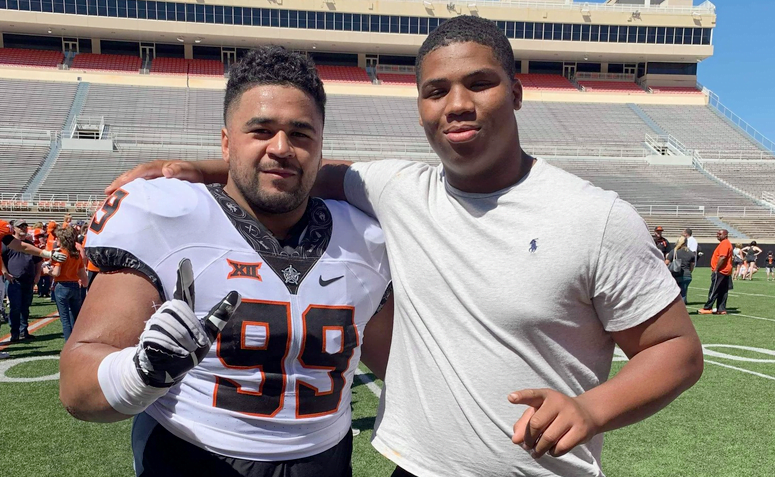 Class of 2022 defensive tackle Walter Nolen was just one of many fresh faces on hand in late April to take in OSU’s spring scrimmage. Now, he’s recognized as one of the rising stars of the class.

The 6-foot-2, 280-pound Olive Branch, Mississippi standout has since garnered offers from LSU, Ole Miss, Tennessee and Mississippi State as his brand has blown up. And OSU, which hosted him on campus just before he was fully discovered, has officially joined the mix with an offer on Tuesday.

Excited to say that I have received an offer from Oklahoma State University @OliveBranchFB @CowboyFB pic.twitter.com/t13jxi4dQ5

Nolan isn’t ranked by recruiting services just yet, but it’s only a matter of time. He saw his first action in varsity as a freshman last season, and his limited snaps were awe-inspiring enough to earn him an impressive offer sheet this spring.

Nolan is originally from Memphis, Tennessee, a place OSU doesn’t typically recruit. But OSU does have one Memphis representative — defensive lineman Amadou Fofana — on its 2019 roster that could help with the Pokes’ pitch.

OSU has just started turning its attention to the 2022 recruiting cycle over the past few weeks, and Nolan is an early beneficiary of that. He’s the second defensive tackle offer in the cycle joining Dallas (Skyline) product Bear Alexander, and one of a select few who aren’t from either Oklahoma or Texas.