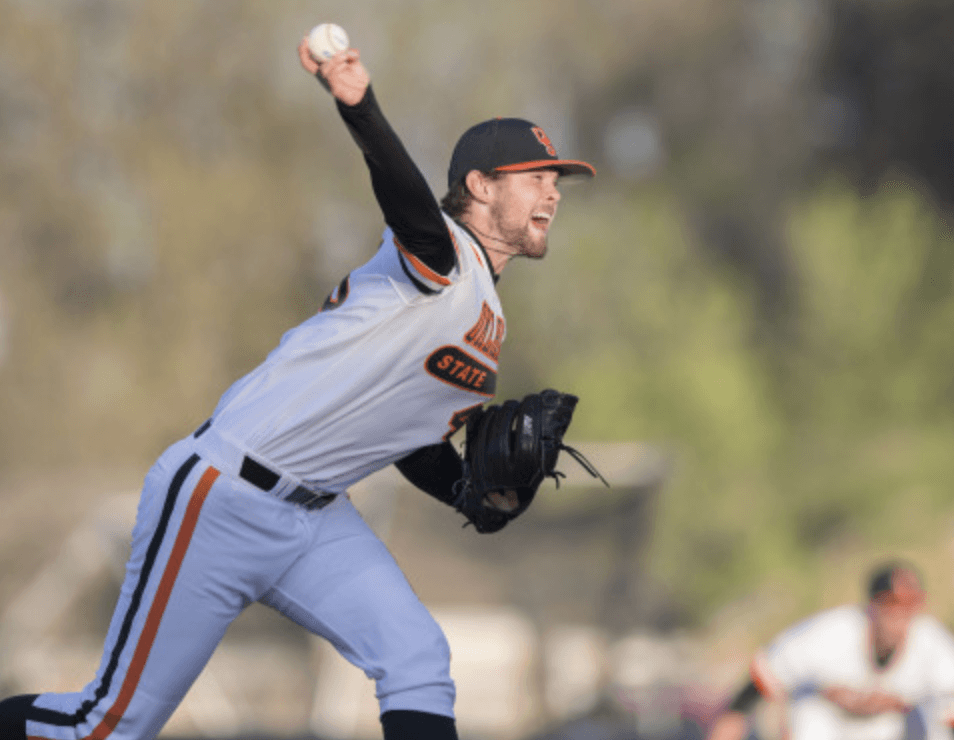 Jon Perrin struck out seven but didn’t factor in the decision Friday night against UT. Photo courtesy of OSU Athletics.

A midweek loss was a setback, but it was a showcase weekend for OSU: the pitching staff allowed five earned runs in 36 innings, the hitters amassed 31 hits, and the Cowboys swept the Longhorns back to Austin.

It proved to be a difficult road game in Tulsa for the Cowboys. Oral Roberts was on a seven-game winning streak thanks mainly to the offense, and the Golden Eagles kept that going by scoring two runs in the 1st. OSU answered back in the 4th, with Conor Costello hitting an RBI sacrifice fly followed by a Dustin Williams RBI single.

ORU’s top-25 offense came to life again in the 8th when second baseman Anthony Sequiera crushed a double to left-center field, scoring what turned out to be the game-winning two runs. The Cowboys got two runners on in the 9th, but were unable to put any runs on the board. OSU is now the third Big 12 opponent ORU has defeated, along with OU and Tech.

Make it 10 straight conference series for the Cowboys, and they won this one in style. The two teams played an unscheduled doubleheader Friday night, the second time in two years OSU has played an 18-inning game. Kevin Bradley hit a two-run homer in the 2nd to give the Cowboys an early lead, and Jon Perrin was back to his usual excellent form on the mound. He was in line for the win before Texas rallied in the 8th to take a 3-2 lead.

OSU rallied again, and Costello tied it with two outs in the 9th. It would be another nine innings before either team scored. Corey Hassel took the mound in the 16th, making his third career appearance. In the 18th, he gave himself his first career win by launching a three-run homer over the left-field fence. The game lasted 6:51, the longest game in Allie P. history.

And then both teams turned around and played again Saturday. It wasn’t the cleanest game, with a combined three errors. Each team used four pitchers and had seven hits, but OSU made the most of those hits. Bryan Case was the hero on this day, hitting his second homer of the year in his first start back from a broken thumb. That proved to be the difference, as Tyler Buffett, Tyler Nurdin and Trey Cobb held the Longhorns to three hits over the final six frames.

Sunday was Michael Freeman Day, and while he didn’t have his best stuff, he still pitched well enough to earn his sixth win of the season. He went eight innings, allowing two runs on four hits while adding seven strikeouts. OSU scored all eight runs in the first four innings, including a career-high five RBIs from Williams, to complete the sweep. The Cowboys are now on top of the Big 12 standings and should be a top-10 team when the polls come out later today.

Hassel played the role of hometown hero this weekend, picking up his first career win on the mound by blasting a walk-off home run at 1:51 a.m. Saturday morning to beat Texas in the 18th inning. He hit .333 (5-15) last week, chipping in two runs, four RBIs and some excellent defense in center field.

Mike Freeman got his sixth win of the year, but I thought Perrin had the better start against Texas. The Olathe, Kansas, native scattered four hits over 6.1 innings, allowing just an unearned run and striking out seven. He was actually in line for the win before UT took the lead in the 8th. If Perrin can maintain this high level, Friday nights will become more difficult for Cowboy opponents.

Yup starting a rally pizza crowd fund RT @_GeraldTracyIII: Holliday and Hassel both mentioned how tired and hungry they were after the gane.

Who’s got a good band name for them?

@HHagler6 on guitar @Candyman1111 on the drums and myself on the bass. Keepin it groovy at Allie P. pic.twitter.com/T53z6rWPzJ

Those commentators were… entertaining.