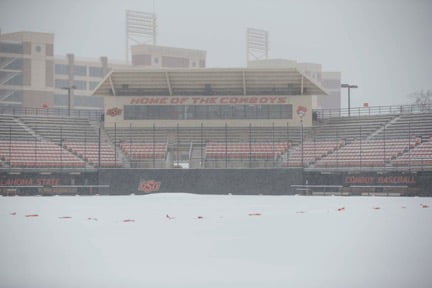 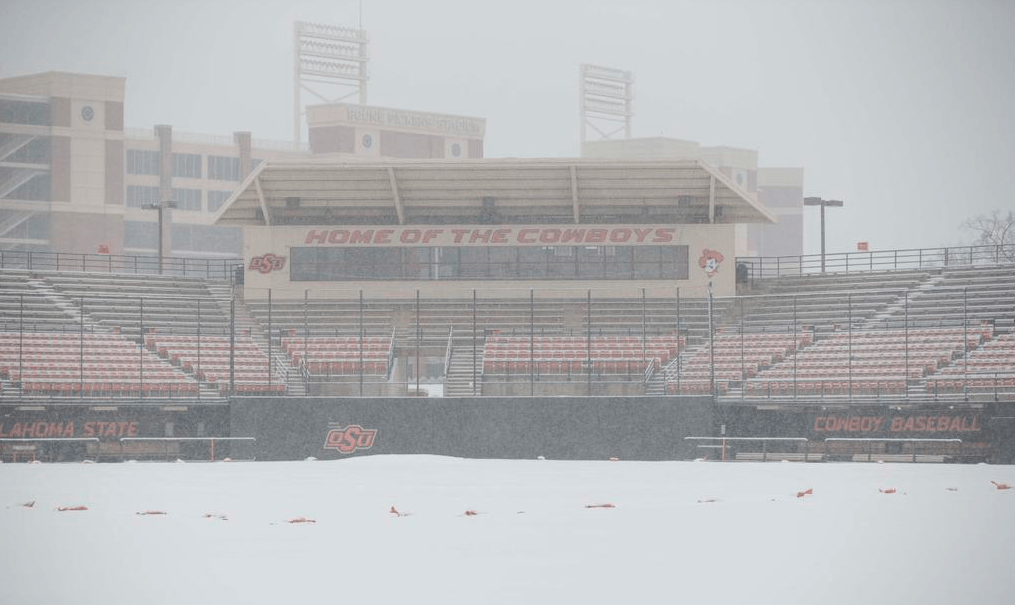 The Pokes win yet another home opener, but a huge winter storm forced the Western Illinois series to move to Auburn University.

The Cowboys had only lost five home openers since moving to Allie P. Reynolds Stadium in 1981, and that wasn’t about to change this season.

OSU took advantage of two Missouri State errors for a comfortable 7-2 win. Western Illinois was set to visit Stillwater for a three-game series, but both teams traveled to Auburn, Alabama to avoid the blizzard that swept through the Midwest over the weekend.

A three-run rally in the 7th, capped by Jon Littell’s RBI groundout, gave OSU a 4-3 victory Friday. The five-game win streak came to an end Saturday against Auburn, a 9-2 beating in which starter Jon Perrin was pulled midway through the 4th after allowing four runs.

The Pokes got back in the win column Sunday against Western Illinois. Starter Michael Freeman pitched an excellent game, allowing just two hits while striking out 10 in eight innings.

Bryan Case, Jacob Chappell and Tim Arakawa provided the RBIs in the 5-0 win.

Offensive Player of the Week
Tim Arakawa, Sr. 2B

With offense at a premium – only three players had a multi-hit game this week – Arakawa proved the most consistent. He was 4-13 from the plate with two triples, and scored five runs while knocking in five more.

The Hawaiian has a hit in every game this season, and has a 12-game hit streak dating back to last season. He now leads the team in runs and RBIs, and is second in stolen bases.

With his double play partner Donnie Walton out with a wrist injury, Arakawa has increased his output and become one of the leaders on this team.

Freeman had the best start of any OSU pitcher this season, striking out a career-best 10 WIU Leathernecks in eight innings, while allowing two hits and no walks.

The 6-8 lefty lowered his season ERA to 2.55 and leads the team with 17 strikeouts, reminiscent of another tall lefty with a penchant for strikeouts…

The reigning Big 12 MVP catching a game before his season begins.

This was an awesome moment.

Great moment before the game as AHC Tom Holliday exchanges lineup with his son and OSU HC Josh Holliday pic.twitter.com/OBibo4pWqx

He’s had two in the past three games.

BREAKING: The #UNLVbaseball and @OSUBaseball midweek series set for Tuesday and Wednesday has been canceled due to weather.

It was going to be a busy week for the Cowboys, but weather affects the schedule for two weeks in a row.

Last week, OSU and Western Illinois came to an agreement with Auburn to use the Tigers’ field to avoid the blizzard that hit Stillwater in the early hours of Saturday, leaving the town under a blanket of snow and ice that made me feel like Thanksgiving and Christmas were right around the corner.

This week, the Cowboys couldn’t find anywhere to host the midweek games with UNLV, and those games have been cancelled with no announced plans to make them up.

That leaves the focus solely on the weekend series against No. 25 Illinois (8-2-1), one of the favorites to win the Big 10 this season.

The Fighting Illini have one of the nation’s top pitching staffs (1.97 ERA, 0.83 WHIP), and have even won with a game-ending hit by pitch this year.

Assuming the weather cooperates, this will be the first home series of the year for OSU. A few quality wins this weekend go a long way when the playoff committee is considering resumes.