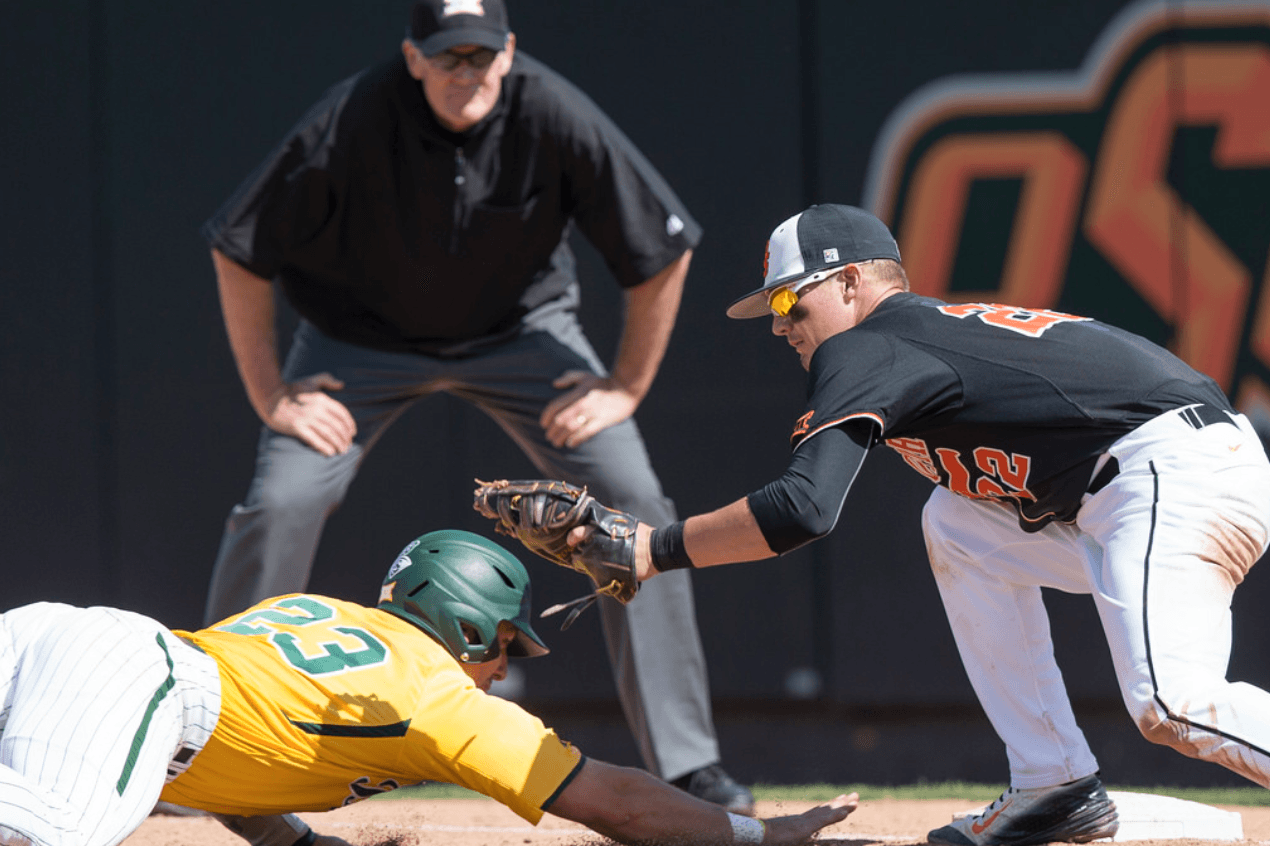 The rain may have changed the weekend schedule, but OSU added two more wins to remain tied atop the Big 12 standings.

After losing to the Golden Eagles in Tulsa earlier this season, OSU was looking for revenge and actually took an early lead thanks to a Dustin Williams three-run homer. However, starter Garrett Williams and relievers Tyler Buffett and Kyle Bagnell combined to give up nine runs in the 2nd and six more in the 3rd to put this game out of reach.

What was supposed to be a typical Friday-Saturday-Sunday series became anything but. The series was pushed back a day to avoid rain on Friday, but Sunday’s game would be suspended in the 6th and completed on Monday, along with the series finale.

The Cowboys were held scoreless in the first three innings of Saturday’s game, finding themselves down 2-0 heading into the 4th. OSU took advantage of two Baylor errors that inning to tie the game, and scored every inning thereafter. Among the offensive stars were Donnie Walton, who hit his first home run of the season, and David Petrino, who had two runs and two hits. It’s the ninth time this year OSU has scored double-digit runs; OSU is 9-0 in those games.

Michael Freeman started Sunday’s game, and picked up his second straight loss – on Monday. He threw six strong innings, allowing two runs (one earned) and striking out seven. But again he got no offensive help: OSU had just two hits while Freeman was in, and just four altogether. Baylor’s two runs in the 4th would make all the difference in this game, and set up the rubber game yesterday.

Three home runs powered Monday’s 7-1 win. Gage Green led off the 1st with his fourth homer of the year, and the Cowboys wouldn’t trail after that. Corey Hassel added a solo shot in the 6th, and Ryan Sluder followed with one of his own two batters later. The win keeps the Cowboys tied with OU for the conference lead.

After missing 19 games during the season for a wrist injury, Walton has made a big impact on his return. He hit .333 last week (4-12), which included his first home run of the year. He also knocked in four RBIs and scored twice, while adding two of his famous sacrifice hits. His average is now up to .328 this season.

Nurdin got his fifth start of the year Monday, and showed the form that had many thinking he would become the next Cowboy ace a few seasons ago. The southpaw from Fort Worth pitched a season-best 8.1 innings, striking out seven Bears while allowing one run on six hits. It seems like OSU may have its starting rotation set, with fellow seniors Perrin and Freeman holding down the Friday and Saturday starts.

The field is always impeccable.

Go follow @OSUgrounds_crew they are the reason @OSUBaseball plays on the best surface in the @Big12Conference if not the nation!

Nice to see the players helping as well.

Only Florida State did it in fewer seasons.

Tulsa people: Better get on this.