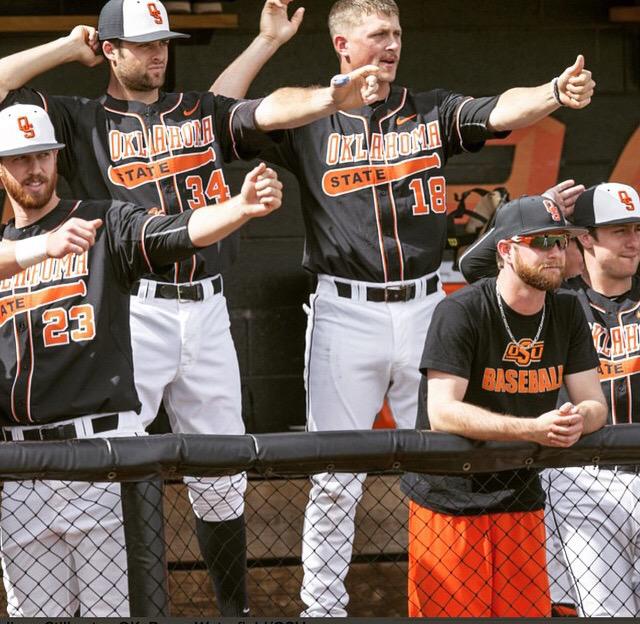 The Cowboys end the regular season with a series win at Michigan, but all the focus turns to the Big 12 Championship in Tulsa this week.

After an extra-innings win in Stillwater last month, the Cowboys traveled to Dallas for a return game against No. 9 DBU. Unlike last month, this game wouldn’t be close. Four OSU pitchers combined to hold the Patriots to four hits, while five Cowboys each had a pair of RBIs.

Donnie Walton led the way, going 2-3 with a double and three runs scored. The Pokes amassed just eight hits, but took advantage of a DBU error in the 8th to plate four runs and put the contest away. The win gives OSU a second quality win against a top-10 opponent, one who just might earn a national seed next week.

This was the first meeting between these two schools, with the Cowboys taking advantage of a rare opportunity to travel north for a weekend. Michael Freeman was moved up to the Friday night spot, but there was no change in his results. He pitched another fabulous outing (earning Pitcher of the Week merits for the umpteenth time on here) and got plenty of run support on the way to his ninth win of the year.

Saturday was more of the same for the Pokes, who capitalized on four Michigan errors to tally 11 runs on 12 hits. Seven different Cowboys knocked in at least a run, and though Jon Perrin wasn’t very sharp (three runs in four innings), OSU earned its 34th win of the year. The Cowboys are now 13-0 this year when scoring 10+ runs.

OSU came out a bit flat on Sunday, which could be partly from TCU clinching the regular-season title during a three-game sweep of the Sooners last weekend. Remey Reed was given the start over Tyler Nurdin, and proceeded to allow three runs in 3.1 innings on the way to his first loss of the year. Walton knocked in both runs in the 5th to draw the Cowboys within a run, but Garrett Williams and Carson LaRue combined to allow three runs in the 8th without recording an out.

The Cowboys will be the No. 2 seed in this week’s Big 12 Championship, drawing a first-round matchup against West Virginia. The double-elimination bracket starts Wednesday, so be on the lookout for a preview on PFB tomorrow.

Walton missed a good chunk of the season because of injuries, but he’s really been making up for lost time the past month. In four games last week, he hit .353 (6-17), scoring seven times and knocking in another six runs. Among those six hits were two doubles and his third home run of the year, matching last season’s total in half as many games. Having a healthy Walton in the lineup will be a huge boon to the Pokes in their chase for postseason glory.

Because who else would be Pitcher of the Week?! Freeman put in his typical performance, striking out eight Wolverines over eight innings while allowing just an unearned run. Freeman is compiling one of the best individual seasons in recent OSU history, and he’ll have a lot of pressure on him to carry his excellence into the postseason.

OSU just has some bad luck with travel this year.

12 hours after getting to the Dallas airport, the cowboys have finally arrived in Detroit..

With his effort tonight, Freeman drops season ERA to 1.06. He's allowed just 6 earned runs in 84 innings over his last 11 starts