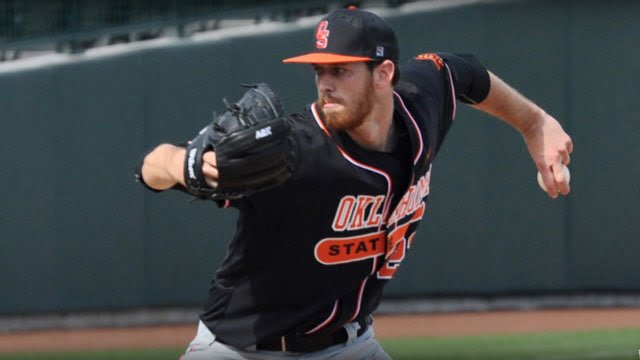 A walkoff win against the RPI #1 team in the country followed by two more in Lubbock has OSU poised to host another Stillwater Regional with just three weeks remaining in the regular season.

Sporting those awesome new stirrups, the Cowboys hosted No. 15 Dallas Baptist on Tuesday with a chance to put a quality win on the resume. OSU scored six runs in the first three innings, but gave it all back in the 4th and 5th, and actually fell behind 7-6 in the 7th.

DBU would fall apart in the 9th though. OSU’s first two hitters reached by error and catcher interference, and after a sac bunt and a walk, Bryan Case hit a grounder that the third baseman couldn’t handle, allowing the tying run to score. Koda Glover pitched a scoreless 10th, and Ryan Sluder would handle the rest from there:

OSU came out of Lubbock with another conference series win – the third against a top-25 opponent – but Tech provided a strong challenge. The Red Raiders actually got to Jon Perrin on Friday, scoring four runs in 5.1 innings. Despite recording five strikeouts, Perrin struggled with command, walking five others. OSU scored twice in the 8th to get the game to 4-3, but a squeeze bunt in the bottom of the inning gave Tech an insurance run to produce the final score.

Needing to win both weekend games to take the series, the Cowboys sent Michael Freeman to the mound Saturday and he turned in another gem. In eight innings, he tied a career-high with 10 strikeouts, while giving up just an unearned run and scattering six hits. Unlike the last few weeks, he got plenty of run support; OSU racked up 13 hits in the game, led by Dustin Williams’s four hits and three runs.

Sunday it was the bullpen that came through for the Cowboys. Tyler Nurdin struggled from the start and was pulled after eight batters, having allowed a run on three hits and two walks. Freshman Carson LaRue came on in relief, giving up two runs in a career-high four innings. However, Gage Green and Ryan Sluder provided the offense OSU needed to make yet another comeback. Sluder led off the 4th with a home run to give OSU a 3-2 lead, and Green added a homer of his own four batters later that would turn out to be the difference. Green finished with four RBIs, tying his career-high, and Koda Glover held on in the 9th for his fifth save of the year.

Offensive Player of the Week
Dustin Williams, Soph. 1B

The Weatherford, Texas, native filled the stat sheet last week. He hit .444 (8-18) with a double and a triple, knocking in four runs and scoring four more himself – and he added his second and third stolen bases of the season. He now boasts the team’s second-best slugging percentage and third-best on-base percentage, and he’s just a sophomore.

It had been a few weeks since Freeman’s name showed up here, but his performance Saturday was one of the best all year. In eight innings, he gave up an unearned run on six hits, and tied his career-high with 10 strikeouts. I wouldn’t be surprised if his name popped up later this afternoon for Big 12 Pitcher of the Week honors.

If you don’t know, now you know.

Loving the mean streak from the Royals #StraightOuttaKauffman

Both are deserving of silverware this season.

I think it’s cool when mascots play along.

More quickly than you know…