It’s that time of the year again: the start of the Major League Baseball season. But college baseball is in full swing, and here’s what you missed with Cowboy Baseball last week:

Again the Cowboys started the week by taking on Missouri State, this time in Stillwater. Both teams had strong pitching efforts, but the Pokes found themselves down by one heading into the 9th. With two outs and a runner on second, Green stepped to the plate and delivered a single to center, tying the game.

Green would come up again in the 11th, and with a runner on first, doubled to left center to give OSU its 10th comeback win and second win against the Bears in as many weeks, 3-2.

Coming into this one, TCU pitcher Brandon Finnegan led the nation in strikeouts and K/9 rate, and continued that streak against OSU as he struck out eight in seven innings. Cowboy starter Jon Perrin kept up with him, striking out eight in eight innings himself, but got no help from his offense. OSU left nine runners on base and struck out 12 times in all, and TCU’s three-run first inning would be all it needed as the Pokes fell, 3-1.

OSU chose to stick with the Goonies theme Saturday, walking off with the win for the second time in the past three games. This time the hero was Tim Arakawa, whose only hit of the night was the most important. Tied at one, Corey Hassel got things started in the 9th with a single, but was caught stealing second.

With two outs, Gage Green kept things alive by getting hit by a pitch. Zach Fish followed with a walk, setting the stage for Arakawa. He delivered with a single to center, giving him his second walk-off hit this season and giving the Cowboys another win, 2-1.

Sunday brought out the fireworks with the Cowboys in their all-orange uniforms. As has become standard, the Pokes fell behind 2-0 in the first inning, but came roaring back in the second thanks to an early TCU error. OSU patiently loaded the bases and, after an RBI single from Craig McConaughy, picked up two more from a Green double.

TCU would retake the lead in the third, but Fish answered right back in OSU’s half-inning with a single to left which was bobbled, allowing two runs to score. He added two more in the 6th with his fifth home run of the year, a shot to the flag pole in left-center.

In all, six different Cowboys crossed the plate as OSU ended the week on a positive note with a 9-4 win.

Offensive Player of the Week

Green was the hero in Tuesday night’s game, but that wasn’t all. This week he went 5-16 (.313) with two doubles, three runs and four RBIs. He also added a walk and three stolen bases, giving him a team-leading 12 on the year.

Pitcher of the Week

This one was close but I think it goes to Wheeland over closer Brendan McCurry (2-0, 5 IP, 0 ER, 2 H, 7 K). Wheeland continued to show why he is a trusted reliever in the OSU bullpen. In three appearances this week, he threw 7.2 scoreless innings, allowing just one hit and striking out four. His crown jewel came on Sunday, when he threw five perfect innings and earned his first win of the season.

Winningest coach in history hosts the Cowboys at the end of April.

One of a few Cowboys who should see some time in the majors this season.

A fantastic, in-depth look at the program.

The Cowboys get their first taste of Bedlam this year when the team heads to Norman for a non-conference[1. Because the Bedlam series is played in OKC and Tulsa, both schools try to play one game on each campus so the students can see Bedlam. The Sooners visit Stillwater on April 15.] matchup with the Sooners (20-9) on Tuesday.

This weekend it’s the Texas Tech Red Raiders who come to Stillwater for a three-game tilt. This is a team that is 18-4 non-conference, including three of four from No. 3 Indiana and a three-game sweep of ORU. TTU has win streaks of seven and eight games this season, but has struggled since Big 12 play began. They won the series against TCU, but lost the series to both Baylor and Texas.

As a team, Tech has an above-average offense, being in the upper half of the conference in most offensive categories. They aren’t the best base runners though, being last in the Big 12 in steals.  The two guys running the show are sophomore Eric Gutierrez and senior Adam Kirsch, who combine for 68 hits and 44 RBIs. Both are among the conference leaders in slugging percentage (both over .500) and walks as well. Sophomore Zach Davis leads the team with four steals, and has seven hits in 14 at-bats this season.

For the second straight weekend, the pitching staff will be the top concern for OSU this weekend. Tech’s staff has a 3.06 ERA (third in conference) and is tied for the most wins. The go-to guy in the bullpen is Jonny Drozd (3-0, 1.39 ERA in 13 appearances), who has 23 strikeouts in 32.1 innings this season.

As for starters, Chris Sadbury (3-1, 2.35 ERA) should present the toughest challenge for the Pokes this weekend. However, freshman Dylan Dusek is 3-0 with a 1.69 ERA in five starts this year, and has a stunning 16/1 strikeout-to-walk ratio. OSU will be in for another weekend of strong pitching.

Three Things To Watch For 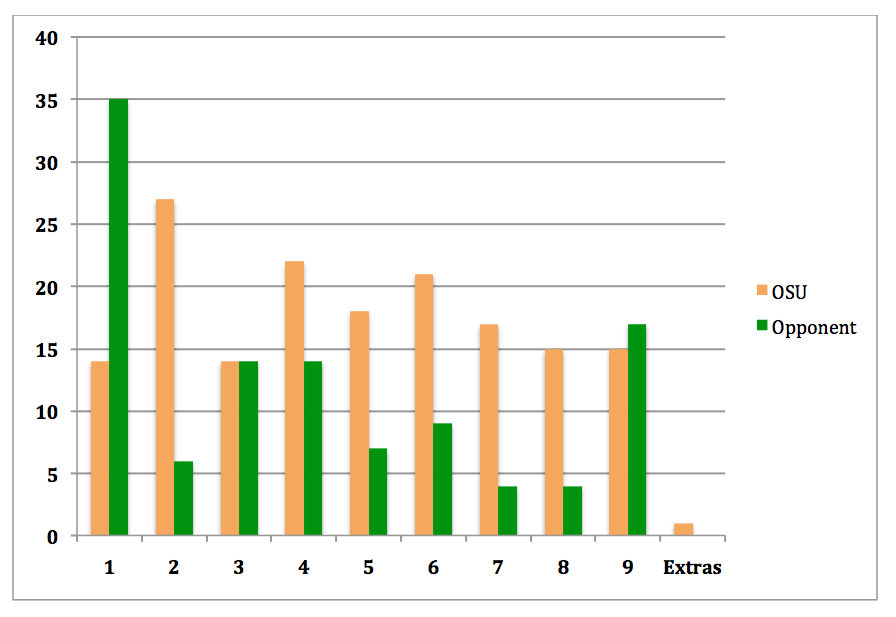 OSU has mostly gotten away with it so far, but as the schedule gets harder, so will the comeback attempts. If Cowboy starters can find a way to make it through the first unscathed, things will get a lot easier for this team.

For Battenfield and the rest of the freshman, this week gives them their first Bedlam experience. Even though it’s a non-conference game, it’s gonna play out more like a championship fight. Bragging rights are always on the line in a Bedlam game, and how the freshmen handle it could set the tone for the rest of the season.

3. In his first year at OU, head coach Pete Hughes has the Sooners on the brink of the top 25 with the Big 12’s best hitter and an offense with the best slugging percentage in the conference. OSU leads the series 7-4 in the past three years, so this year’s squad will look to carry on that recent success.