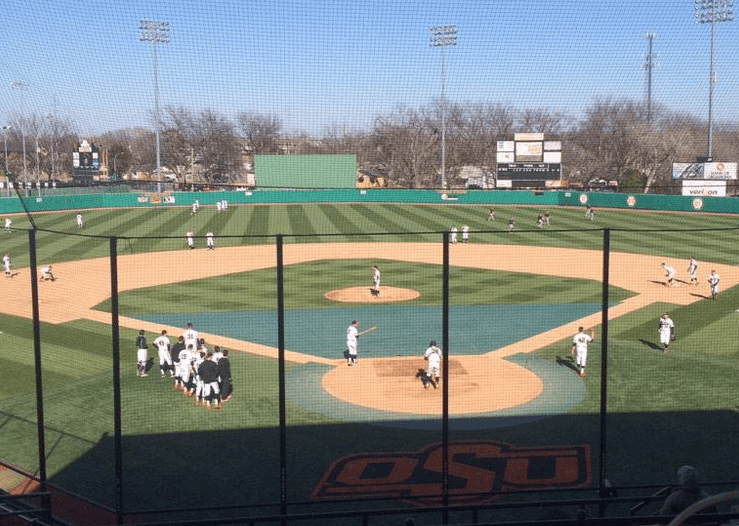 It was a cold week for both Stillwater residents and for Oklahoma State hitters.

Another week, another winter storm, another change to the schedule.

This time, the Cowboys couldn’t find anywhere to host a mid-week two-game series against UNLV and the games were cancelled with no plans to make up. That put the sole focus on visiting No. 27 Illinois.

With Tyler Nurdin struggling to find his form in the past few weeks, Holliday decided to give Blake Battenfield his second start of the season.

The right-hander didn’t have his best outing – he allowed four runs in five innings while walking three – but he also got no run support. OSU didn’t even get a hit until Tim Arakawa singled with two outs in the 6th.

The Cowboys managed to score a run in both the 7th and 8th, but it was too late as Illinois took the first game, 6-2.

The Cowboys got to him early, scoring on a RBI groundout in the 1st and two runs on back-to-back singles in the 2nd. Johnson had allowed just two earned runs in 20.2 innings, and OSU scored three in the first two frames.

The Pokes blew the game open with five runs in the 7th, and Perrin picked up his second win of the season in an 8-1 final.

That left the rubber match on Sunday, and these two teams needed 10 innings to decide a series winner.

Unfortunately for the Cowboys, the Fighting Illini’s David Kerian hit a two-run home run in the top of the 10th to give Illinois a 4-2 win – and more importantly, a series win against a top-25 opponent on the road.

Costello is having a down year, and came into this weekend with a .136 batting average. He responded this week though, going 4-10 with a pair of doubles, scoring twice and knocking in a couple more. He even stole his third bag of the year.

More importantly, he showed more patience at the plate, drawing two walks and striking out just twice. He leads the team in strikeouts and has the worst batting average of any starter, but this week he showed signs of putting the pieces together.

If he can build on this momentum, it will be a huge boost to a Cowboy offense that has lacked firepower early this season.

After struggling last week, Perrin turned in yet another excellent performance in OSU’s only win of the week. The senior starting pitcher spread out four hits over eight innings while striking out five.

His only mistake was the solo home run he allowed in the 8th on a full count. Besides that, he looked like the ace the Pokes expected to lead this pitching staff.

This former Cowboy could be looking at a breakout year.

A good way to get to know the current squad.

Around The Horn With… Michael Freeman http://t.co/ejNDESciEa #okstate

I feel like spring is just around the corner…

This will help give the program a lot more exposure.