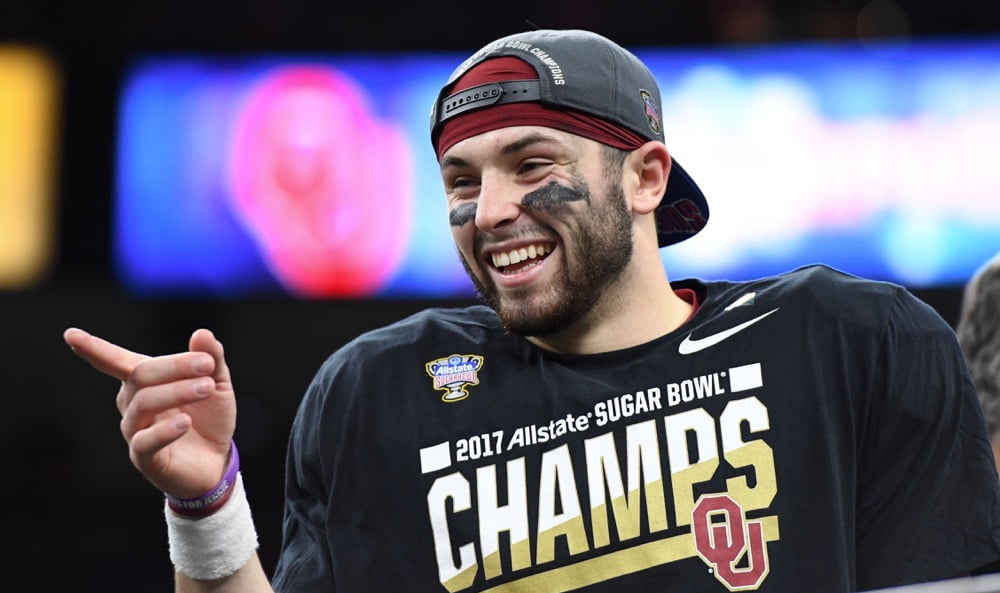 Following the Baker Mayfield arrest last weekend, we decided we had to discuss what his punishment should be for the 2017 season.

Berry Tramel suggested stripping Baker of his captaincy in the Oklahoman today. What do you guys think is an appropriate punishment for No. 6?

I like the captaincy idea plus I would think at least a game suspension. May I suggest November 4? But seriously, I think he should miss some time. Does UTEP count? Yeah, I guess.

It might be too harsh of a punishment, I’m not sure ANYONE could ever deserve this, but they could put some headphones in his helmet like they do in the NFL but instead of hearing his coaches, it’s just Boomer Sooner on a loop all game long….

I take it back. Way too harsh. No one deserves that hell

Seems like stripping captaincy is a bit much. I think you have to take a stance as far as punishment (beyond legal action — like some extra treadmill work), and also make public whatever disciplinary action is taken. But stripping the captaincy of a Heisman favorite won’t happen, and I don’t think a drunken night warrants it.

I go back to the Cole Walterscheid incident. It’s tough for OSU fans to affirm him playing Bedlam last year while simultaneously saying Baker should receiver a stiffer punishment. Granted, Walterscheid didn’t run from the cops like Baker did, but I don’t feel a whole lot of moral conviction here I guess. Give him the Mixon treatment and make him have a presser apologizing and taking questions and then move on.

You would think Stoops may try to make a point (at some point). But why start now, I guess?

I agree with stripping captaincy. If you run from the cops, you aren’t the leader your team deserves. There are other guys who can step up and represent the program.

I’ve never believed suspending a player for a non-conference game, no matter who it’s against, honestly sends any kind of lasting message. I’m with Berry, and I don’t think a suspension should hit until Big 12 play begins, but, hey, who am I kidding, Devonte’ Graham wasn’t disciplined either.

In reality, I think he’ll probably get suspended from UTEP and that will be the end of it all. Depending on the situation, the same charges could probably deam harsher punishment, but it seems like he was not being aggressive and attacking in his resistance of the officer, he was just drunk and obstinate.

I’m sure this is all a PR nightmare for Stoops though. Could have long-term implications for him if they struggle in the win category without Westbrook and Mixon and these small stories keep piling up.

Is there a better chance of Baker being suspended for UTEP and Ohio State or Gundy coaching Bedlam next year in a singlet?

Singlet as sure as the mullet will be there, too.

I think the thing to remember here is I believe this is Baker’s first run-in with the law. Until more information/the video is released, I’m not too sure. I’d guess he misses at least half of the opener, possibly the whole thing. There’s no way though that Stoops keeps him out of the Ohio St game.

I understand the Walterscheid point but (like you said) these appear to be completely different circumstances apart from the “PI” charge. I also think it’s okay to question Mike Gundy’s decisions (which have been above reproach so far, in my opinion). My point being that I don’t necessarily think Stoops should be compared to Gundy and vice versa.

And Gundy is gonna be chilly in a singlet … bring the Carhart.

I’d greedily bet Gundy coaches in a singlet and pom poms before Baker gets suspended for any regular season game.

Well Bedlam is a little earlier this year, but it’s still too cold for a singlet if you’re going to be outside for four hours. But Baker won’t be suspended for two games. My money is on the singlet. I suppose he could wear it under the Phantom Pete hoodie. Tucked in, of course.

Can you imagine a coaching attire matchup with Gundy and the orange singlet on one side and Bill Snyder on the other sporting his 10-year-old AT&T Cotton Bowl win breaker, man.

This sort of begs the question — and this is a mild reference to Joe Mixon as well, I guess — why should football programs be called to go above and beyond the law?

They should, but they don’t have to. The “should” falls to the people in charge and where their moral compass points. You can build a reputation like OU has over the last few years. No one will stop you. But the backlash and criticism comes with it

I don’t think football programs should be called to go above the law as far as punishment. If you have to worry about punishment for a criminal action then you should be worrying about why they are on the team to begin with.

I guess my point is that if you, Hayden, did the same thing Baker did last weekend and your parents (or whoever) bailed you out of jail, there are no repercussions. Your finance professor doesn’t make you do extra problems. Your journalism director doesn’t make you run laps around Edmon Low Library holding a video camera over your head.

Although if he/she does, please send video of that.

That’s a great point by Boone. And that’s why those decisions are so hard to make. How bad is a DUI compared to a fight? It’s a cost/benefit analysis. Goes back to the Mixon thing. If he was a third-string walk on, he would have been gone. And that decision is going to be easier to make.

If I were bailed out of jail from my parents, I believe I would have repercussions. That’s good parenting and good coaching. There’s no need to go overboard with the punishment, but do what you need to do to ensure it doesn’t happen again. Live and learn.

Obviously every family is different with their punishments, but I know while it might not be physical, it’s gonna come out of my wallet and into a lot of family and friends conversations. I won’t have sore calves or less snaps in a game, but my reputation would plummet.

That’s true, Porter. But also they are (for the most part) students receiving an education financed by the state. What happens to a National Merit Scholar who goes and gets arrested? Possibly nothing, but in neither case are they just “normal students.”

Another aspect to consider is the PR of things. These are kids, like it or not, who have a spotlight (and they know it!) If a public figure gets a felony charge and it’s widely publicized, what is their company likely to do? Probably not just ignore it and move on. There are lots of celebrities out there who do dumb stuff and feel the results. In some ways, by taking on this position in a team (and a public position as starter and captain) you are accepting that notoriety. Not sure that addresses punishment specifically, but I think Baker is far from a typical student.

When you’re a part of a bigger organization and held to higher standards, discipline is a must. Maybe you’ve served your time as far as the law is concerned, but this doesn’t always align with the values of the program. You’ve got to be accountable to your teammates and coaches as well. Every situation is different and the responsibility of judgement falls on the head coach (which is why we feel some coaches don’t handle this well, i.e. Tyreek vs Mixon)

Good stuff — thought that might rile you guys up a little bit. I’m with Southwell here. It’s about culture. It’s about creating a culture of accountability to one another that you can’t just do whatever you want even if you’re good at scoring points/TDs. Culture matters in team sports, and punishing people for doing stuff that makes the whole organization look bad is part of that. I just feel like sometimes coaches make decisions based on what outsiders will say and not what their team should expect.

Last one — how many calls has Glenn Spencer made to the Fayetteville PD to see if that cop has any graduate transfer eligibility?

Not as many as Paul Rhoads.

At least one. But I’m sure the officer has been preoccupied reading Bill Snyder’s heartfelt recruiting letter complimenting his form tackling and why he’d be a good  fit in Manhattan.