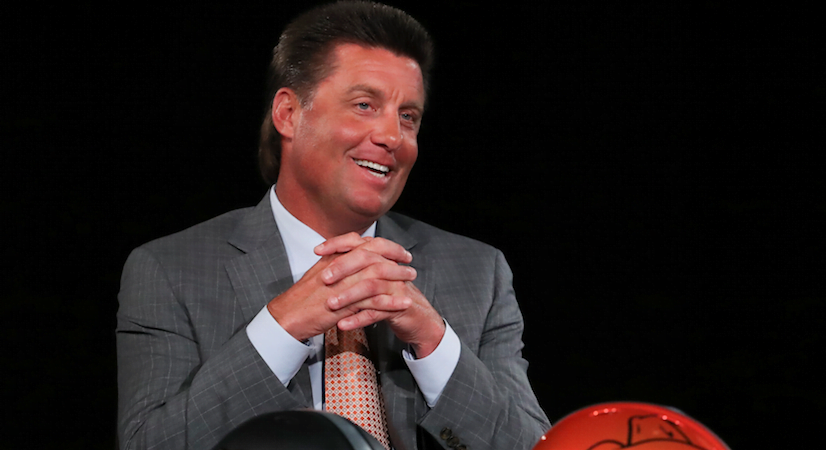 The PFB team discussed our feelings on the coaching rumors surrounding Mike Gundy, our thoughts on what’s going on behind the scenes, and more.

Boone (me): Why do you think his name popped up in coaching rumors?

Cox (contributor): Because he wanted it to.

Sam (hoops guru): Money talks. Gundy Badger deserves a raise, even if this is an awful time to bring it up after Bedlam :grimacing:

Cox: I think the constant frustration/passive-aggressive turmoil between he and T. Boone and Holder is just going to be something that we are all going to have to live with.

Cox: Agreed. Makes sense financially, even if it doesn’t for fans/football/whatever. I think the timing with this Bedlam fiasco is just coincidental.

Caleb: Also, who doesn’t want a coach willing to rock a mullet? Besides like Harvard and Yale and all them fancy-types. And they aren’t worth Gundy’s time anyways.

Thomas (X’s and O’s): I think if bedlam didn’t go the way it did , his name wouldn’t have been thrown out so much.

Caleb: I think he truly is one of the better coaches in the nation, but the “bedlam curse” is hanging over him and it’s probably annoying. He doesn’t necessarily have a problem (ok maybe he does), but it’s probably just more of a hastle than anything. If you can get buckets of cash elsewhere without annoyance…..

Sam: I don’t believe Baylor ever had a legitimate shot at him

Boone: This happens to a lot of coaches, though. Holgerson’s name popped up for the Houston job — then got an extension and raise several days later. Is he doing what coaches do to get a raise or is it something more?

Thomas: Yeah sometimes I get the sense that he’s using it as leverage

Sam: I have no doubt Gundy is frustrated with Holder/Boone though.. and that played a part

Cox: I’m sure it’s to get a raise and to make a point.

Caleb: It’s tough to say if it’s a bluff for a raise or true interest. I would say the jobs connected are the best indicators, so Baylor seems like a bluff, but something like Oregon or equivalent could be an issue if it were real

Cox: it’s a win-win for him… why not talk to them? raise here or more money there.

Caleb: @kylecox that’s a good point. I mean, what is his downside to talking to others? Is OSU going to call his bluff and fire their winningest coach ever? Over rumors of him talking to other schools? Really?

Cox: he’s got all the dominos and has earned them.

Boone: I just feel like its a 100 percent leverage play. The downside, to Caleb’s point, is that he could be fired. It wouldn’t be smart — but I think OSU is tired of him playing the game.

Sam: Holder and T Boone aren’t in control and they hate it. Caleb is right

Boone: He hasn’t earned a right to act this way, at least IMO. Do you see Bob Stoops pushing OU’s hand in public every year? What about Nick Saban? Their pay is different, but I don’t think he’s above it. No one is untouchable.

Is that too much to ask

Cox: Not saying I agree with it. He could talk to 15 schools and it doesn’t get out unless he wants it to… I was speaking in terms that he is pretty much untouchable at OSU. If they fired him, it would not only be a huge mistake it would make them look ridiculous.

Caleb: I think the atheltic department is probably very frustrated with his actions/attitude. I would guess they’ve been hesitant to even consider firing the golden child for years, but with the rising expectations of Cowboy fans and the growing list of quality coaches, as well as the solid footing the program is on as a whole now, I would think they are no longer considering him completely off-limits. Especialy if they think fans are frustrated with the bedlam record

Boone: One final question “to get you out of here on this” (shoutout K-Port): Would you be OK if Gundy moved on this offseason, either by termination or from walking away?

Thomas: I would quickly get over it

Especially if we got monken

Boone: To me: I think I would be OK with it. Depending on who we could get in his place. I am on the #Fuente2Stilly train if it were to happen.

Sam: Depends on the replacement- if we get a Fedora, Fuente? I think we’d be just fine. I don’t want no scrubs.

Caleb: Totally depends on who we could get. Quality coach comes in and it’s a lot easier to look to the future, but it’s a HUGE gamble for Holder. Like, Dwarfs-Travis -Ford-Extension gamble…

Cox: It all depends on who comes in… Look at Texas. The grass is not always greener and it’s a lot harder to win in Stillwater than in Austin. Who really knows if any of those guys will do any better? Charlie Strong was the hottest coach in the country four years ago.

Southwell: It would be a weird time to leave. He’s got a really good shot at going to the CFB Playoff next year. To do that for your alma mater is even better. Legendary status.

So I don’t think I would be ok with that. I’d feel let down. I would get behind whoever replaces him, but I’d want Gundy over all of the other coaches mentioned.

Cox: agreed. this part of coaching isn’t fun but he’s not the only coach that does it. I’m sure UNC fans don’t love Fedora’s name in everyone’s mouth.