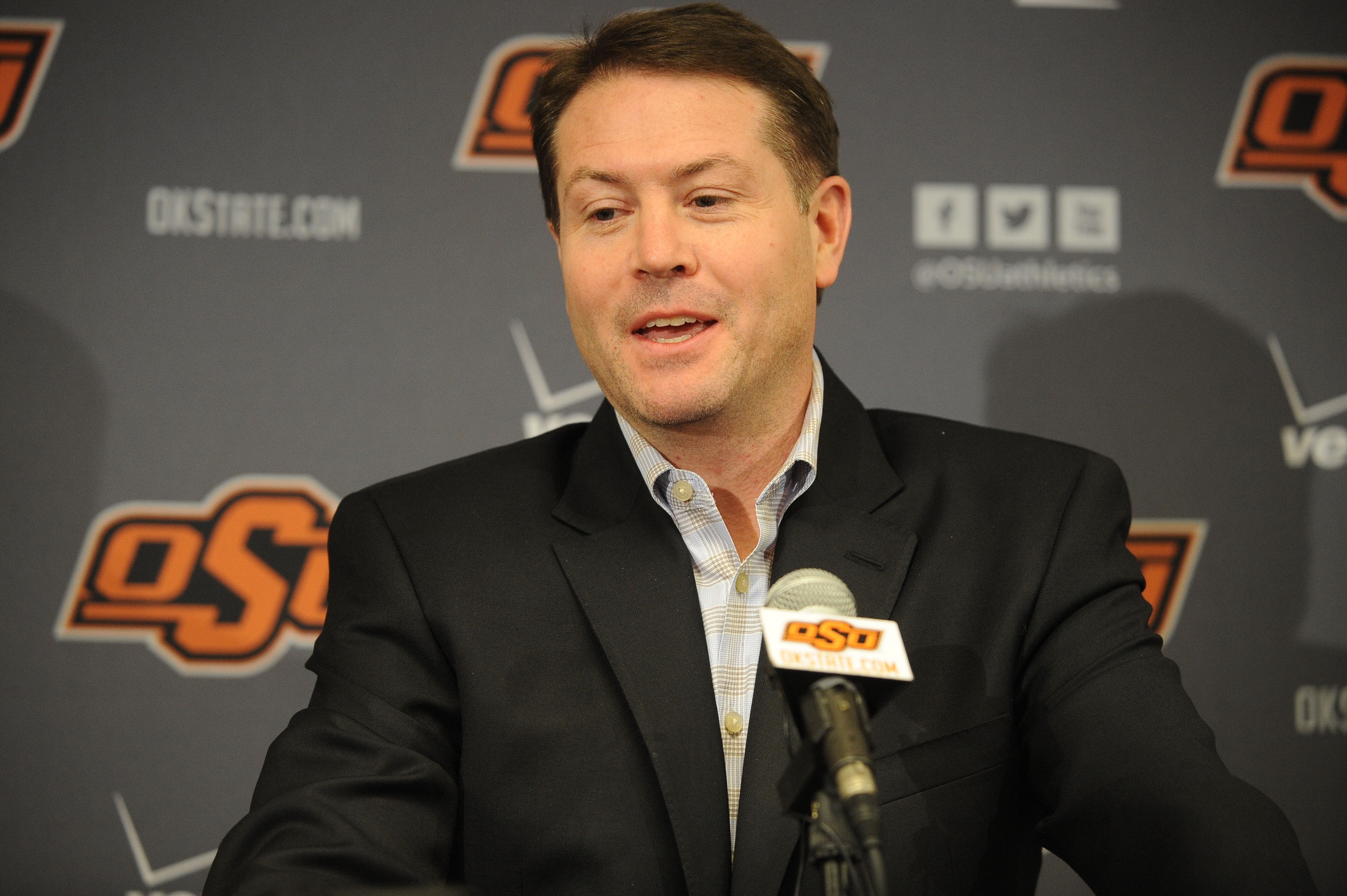 Roundtable Thursday — OKC Dave, Amilian, and Carson joined me for a discussion on what Travis Ford has to do the rest of the season to get himself fired.

Kyle: What does Travis Ford have to do the rest of the season to get himself fired?

OKC Dave: Keep on keepin’ on.

Seriously though, As Amilian pointed out on Twitter, this is Ford’s masterpiece. He’ll take a top 10 pre-season team to the NIT while making the program look like a train wreck and leaving the cupboard bare for next year.

How are those season ticket renewals going to look this offseason? Holder will be forced to determine which option is better: continuing to pay Ford and losing even more of the OSU basketball fan base, or writing him a big check and taking a chance on someone else that can get people back to Stillwater.

I don’t know of a single OSU fan that is in Ford’s corner right now…does anyone else?

The other question Holder must consider is this: do you see OSU basketball improving under Travis Ford? Six seasons in, I have very little reason to believe that it will.

One benefit to keeping Ford: you will figure out who your core die-hard fans are, because those are the only ones who will be showing up.

Amilian: You know you have a serious coaching problem when you start the year as a national title contender and in February your coach says that your players cheering for a walk-on in a blowout loss is a step in the right direction.

Dave, your comment about die hard fans is unfair. Look at Cub fans. They will keep showing up to games whether in first place or last, so there’s no urgency for the front office to make immediate, necessary changes. If Ford isn’t fired, I’m not renewing my tickets because it’s just not worth the time and money.

If Gottlieb gets the job, there’s no question that I’ll renew them.

OKCD: Matt, I don’t have a problem with you deciding not to renew your tickets. My comment was more of an attempt at gallows humor. If Holder keeps Ford, he could probably block off a couple days on his calendar and hand deliver the tickets himself. If someone who loves OSU basketball as much as you do doesn’t renew, we are in a really bad situation.

Let’s get back to the original question. OSU will likely finish 7th in the Big 12 this year (possibly 8th depending on how the rematch with Texas Tech goes). Let’s look at where OSU has been seeded in the Big 12 Tournament under Ford:

Take out the high and low, and every year we’ve been a 7 seed. That is kind of fitting, right? Ford is not a terrible coach, but he’s a bad one. Not up to par with the other coaches in the Big 12. Ford will be fired from his current position; it’s just a matter of when.

Kyle: I wonder if you wiped the slate clean for each school and gave everyone a Bill Self clone as a coach, in what order would each school finish annually. That is, which school is bringing the most to the table in terms of fans/history/tradition/facilities/home court advantage and thus attracting great players and spurring them on to wins. Kansas is first but I wonder how the rest of that goes. My guess is that OSU is, on average, in the No. 3 or No. 4 range.

That being said, not all coaches are made equal and Kansas’ advantage is just exacerbated by the fact that it has a puppeteer like Self pulling the strings. I don’t expect us to win the Big 12 every year — I don’t think any of us do — but five 7+ seeds and one outlier in five years isn’t acceptable at Texas Tech, much less Oklahoma State.

If OSU goes 2-5 or 3-4 the rest of the way AND his contract can be negotiated to an appropriate buyout level (ie: < $4 million) then he’ll be gone this offseason. Side note (and this is embarrassing): I guess I didn’t realize contracts like his could be bought out until Dave mentioned something and I started digging on recent coaches who got the ax (Ben Howland etc.) We paid Sean pretty much everything he was owed when he was fired so that was my reference.

The strangest part of all of this to me is that, if you truly care about the OSU basketball program and believe that Ford is an atrocity, then logically you should be rooting against OSU the rest of the season. It would be tough to fire a guy who just won seven straight to get his team in the NCAA Tournament for the second straight year. I can do it, I guess, but not on Saturday against OU.

Amilian: I don’t think the question is what will Travis have to do to get fired this season, unless the answer is going all Larry Eustachy during one of our last few road trips. He’s done enough.

What if we asked this: “How much would Holder be willing to pay a new coach, on top of what he’s contractually obligated to pay Ford for the remainder of the contract? $250K? $500K? $1M?” (or whatever the buyout would be)

Then the follow-up question: “Will Gottlieb accept that amount?” I’m all in on Doug, and he has nothing to lose by accepting the job with minimal years guaranteed, right? If coaching doesn’t work out for him, the networks will be there to sign him back up for radio and TV.

Can the athletic department raise the amount Doug will require? Absolutely. Is it naive to assume Doug would be satisfied with a 6-figure salary starting out? Maybe.

OKCD: I think Doug would jump at the opportunity as long as we don’t insult him with the salary. I believe that he wants to coach, but he’s so good at broadcasting that it didn’t make sense to toil around in the lower ranks of college basketball to work his way up. Still, that desire to coach is still there. What other school can give him the opportunity to coach at a high level and get paid a salary that will make it worth his while?

At OSU, he would be given the opportunity to work with his brother – assuming he wants to, bring the OSU family back together, and give back to the university that gave him a second chance (and the one he clearly loves dearly). To do it while Eddie can still attend games sweetens the pot further.

I don’t know of any other hire outside of Bill Self that would fire up the OSU fan base more than Gottlieb.

Amilian: We could easily turn this into a “Hire Gottlieb” discussion, but that easily deserves its own post. Not long ago I thought there was zero chance Ford would be gone after this year, things keep getting worse.

As Kyle said, it’s almost like you should be pulling for this team to lose. I remember OU fans having this mindset toward the end of the John Blake years in the late 90s. No, I’m not going to sit in front of my TV and cheer for Iowa State, but I’m certainly able to see the upside in losing.

Kyle: The other thing I keep going back to with Ford is that it’s been six years and he hasn’t constructed a single thing (unless you think Christien Sager is a thing). I hate it when fans try to can a coach/player after 10 games or even two or three seasons just because they want you to be insta-Duke but he’s had 192 games to prove that he knows what he’s doing and he hasn’t even come close.

Carson: I don’t think even die-hard OSU fans realize Dave’s “No. 7 Special” stat on the Big 12 Tournament. That really sums up Ford’s tenure.

About a week ago I was asked if Ford would be let go and I scoffed at the notion, citing the $11 million he is owed. My how times have changed.

The number one way for a coach to get axed, no matter the contract, is if the fans stop showing up. Matt’s Cubs analogy was dead on. Forget all the “Loyal and True” jargon, the fans have one vote: Attendance.

If Gallagher-Iba is crickets to end this season, Holder must weigh: Buyout vs. Empty GIA next year. If Holder is sitting in a half-empty GIA, with a Crimson-laden crowd on Saturday, it may speed up the thought process.

Also, Doug Gottlieb would walk to Stillwater. And I bet there would be a parade waiting.