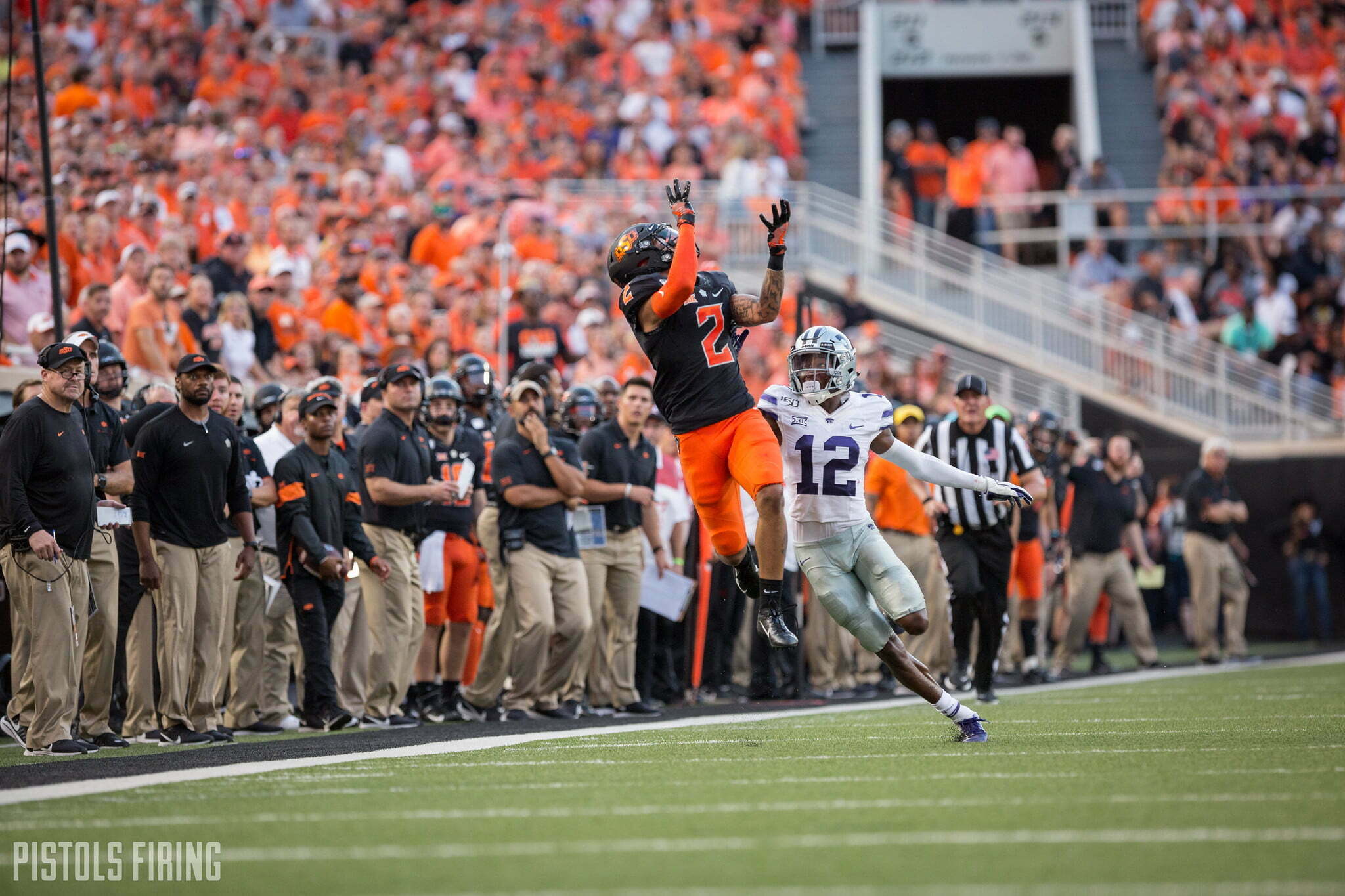 With the (official) news that Tylan Wallace will miss the rest of the season with an ACL tear, we got the squad together to discuss what it means for this season and Tylan’s future in football.

Kyle Porter: Who would you like to see replace Tylan Wallace as Spencer Sanders’ go-to guy?

Kyle Cox: I think the practical choice is Dillon Stoner, but I’d rather see Jordan McCray. And then Braydon Johnson as a close second and home-run threat.

Marshall Scott: I’m going to go with Dillon Stoner. I want to say Braydon Johnson, but it’s hard to tell if he knows all the nuances with him being a bit on the inexperienced side. Gundy talked in the spring about how Stoner knew all of the receiver positions, and it’s been a bit of a shame that he has always been the third or fourth option in the position group. Now is his chance.

Porter: I think I’m going C.J. Moore here. Either you’re the dude or you’re not the dude. We’re approaching the time at which we find out with Moore whether he is or is not the dude.

Kyle Boone: I’d like to see [looks around] Jelani to emerge as Sanders’ go-to weapon. At 6-foot-7 he’s a mismatch nightmare. Plus, Sanders throwing downfield still makes my palms sweat a bit. Giving Jelani a full workload would give Sanders short, manageable throws in the middle of the field and in the flats.

Scott: That’s a smart take, but I don’t have much reason to believe it’ll be done with how little they’ve used him this season.

Porte: Braydon is my guy. Of players with at least eight catches this season, only six guys are averaging more than his 25.6 yards per reception. Wildly underrated.

Porter: I like this fact. Does this have a positive or negative impact on the development of Spencer Sanders?

Cox: I can’t see how it helps him on Saturday. I did find your take on the pod interesting that forcing his hand to spread it out would help him. I’m not sure, though. (edited)

Boone: I looked for a bright spot for Sanders, but I don’t really see how this helps him in any way. Tylan was his comfort blanket and now he’s having it yanked from him. Perhaps this forces him to go through his progressions offensively more often, but when throw it up to Tylan and pray he catches it worked as often as it did, I think any new direction without Tylan in the fold is a downgrade.

Cox: I think it hurts everyone in the building in one way or another.

Scott: I think this could help both Sander’s and Sean Gleeson’s development. With this happening Tuesday, the gameplan might have just bee thrown out the window. Who knows what we’ll get tomorrow.

Porter: I think it’s good for him. Comfort is always a threat to development in any area of life. The problem here is that sometimes development = suffering, and to take another dip on the freshman year roller coaster might get pretty ugly for No. 3 without No. 2. But I think if you’re talking long-term it’s a good thing. Takes.

Boone: My soul wants to believe that.

Cox: I would be closer on that if he hadn’t already been through the meat grinder with TOs. Like, if OSU goes 1-3 the rest of the way, is he the QB next year? I think he is, but it’s at least more of a competition??? If he’s not, then who cares about his long-term development.

Porter: That’s a good point @cox. OSU has gotten so lucky with injury luck over the last decade, which has helped them go on the run they’ve gone on. This is coming at a time they can least afford it from a W/L perspective.

Boone: Fortunately, the best defense in the Big 12 is on tap this weekend.

Porter: Is the over/under for Chuba on Sat. 55.5 carries or higher?

Boone: I think OSU will want to try and get Chuba going early, but it wouldn’t surprise me if the staff played contrarian — knowing that TCU will come in wanting to stop the run — and instead game-planned for Sanders to throw it a ton even without Tylan. TCU’s going to stack the box and dare Sanders to beat them with his arm, so under on Chuba carries and (probably) over on interceptions thrown.

Cox: I wanted to believe in LD Brown taking on a bigger role as RB2 after the big run/nice plays against Baylor, but did he even play in Ames?

Porter: Kick returns only I think?

Cox: Yeah. No carries or targets. That’s insane. With Tylan going down, they need to assign a bodyguard and plastic wrap suit for Chuba to and from the field.

Porter: Hahaha. Ok, last one. Has Tylan played his last game in an OSU uniform?

Cox: Oh man. I’d say almost 100 percent yes if not for how heavy in WR talent this draft class is. I still wouldn’t be surprised if he leaves, nor would I blame him, if he gets a second- to third-round grade. But the chance to stick out more next year gives me at least some optimism he could come back.

Boone: Purely speculating, but I think he winds up coming back. He’s not a first-round lock even at full health, and I think that’s the only projection that would push him out. He can come back next year, have a strong year and hopefully work his way into top-60 consideration in the 2021 draft.

Scott: I think his college career is over. I’m not sure how far he drops in terms of draft stock, but with his brother’s history of multiple knee injuries, it makes too much sense to take the sure money without coming back and risking it another year.

Porter: I’m with Marsh. I think that’s a wrap. Unfortunate — obviously — but also fitting given Gundy’s comp. He finished one catch away from Dez and less than 100 yards ahead of him. Exact same college career.