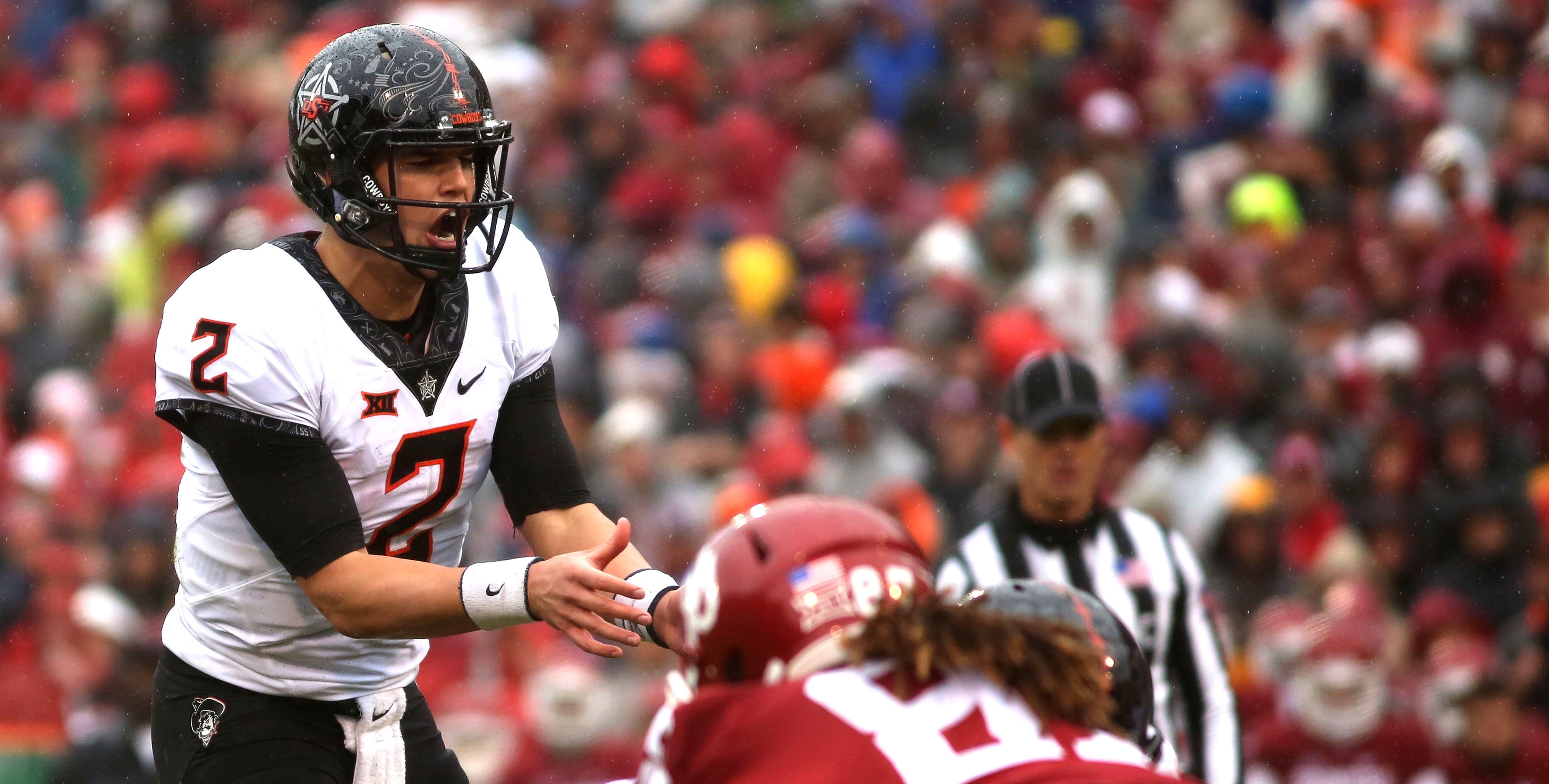 Mason Rudolph’s poor performance on Saturday was not the only reason Oklahoma State lost in Bedlam, but it was a big one. Rudolph was 11/25 for 186 yards and no TDs. He missed receivers all over the field. Rudolph did run the ball quite well, which was a bright spot, but all in all it was probably the worst performance we have seen from No. 2 since the Texas game last year.

Here is Pro Football Focus on his grade.

Rudolph seemed to have problems all game with trying to get a grip on the football, as it seemed to be slipping out of his hands every time he threw … [he] was 0-of-7 on passes between 10 and 20 yards. Rudolph found himself under pressure on 8 dropbacks (out of 29) and failed to complete any of his five attempts, while also taking two sacks. While this was a tough game for Rudolph, it shouldn’t take away from the phenomenal season he had in which he graded out at 89.5 overall, among the best college quarterbacks in the country. [PFF]

I would blame the rain or the conditions but … well, did you watch Baker Mayfield? No, this one is on Rudolph. For all the adulation he (rightfully) received for winning the 2014 game, he has to take the blame for this one (and he did).

“Just a rough day,” said Rudolph after Bedlam. “Honestly, I’ll take all the responsibility for the lack of production, especially in the second half. Obviously, it needed to be better. [My performance was] not great at times. I think I try to do a good job managing the ball in the first half and taking care of the ball and pulling the ball when we needed to but I think our guys up front played well all game and I’ve just got to be more productive … I think we had a great game plan. I think it was just a question of execution on my part and we’ve just got to be better.”

As for whether the weather affected him, Rudolph didn’t make excuses.

“We kind of practiced a little bit all week in preparation for it, but there are certain times when you’re going tempo and the ball is a little more wet at the beginning of the drive than it is when you’re not going tempo,” said Rudolph. “But once again, no excuses. We’ve just got to be consistent.”

Again, no bigger fan of No. 2 than me. He will be fine. He is 21-6 as a starter and just lead OSU to back-to-back 10-win* seasons. To go Gundy on you … in the society we live in, there is maybe no bigger issue than the one that befalls individuals who cannot hold two truths in their minds at the same time. Rudolph can both have been awful in Bedlam (he was) and still be a great college quarterback (he is).

The road issues are a real thing, and we will dive into them more as the season winds down. And I suppose the silver lining here is that there is a sub-zero chance Rudolph will declare for the NFL Draft now so we get another year of him with all those weapons. And one more shot at winning Bedlam.