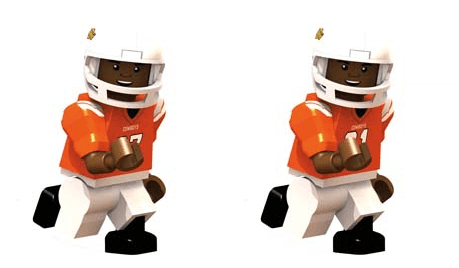 The OSU Cowboys have struggled to find an offensive rhythm this season. Even during their 37-20 victory over the Iowa State Cyclones, the offense sputtered at times with the Cowboys ending their drives in punts, interceptions, and field goals for the majority of the first half.

On Wednesday of this week, Offensive Coordinator Mike Yurcich explained to the media that while on the field execution has been inconsistent, the biggest issue affecting the Cowboys may be their uniforms.

“Well, yeah, sometimes they get out there on the field and they’re so caught up in the jersey and helmet combinations,” said Yurcich, “that they forget to play for the guy next to them. I’ve been thinking it might help if we got them some new uniforms. Maybe something with a different theme? Something like… um… and I’m just spitballing here… but maybe something in the style of… LEGO people?”

Yurcich explained that while the idea may be unorthodox, the payout could be well worth it, and might help the Cowboys improve their abysmal 3rd down conversion percentage.

“I think this would allow our guys to understand themselves as a cohesive unit better,” said Yurcich. “That no matter how different their role in the offensive, they’re all an important part of the same family. They’re like a set of LEGO knights or spacemen… or cowboys. Our players might come with different accessories, but they’re all yellow, they’re all smiling, and they’ve all got interchangeable hands and legs.”

Yurcich also noted that dressing the players like LEGO men could be good for the family-friendly game day atmosphere of Boone Pickens Stadium.

“Yeah, the kids would love it,” Yurcich said, sketching out a horseshoe with smiley faces on it on a nearby marker board. “And if the kids are happy, then it’s a lot easier for the crowd to be in the game, right? I’ve gotten a graphic designer to do some mock-ups if you’d like to see them.”

Defensive Coordinator Glenn Spencer noted that he already uses LEGOs in his practices with the defense, though not for the uniforms.

Spencer described the “gauntlet” as a hallway where the floor is covered entirely with LEGOs, but said that he walks the hallway with his each of his players, coming and going.

“I want to show them support and to lead by example,” said Spencer. “A lot of these guys need to know that there’s always somebody there cheering them on, even when the going gets tough.”

Spencer then spat a small LEGO out of his mouth that he postulated had somehow passed through the sole of his foot and migrated through his body into his esophagus. Spencer said that he was going to get it framed and “hang it on the wall somewhere.”

Head Coach Mike Gundy said that Yurcich had pitched the uniforms and shown him the mock-ups a few weeks ago.

“I think they look ok,” said Gundy. “They’re kind of like when you’ve got a young kid and you have to sit him down and tell him that he’s done something but you give him a cookie instead to make him feel better. They’re a lot like that.”

Yurcich said he has been pleased with the overall positive response by the players and the coaching staff to his proposal and is currently talking to Athletic Director Mike Holder about the uniforms.

“I just really think it will help me—” said Yurcich, “I mean it will really help our guys to be more comfortable with the offense. Yeah, the team. It’ll be great for the team.”