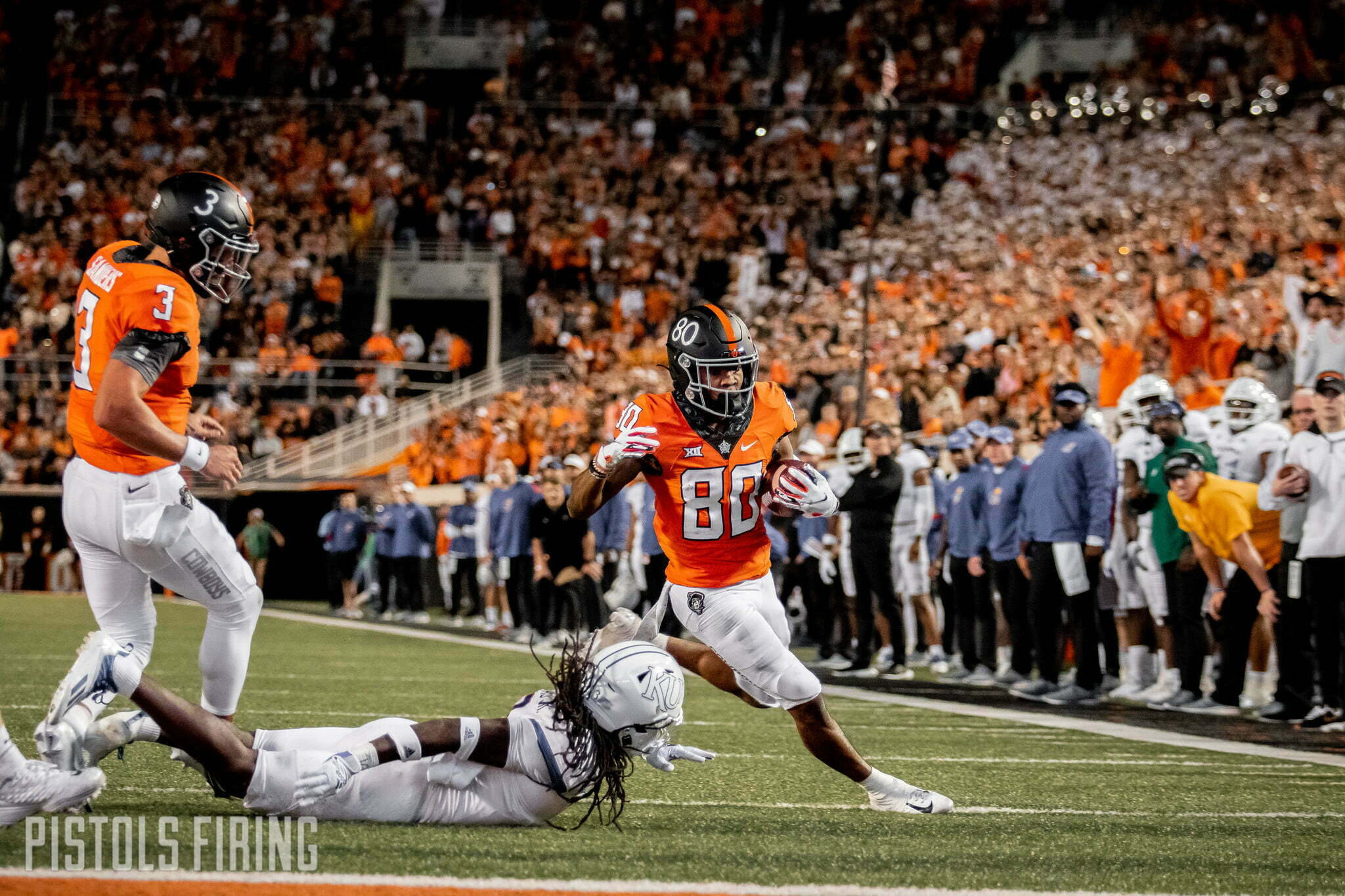 Another sign that football season is drawing closer and closer: the media preseason ballots are due this week.

There is a lot of turnover in the Big 12 entering 2022, which should make for some variation in ballots this preseason. Here is a look at how I ranked the teams heading into the final year the league will have only 10 teams.

Six Big 12 teams finished last season with at least four conference wins — and only one has a returning starting quarterback (assuming the Quinn Ewers era starts at Texas). Oklahoma State is that program, and Spencer Sanders is that quarterback.

Sure, Sanders’ inconsistencies showed at times last season — including in a turnover-riddled appearance in the Big 12 title game — but he is a year wiser after leading a 12-2 team last season. He also had his best season in terms of passing yards, passing TDs, rushing yards and rushing TDs to date last year.

Sanders also has a decent amount of playmakers returning around him. The dynamic Brennan Presley returns after having 619 receiving yards and seven total TDs last season. The big receiving class of Jaden Bray, Blaine Green, Bryson Green and John Paul Richardson all enter Year 2 after combing for 871 receiving yards and seven touchdowns as true freshmen. Then there are a couple of wild cards like a returning Braydon Johnson, who missed nearly all of last season, and a high-ceiling Langston Anderson, who has been unable to get away from the injury bug in his first three seasons on campus.

That’s not even talking about the defensive side of the ball — and particularly the defensive front. Collin Oliver, Brock Martin, Tyler Lacy, Trace Ford and Brendon Evers ought to give offensive fronts fits in 2022.

There are some question marks with this squad, though. Some patchwork needs to be done along the offensive line, and though the linebackers and secondary seem talented, both position groups are inexperienced.

As far as the schedule shakes out, the Cowboys will have to go to Waco and to Norman this season, which will be big games in terms of getting back to Arlington, but with a returning QB and what has to be one of the better pass rushes in college football, the Cowboys get my top spot.

Blake Shapen looked like Dan Marino in the Big 12 title game, but he’ll have to grow in experience with a lot of the Bears’ skill guys in 2022.

Baylor lost its three leading rushers from last season, it’s two top receiving threats and for good measure, all-everything defenders Terrel Bernard and Jalen Pitre are in the NFL. Still, Dave Aranda has proved he can coach, and the Bears’ defense still has one of the biggest X-factors in the conference in 6-foot-4, 350-pound Siaki Ika. If you don’t have a solid interior offensive line, Ika will wreck your entire game.

The Bears host OSU this season but will have to travel to Norman in what will be key games in the Big 12 title hunt.

Dillon Gabriel has had an outstanding college career to this point, but my hesitations into drinking Norman’s Kool-Aid comes in that I’m not sure he is better than Caleb Williams. And Caleb Williams couldn’t lead the Sooners to Arlington last season.

Still, Gabriel brings with him 8,037 passing yards, 70 touchdowns and just 14 interceptions — it’s not like the drop off would be major. And, Gabriel will have the electric Marvin Mims to throw to, who averaged 22 yards a reception in 2021.

The talent will always be there for OU with how the Sooners recruit, so it’ll just be a matter of experience and scheme. There is definitely a world where OU makes it to Arlington and even as the No. 1 seed because the Cowboys and Bears have to go to Norman this season, but all the turnover has me hesitant (as hesitant as one can be with a team that has won six of the past seven conference crowns).

Outside of the top three, I’ll give K-State the lead in the mid-field pack.

The Wildcats went 8-5 in 2021, slipping up against Texas in their final regular season game before thumping LSU in the Texas Bowl. K-State also has a transfer quarterback coming in, and Adrian Martinez seems like a perfect fit for Manhattan. A dual-threat guy, Martinez had 8,491 passing yards, 2,301 rushing yards and 80 total touchdowns in four seasons at Nebraska. That in a purple jersey and silver helmet is probably already keeping Big 12 coaches up at night. His touchdown-to-interception ratio is … not great, though, at 45-to-30 (worse than Spencer Sanders’).

On the defense, K-State returns the Big 12’s leader in sacks per game Felix Anudike-Uzomah and team-leading tackler Daniel Green.

The Wildcats host Oklahoma State and Texas but will have to travel to Norman and Waco. K-State won in Norman the last time it was there. If the ‘Cats can do that again, they’ll be a dark horse contender to get to Arlington.

This feels high because Texas didn’t make a bowl last season and lost to Kansas at home. With that said, Steve Sarkisian does have some returning talent and a highly regarded quarterback entering the fold.

Quinn Ewers was the No. 1 player in his high school class before enrolling early at Ohio State to start raking in some sweet, sweet NIL money. He handed the ball off twice for the Buckeyes before transferring back to his home state.

It’ll be a tough world for a quarterback with essentially no college experience, but he has some returning firepower around him in Bijan Robinson, who ran for 1,264 yards and 11 scores last season, and Xavier Worthy, who led the Big 12 with 1,085 receiving yards and 15 receiving touchdowns last season.

The Mountaineers made some sneaky good additions this offseason by adding Graham Harrell as offensive coordinator and plucking former five-star prospect JT Daniels out of the transfer portal.

Daniels has already had a journeyman college football career, spending two seasons at USC and two seasons at Georgia where he has thrown for a combined 4,840 yards and 32 touchdowns.

West Virginia has a lot of transfer portal turnover, so it’s hard to tell here in late June how all of that will mesh right away. But, Daniels ought to have some good target men in Bryce Ford-Wheaton and Sam James, who combined for 1,080 yards and eight touchdowns with WVU last season. Running back Lyn-J Dixon also transferred in from Clemson after joining the Tigers as a four-star recruit in the 2018 class. He has ran for 1,420 yards on 6.5 yards a carry to this point in his career.

Dante Stills returns on West Virginia’s defense after recording seven sacks and 15 tackles for loss in 2021.

The schedule seems favorable for WVU, as well. The Mountaineers will have to travel to Stillwater and Austin, but they get Oklahoma, Baylor and Kansas State in Morgantown. Splitting those two road games and taking two of those home games could ruin someone’s Big 12 title aspirations.

TCU returns Max Duggan (who somehow still has eligibility) and Chandler Morris for a quarterback battle that has lasted seemingly forever. Duggan has thrown for 5,920 yards and 41 touchdowns in the past three seasons but still always seems like a stopgap quarterback.

TCU lost highly touted running back Zach Evans to the transfer portal but did as good a job as it could in replacing him. Enter Emani Bailey and Corey Wren. Bailey ran for 642 yards on 6.3 yards a carry at Louisiana last season. Wren transferred in from Florida State, where he was a highly touted recruit with offers from Ohio State, OU, Georgia, USC and others. Those two will join returners Keondre Miller and Emari Demercado who combined for 1,069 yards and 11 touchdowns for the Horned Frogs last season.

Tre’Vius Hodges-Tomlinson is one of the more talked about defensive backs returning in the conference. Last season, he had six pass breakups and a pair of interceptions.

New TCU coach Sonny Dykes did an excellent job at SMU. In essentially the same area with a better conference to recruit to, Dykes seems to be in a good spot to elevate TCU, but I’m not sure it’ll happen in Year 1.

Two seasons removed from playing for a Big 12 title in Arlington, the Cyclones have some work to do.

Matt Campbell has two solid cornerstones to build off in star receiver Xavier Hutchinson and all-everything defender Will McDonald. Aside from that, there are a lot of question marks. Gone is the treacherous trio of Brocky Purdy, Breece Hall and Charlie Kolar, who gave Iowa State fans some of their best seasons in recent memory. Now it’s up to Campbell and Co. to find a way to replicate that.

All of the running backs on Iowa State’s 2022 roster have a combined 81 career carries for 372 yards and three touchdowns. Questions marks everywhere.

Early returns on the Red Raiders hiring Joey McGuire seem great. As of writing, Tech has a Top 10 recruiting class for the 2023 cycle, but that’s the future. The present seems less certain.

Tech also has a QB battle ongoing with Tyler Shough and Donovan Smith. Shough got injured last season after transferring to Lubbock from Oregon. Smith came in and throw for 1,181 yards and seven touchdowns in 11 games. A one-time OSU commit, Myles Price is the Red Raiders’ leading returner at receiver. He had 595 yards and three touchdowns last season, but Tech will be without matchup nightmare Erik Ezukanma, who is now a Miami Dolphin.

The Jayhawks haven’t won more than three games in a football season since 2009. Until proven otherwise, they’ll be at the bottom of Big 12 projections.

Devin Neal was a bright spot for KU in 2021, running for 707 yards and eight touchdowns as a freshman. Jalon Daniels seems like the early favorite to start at QB, but Jason Bean could still have something to say about that. That pair combined for 2,112 passing yards and 13 touchdowns in 2021.

The best the Jayhawks could probably hope for in 2022 is another monumental upset while continuing to build for the future.