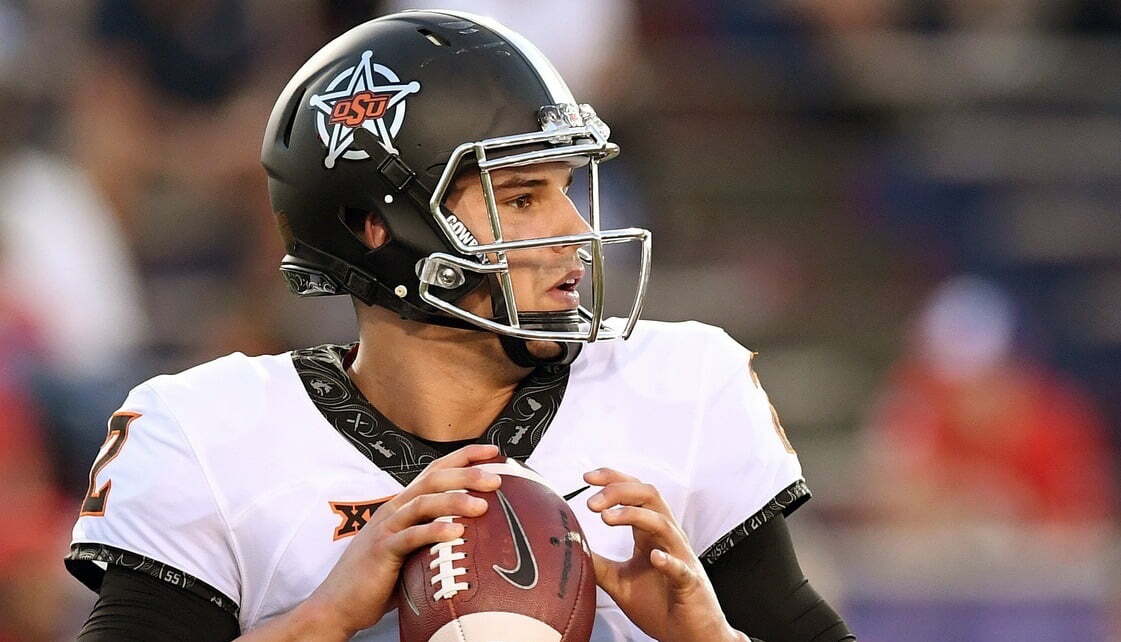 Mason Rudolph made a lot of more difficult throws on Friday than the one he will be remembered for most.

He was only a few yards away breaking Brandon Weeden’s career mark in passing yards. Chris Lacy drove upfield for a 12-yard out. Rudolph gave a play fake to Justice Hill and hit Lacy in rhythm. First read.

It wasn’t the easiest throw in the Cowboys’ 44-7 dub against South Alabama, but it was up there. Rudolph wasn’t particularly tested against the Sun Belt defense as the Pokes’ offensive line only gave up one sack and two hurries. He missed a few throws we all know he can make, but there were some great reads, witty eyes and superb footwork that NFL scouts should be and are getting giddy about.

Let’s break it down.

No fault of his, Rudolph had the offense simplified for him as a freshman. One read, maybe two, fire. As a senior, Rudolph goes through his progressions as well as anyone in the country. Friday, with so much time in the pocket, was a great example.

First, you’ll see him look at James Washington on the go route and Dillon Stoner on the crossing pattern. He sees nothing, re-positions, sets and checks it down. Gain of 10. Against a man defense, Justice Hill against a South Alabama linebacker is a first down all day, and Rudolph didn’t try to go against that. It worked.

Sometimes the progression worked, but the execution fell short, or in this next case, too far. On this next throw, Rudolph went through three reads in three seconds all while standing on the same patch of turf. He delivered a pretty ball, and Tyron Johnson begged for a holding call, but this should have been a touchdown. A big one.

Still, Rudolph’s quickness to his receivers is exceptional. His understanding of the route combinations and coverages is sublime. His recognition of another Cover 1 scheme after looking at his first two reads led him to the backside. He didn’t even look at Jalen McCleskey in the slot because he knew Johnson would be open on the fade.

Here is another similar one just a few plays later.

Early in the first quarter, in fact, the first toss of the game, Rudolph took the snap and stared down the free safety in the middle of the field. With the cornerback pressed on the line of scrimmage against James Washington, Cover 1 was the diagnosis.

Rudolph knew that in Cover 1, the safety was going to watch Rudolph’s eyes. Watch how fast he dials in on the man coverage on the outside and gets rid of the ball.

Rudolph’s conversion from safety to Washington to his release was less than half a second. That’s as good as it gets.

Then came the touchdown. This play was a simple run-pass option, a play that has become widely used across all of football. This play was not simple though, and frankly the way OSU uses it is unorthodox. Rudolph doesn’t look at the edge rusher at all on this play. He watched the strong safety, and when he crashed on McCleskey in the flat, Rudolph’s eyes went to The President.

The safety wasn’t watching Rudolph, but freezing him wasn’t the goal. Freeing that pocket was, and that was done expertly.

So I have a gripe to pick with a lot of college football analysts, NFL scouts and fans: Rudolph doesn’t have bad escapability. He just isn’t as athletic as Deshawn Watson or Baker Mayfield. Why are we blaming a 6-foot-5, 240 pound pocket passer for not running as if he were late for class?

We shouldn’t. Only 1/3 of all starting NFL quarterbacks can run, kinda. The opening weekend in the pros should have been a reminder of that.

Early in the second quarter, South Alabama got one of its only pressures on Rudolph, and he handled it … like a pro. The pocket had double the amount of people it should in it, and Rudolph escaped to his right and re-established any sort of stature he could before dumping it off to Hill in the flat.

That’s escapability if I’ve ever seen it, but people will only point to the next play. The Fighting Sun Belts got past the Cowboys’ offensive line again, and Rudolph couldn’t get past a second time.

People will criticize that he didn’t turn his back and bail to the left using what little God-given speed he has. That’s just unfair. He turned an 8-yard loss into a 1-yard drop. Be thankful, not critical. All right, I’ll get off my pedestal.

This next example is a mix of a lot of different things, and might be his best play of the game.

Rudolph makes at least three reads, feels pressure that he can and cannot see and escapes with a step to his left. With his shoulders facing the end zone, he replanted his feet, his shoulders followed, and he tossed a strike to Dillon Stoner across his body. First down, inside the red zone.

Rudolph got better as the game wore on, but there in the beginning, he missed quite a few throws that could have gone the distance. And while he made good reads, used his eyes well and didn’t force too much, something was a little off.

In this first case, it was his feet. Rudolph had plenty of time here, and he could have done a lot better.

His shoulders were perpendicular to the sideline, and he threw this off his back foot. Given that, Rudolph’s arm power and accuracy were actually pretty impressive here, but you can’t do that.

He did it again later on another third down. The short passing game has always been a blemish on Rudolph’s report card, and this is why. Here, he tries to nurse the ball to a covered Hill underneath and overthrows. It didn’t help he was completely off-kilter.

Now, this last one should have been 6 for the good guys. It ended in 3.

This is definitely the pass Rudolph would want to have back the most. It would have put a bowtie on a terrific first half, but this is one of Rudolph’s biggest points of improvement: The wide-open passes.

“Mason played really well,” said Mike Gundy on Friday. “He missed a guy right down the middle before the end of the half.  Other than that he was pretty good.”

Rudolph had a few Daxx Garman overthrows Friday. Some of them you saw throughout this analysis. None truly mattered, but they might in a couple of weeks. Outside of that, Rudolph had another Heisman Trophy-type of performance and set a record in the process. This team goes as he goes, and he goes like a Duracell battery.