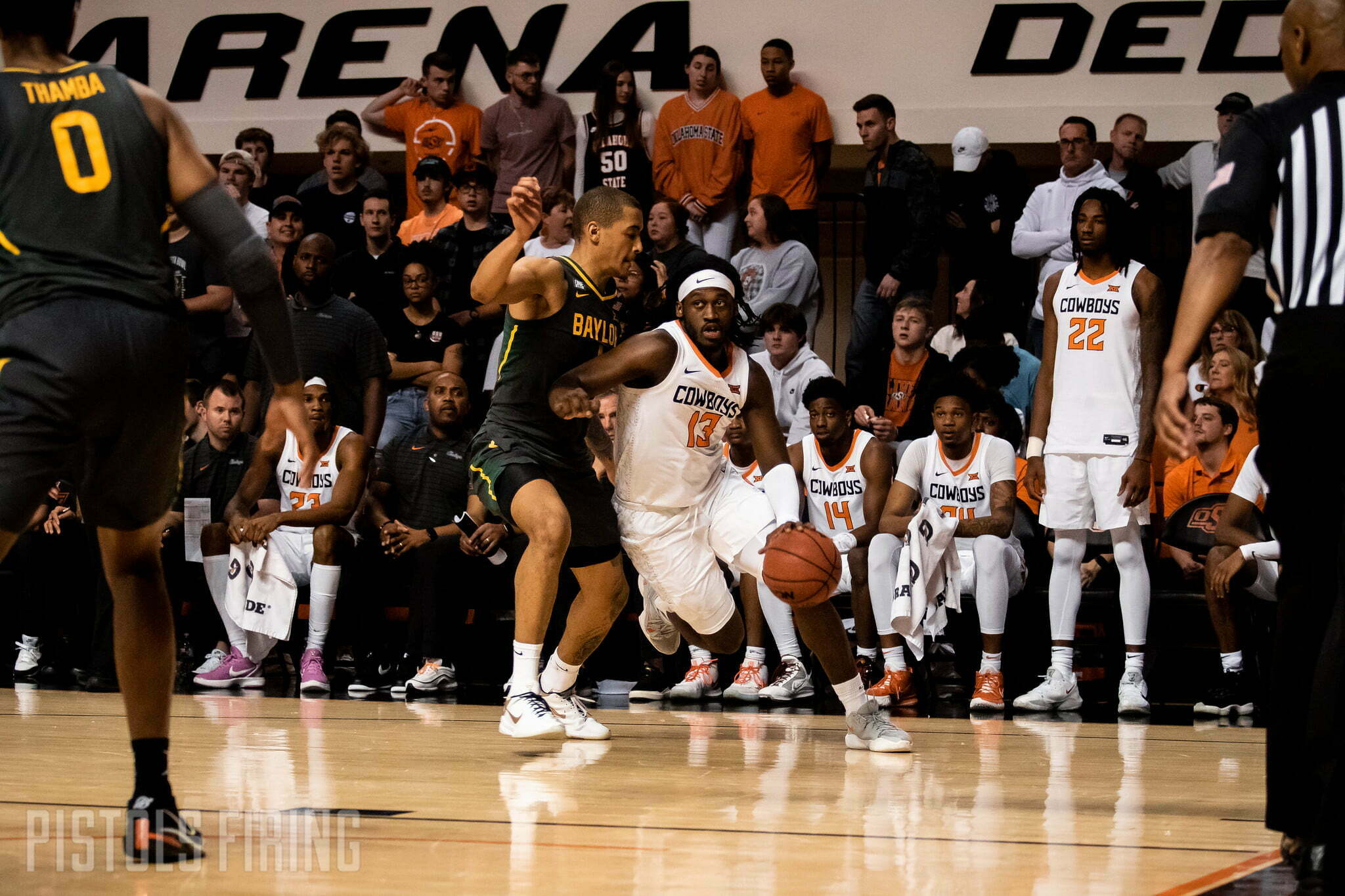 Oklahoma State hosts Texas Tech on Senior Day at 2 p.m. Saturday in Gallagher-Iba Arena. The pair of Likekele and Williams have combined for 1,412 points, 729 rebounds, 568 assists and 216 steals as Cowboys. Likekele could return for a super senior season because of COVID, a decision he said he hasn’t made yet. After transferring from Ole Miss, Williams is already a Super Senior.

Here are a few tales from the two as they wind down their college careers.

The Meaning Behind Williams’ Nickname

Just about everyone on the OSU basketball team has a nickname.

Most are pretty simple to catch onto. Isaac Likekele is ‘Ice,’ Kalib Boone is ‘KB,’ Bryce Thompson is ‘BT’ and Tyreek Smith is ‘Reek.’ But Bryce ‘1K’ Williams is quite unique.

It’s gotten to the point where the media even refers to Williams as 1K. It’s easier that way because there are two Bryces on the team (Bryce Thompson) and two players with the last name Williams (Donovan Williams).

From Tampa, Florida, Williams said the nickname started while he was at Ole Miss. When someone would say, “Hey, we have practice at 2 o’clock.” He’d respond, “1K.”

In one of the first summer practices for the 2018-19 Cowboys before they traveled to Europe for a group of scrimmages, Mike Boynton put his five-man freshmen class on the floor against his returners.

The freshmen struggled getting the ball past center court. The returners were talking smack and having fun. The freshmen looked as if they’d just been given an exam on the differences of simplified and traditional Chinese, that is aside from Likekele. Likekele was trying to huddle up his dazed classmates during timeouts, but all was for not. It was a humbling experience for the new group, designed to show them that they have to work to get better.

Of that group of freshmen, only Likekele remains. Calloo and Jones were dismissed from the program later that season. Demuth transferred to Vermont after the season, and Anei transferred out the season after. Their paths have branched out, but Likekele said he still talks with all of those guys.

“Everybody’s doing good, man,” Likekele said. “Mo’s over there at [Oregon State]. Kent, I talk to him every now and then just to check on him. Chico [transfer Mike Cunningham], he was hooping for a little while, and now he’s moving on to his adult life. Duncan, I haven’t talked to Duncan forever, that’s who I haven’t talked to in forever. But last time I checked, he was at Vermont doing good. I talk to Yor every day. That’s my right-hand man. He’s over at DePaul doing good.”

Likekele’s friendship with Anei was obvious. For one, they were the only two of that group to make it in Stillwater past the first year. Anei entered the transfer portal not long after the initial announcement the Cowboys would be banned from the postseason.

Despite their close friendship, Likekele said it wasn’t too hard on him when Anei left because he wanted Anei to do what he felt was best for him.

“Whenever you generally care about somebody, you want them to always do what they feel like is best for them,” Likekele said. “So whenever he told me, I wasn’t tripping about it. I didn’t think it was the best move for him, but who am I to tell you that? You just met me two years ago, so who am I to tell you what you need to do with your life? But I was just happy for him. Whatever opportunity he felt like was there, I supported him and just wanted him to go fulfill whatever he felt like could get him closer to his dreams.”

Despite Season’s Hardships, Williams Still Happy He Chose to Return

Williams doesn’t like school. He has made it clear.

It was a major hurdle in him deciding whether he wanted to return for a super senior season with a COVID-eligibility waiver. On June 14, Williams announced he would return for the 2021-22 season. After a summer of expanding his game, the NCAA announced days before the season started that the Cowboys would be ineligible for the NCAA Tournament.

Despite that and the Cowboys’ on-court struggles this season, Williams said he doesn’t regret his decision of staying an extra year in Stillwater.

“It’s not really the sport that brought me back, it was really the group of guys,” Williams said. “Even though we losing and might have a bad season right now, or not the season we wanted, there’s still a lot of good that came out of this season — a lot of friendships, a lot of bonds, a lot of memories that I’m going to cherish.”

Since Isaac Likekele stepped on OSU’s campus in the summer of 2018, he has been a leader.

When Likekele joined the program, upperclassmen Cameron McGriff and Lindy Waters were more “lead by example” types, but from those early summer practices, you could tell Likekele’s words had a way of commanding the room.

Whenever his playing days are done, Likekele said he wants to coach. He said he has talked about it with Boynton and that Boynton has shared some of his knowledge with him.

But what would an Isaac Likekele-coached team look like?

“We’re running a man [defense],” Likekele said. “I need guys that can pass. I like skilled passers, I like very skilled passers. I feel like passing is the key thing and in a basketball game. It makes it easier — need skilled passers. Then I just need guys that can shoot to the [3] and lay it up. That’s all I need. … I’m gonna go back to the traditional way of playing, watch. I’m gonna have two bigs. Watch, I’m telling you, I’m gonna have two bigs. Obviously my [power forward] is gonna be able to shoot it, though, but he’s gonna be a big man, too.

“Keylan [Boone] would be the star player on my team because he just plays senseless, That’s the type of style I need.”