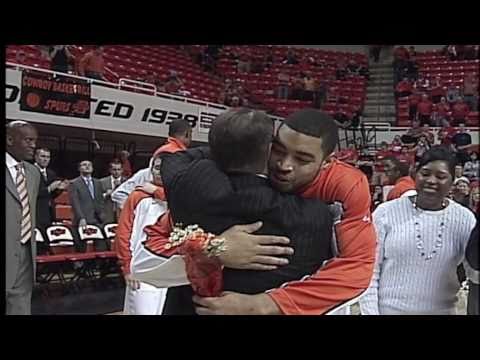 I’m going to give my full thoughts on the Sidorakis, Pilgrim, Moses trio in the Sunday letters this week but first let’s take a look back at what Travis Ford had to say as well as the intro to Senior night. Thanks to John Helsley of The Oklahoman for compiling these quotes.

Marshall came here as a freshman, had a rough time and I think has learned some valuable lessons. The thing I’m proud of with him, starting back to last year, as soon as the season was over with to this point right now, and I want all the people to know this, he has been tremendous. Zero problems. Zilch. Comes to practice every day. Works hard. Working as hard as he could in games, and we’ve ridden him. He’s probably a little bit tired. But he’s given us everything he’s got. On any given night, he can be the best low-post player in the Big 12. And you’re talking about a player I’ve asked to play the center spot. And I’ll say he’s 6-6. And he’s done it with everything he’s got in his body.

It’s been a long road, difficult road, for Matt. It hasn’t been easy. Matt has fought personal things. The way he has finished and played the last two or three weeks, I’m very proud of him. He has played extremely hard. For him to be sitting here, having a chance to graduate, is impressive. I just hope he continues to learn from what he’s been through here and takes it become a better person and a great father — he’s a father now. Good things can happen for him.

He’s a guy who’s been a rock for our basketball team and our program. He’s a guy you could count on every single day. He’s a guy every single player looks up to and respects. I think injuries have held him back at times. But Nick is going to be successful at whatever he does, because he’s very accountable, very smart and he handles himself extremely well around people. He is one of the more mature players I’ve ever been around. And he’s helped us win a lot of games. He understands his role. He’s going to do what he can do to help his team win. I’m very proud of the person and basketball player

These senior night things are always a little awkward, as if nobody knows where to stand or whose hand to shake or where to put their 100-lb. framed jersey. I have to say though I really enjoy seeing the guys with their families. You see them perform on a basketball court for the last 4-5 years but you rarely ever get a glimpse of who they actually are so it’s nice to take a peek behind the curtain and remember that they have real lives and are actually very much like you and me…just with much better jumpers and a lot more hops.